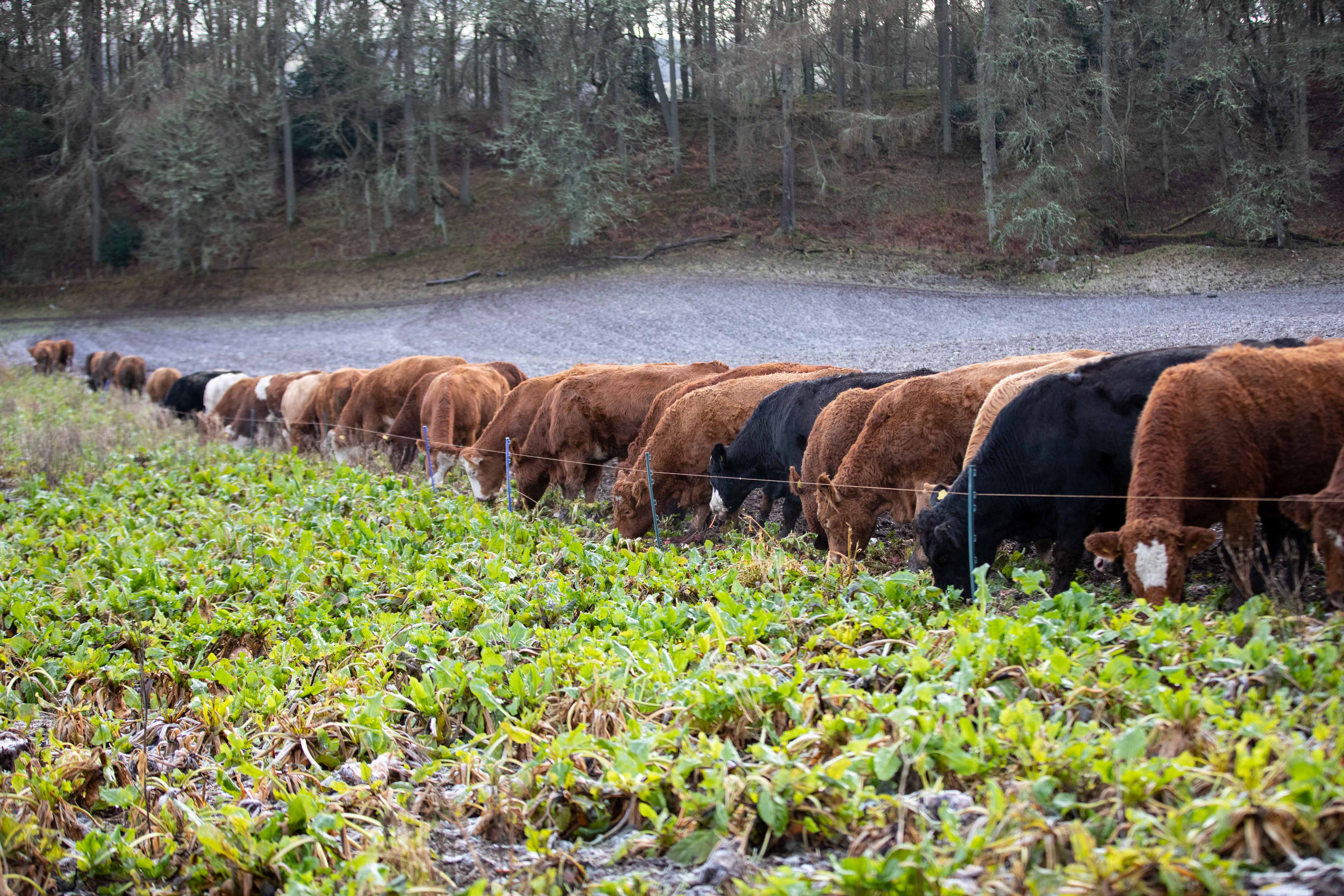 LIMOUSIN GENETICS ‘CRACK THE CODE’ FOR THE FRASERS

In the run-up to the Stirling & Carlisle bull sales, and courtesy of The Scottish Farmer, please find a feature on Donald Fraser,’s commercial Limousin cross herd at Dunain Mains, Inverness…

Donald Fraser, who farms at Dunain Mains Farm, at Inverness, believes he has ‘cracked the code’ to producing the best ‘all-round’ cow for his large commercial suckler herd – and the secret lies with Limousin genetics.

Farming in the steep hills and along the banks of the Caledonian Canal – which runs from Inverness to Loch Ness – brings with it difficult challenges, however Donald and his father, also Donald, are breeding hardy cattle that seem to benefit from their surroundings.

“The Limousin cross cow is an all-rounder. They make for good breeding females, with high fertility as well as producing a fantastic carcass which ideal when producing fat cattle,” said Donald, who’s family have farmed there since 1934.

“We find that the Limousin crosses, on average, last for two calvings longer than the Simmental crosses. They also sell for a third more in the ring and always look fresh for a cast cow, which is a pleasing aspect for any potential buyers,” commented Donald senior, adding that a Simmental bull is introduced as an out-cross when the Limousin part of the equation becomes too pure.

The family have also invested in a Saler bull, primarily for ease of calving with their heifers and to introduce some new breeding into the herd.

Purchasing the right bull is a key aspect to their system and as a result, he has relied on Limousin genetics from Alasdair and Gill Macnab’s, Alagils herd, based at Dingwall.

“When buying a bull, I’m looking for good locomotion, length and legs, as well as female traits such as milkiness and temperament for potential replacement heifers. I like that Alisdair and Gill don’t push their bulls to the extreme, which is what you tend to find with bulls at the bigger sales,” Donald explained.

“I’m able to see them as youngsters, which gives me a clear idea of their potential progeny and if they’ll work in my system, with my cattle.”

Some of the bulls that Donald has used in his herd in previous years include Alagils Juno, a son of Netherhall Gallant – which is a three-quarter brother of Jambon, which sold for 28,000gns, in 2016, at Carlisle.

The herd is split into two calving groups consisting of 125 spring calvers and 100 autumn calvers, with the heifers being brought inside for monitoring during calving. The rest of the cattle are calved outside.

In order to produce a more uniform group of calves, Donald has constricted his bulling period to six weeks for the autumn calvers, and eight weeks for the spring calvers. This may appear a simple system, but it is certainly working as all heifers are calving at two-years-old, with minimal barren rates.

Donald explained: “The bulling period is split between two bulls – either two Limousin bulls, or a Limousin and a Simmental or Saler bull. This helps ensure bulls are working and that all cattle are covered by at least one of the two.”

During the bulling period, Donald purchases a tonne of calf pellets and mixes this with home-grown barley to help take some off the pressure off the cows.

The farm’s sandy and stony low-ground soil is ideal for out-wintering cattle and Donald tries to out-winter as many of the herd as possible. “Our in-calf heifers and cows are definitely in better condition as a result of being out-wintered because they are constantly moving, which means that they are fitter when it comes to calving,” commented Donald senior.

Th spring calvers are all out wintered and fed forage crops, except the old cows and heifers, which only receive silage. Calves are weaned in late September, before being sold in the spring.

The back-end calvers are outside and fed on silage and draft, however cows are run into a shed at night for monitoring and to shelter from poorer weather conditions.

Once calves have been weaned at the end of August, the cows are sent off back up the hill.

“We bring the weaned calves indoors in October and feed them a total mixed ration which includes draff, home-grown barley and silage, in preparation for market,” Donald senior stated.

Calves are then sold through Dingwall and Highland Marts as forward stores at the end of January at 13-months of age and weighing around 450kg. All cattle are sold liveweight through the ring – last year, Donald’s calves returned a profit of £1048 per head, or 234p per kg.

“We find that our cattle are selling in the top end of the sale and we have regular buyers, all who give us great feedback about the calves – it makes the job worthwhile,” commented Donald.

On average, Donald is retaining around 35 replacement females per year in order to maintain a reasonably young and productive herd. Maintaining a high health status is one aspect that is fundamental in producing quality cattle and with a strict culling policy, Donald ensures he is only breeding the best of the best.

“I usually will cull anything that is not in calf, as well as get rid of anything with bad teats, temper or is a failing animal in terms of health,” he stated.

Commenting on the issue of Brexit, Donald concluded: “This is only the beginning regarding Brexit. We’re a marginal farm, we can’t suddenly change to a full scale arable enterprise. The ground we have is already being utilised to its best extent so, of course, we have our worries regarding the beef industry.”

However, Donald is confident that the Limousin breed is the way forward for his business and will continue to flourish in what is an uncertain post-Brexit world that is quickly creeping up on us.

* Business relies on 225 Limousin cross cows all of which are primarily bulled to a Limousin, as well as a Simmental or Saler bull.

* The farm run a closed herd.

* Heifers are calved at two-years of age.

* The majority calf outdoors and progeny are out-wintered and sold as forward stores at the end of January at 13-months of age through Dingwall and Highland Marts, Dingwall.

* Sheep: 750 ewes made up of 150 Cheviots, which are crossed to the Bluefaced Leicester to breed Cheviot Mule females, that are then crossed to a Beltex cross Charolais tup to produce prime lambs, also sold through Dingwall Mart.

* Cropping – 235 acres of spring barley, 380 tonnes are usually bought by Highland Grain for malting, but 150 tonnes kept for feeding cattle on farm.

* Employ one full time employee – Graeme Black – who has worked for the Fraser family for 26 years. Part-time worker, Johnny Milton is also highly regarded by the family.