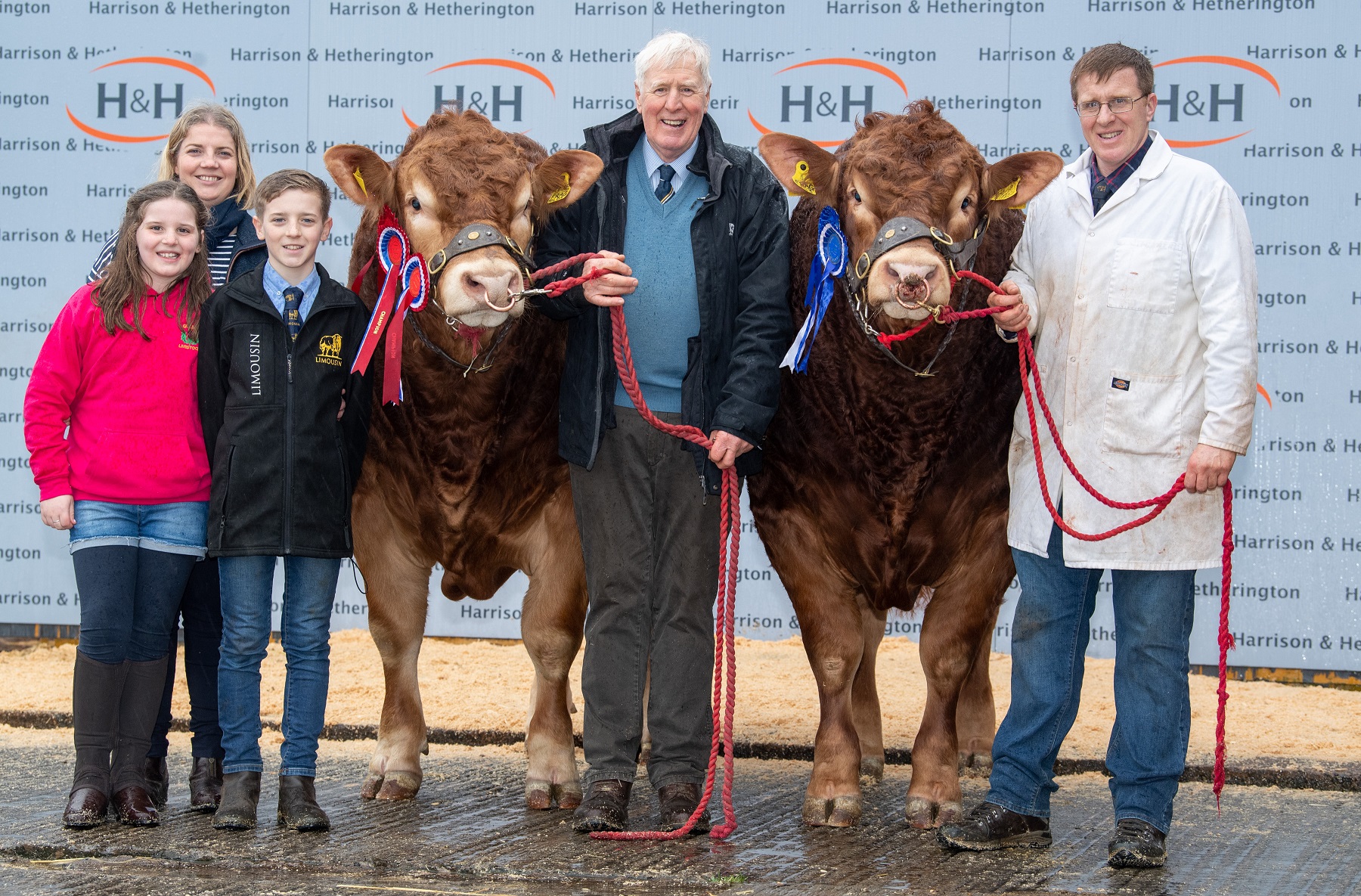 At the British Limousin Cattle Society’s early spring sale held at Harrison and Hetherington’s Borderway Mart, Carlisle on Saturday 15th February 2020, two bulls from Bruce Goldie, Townfoot, Mouswald, Dumfries shared the day’s honours when each bid to 30,000gns. This was for Goldies Olympia & Goldies Owain who had earlier taken the Overall Supreme & Overall Reserve Supreme Championships under judge Michael Alford of the Foxillfarm Herd, Blackborough, Cullompton, Devon. Thought to be a ‘first’ in the modern Limousin era, not only did Goldies take home the top two awards, but this feat was also achieved with two full brothers – being embryo calves by Ampertaine Foreman and out of Goldies Fragrance.

Although the headlines were taken by the five-figure bulls, 12 of the top 16 prices were purchased by commercial buyers and there were plenty of bulls finding homes at all price points. 50 bulls made 5,000gns or more with 40 bulls picked up below the 5,000gns mark. Judge, Michael Alford, described the junior and intermediate sections in particular as “a tremendous show of bulls with good conformation, locomotion, power and size with good fronts and plenty of breed character.”

Purchasing the Supreme Champion, Goldies Olympia, were Messrs Jenkinson, Penrith, Cumbria for their pedigree Whinfellpark Herd. By the 40,000gns Ampertaine Foreman and out of Goldies Fragrance, this June 2018-born embryo calf sold with a Beef Value of LM+52 and was described by the judge as having “tremendous width of plate, very good length and fantastic conformation.” The dam, Goldies Fragrance, is by Wilodge Vantastic and out of Goldies Vitality – described by breeder Bruce Goldie as the “key to the herd” not only breeding well but also producing sons that go on and breed well for their new owners. Goldies Fragrance had previously bred the 25,000gns Goldies Neymar at Carlisle in May 2019.

The Goldies team of 6 bulls bulls grossed £102,585 to level out at an impressive £17,097 per head. Having stood in three classes 1st-3rd, 1st, and 1st-2nd no Goldies bull was beaten by bulls from another herd. Backing up his judgement when describing his Reserve Champion as “a very good bull with power, width and very good second thigh,” judge Michael Alford purchased Goldies Owain for 30,000gns.

WD Wright & Son, Hunthills, Parkgate, Dumfries paid 15,000gns for Pabo Oldspice, a red ticket winner from the last junior class who had previously won the Limousin section in the National Pedigree Calf Show at the 2019 English Winter Fair. Bred by WP Hughes & Sons, Llanbabo, Anglesey he is an AI son of the €10,800 Derrygullinane Kingbull purchased at Roscrea, and out of the Claragh Franco granddaughter Pabo Mared. Another Goldies bull, this time heading to an undisclosed buyer at 14,000gns, was Goldies Oxo (Ampertaine Foreman x Goldies Fragrance).

At 13,000gns was Huntershall Outlaw brought out by Stephen Nixon, Southerfield, Wigton. Having stood second in his class, Outlaw is by the Ampertaine Gigolo son, Claragh Mufasa, and is out of the Loosebeare Fantastic daughter, Huntershall Julietta. New owners are JRD & JA Short, Ouston, Whitfield, Hexham.

It was a good day’s trading for Jim & Andrew Gammie’s 25-cow Westpit herd at Drumforber, Laurencekirk, as they repeated their success from last year’s sale with bulls at 13,000gns, 12,000gns and 7,500gns. Their Reserve Junior Champion, Westpit Oklahoma, sold to Allan Campbell’s Strawfrank Herd at Carstairs Junction, Lanark. One of the most correct bulls in the yard, according to the judge, Oklahoma is by the Swarland Eddie son, Jalex Itsallgood, and out of the Netherhall 007 daughter, Westpit Julie.

At 12,000gns Westpit Orlando was the first prizewinner, another ET-bred calf by Goldies Jackpot and out of Brockhurst Holy, the Wilodge Vantastic daughter when knocked down to Messrs J&W Wilson, Creetown, Newton Stewart. With a successful show record to his name, he had stood Overall Continental Champion at last year’s Stars of the Future, and had also won the best 2018-born bull in the 2019 Scottish Limousin Club Herd Competition judged by Chris Pennie of the Sarkley Herd.

RJ Shennan, Farden Farm, Girvan forked out 11,000gns for Norman Orkney from Norman Farming Co, Little Orton, Carlisle. By Claragh Franco and out of the Ondit-sired Castleview Imitation, he had stood second in his class to the Senior Champion, Braddenbridge Nirvana. At 8,000gns was Norman Oboy, sired by Anside Loki and out of Norman Lola, when selling to R Thornton & Son, Cornhills, Kirkwhelpington. In all, the herd sold 10 bulls to average £5,071.

Going under the hammer for 10,500gns was Garyvaughan Ojack from CV Lewis & Sons, Buttington, Welshpool. By the Guards Boomer son, Foxhillfarm Manhattan, he is out of Garyvaughan Jackie by the £30,000 Garnedd Gower. Ojack had previously won titles at Anglesey & Llanfair Caereinion Shows and was judged best homebred bull in the 2018 NW Midlands & N Wales Limousin Herd Competition. He now heads to C&J Hendry, Keith.

Five bulls in all realised 10,000gns apiece. Steven Wilson, Corby Hill, Carlisle sold Impulsive OMG to JE & E Dobson & Son, White Kirkley Farm, Frosterley, Bishop Auckland for 10,000gns. By the Aghadolgan Emperor son, Loosebeare Justin, and out of the 9,200gns Romford Jessica (by Plumtree Fantastic), he carries a Beef Value of LM+42. At the same figure was Goldies Outlook by Wilodge LJ and out of Goldies Fairytale, another Vitality daughter, who bred Goldies Juggler. RH & DT Swinson, Denstone, Uttoxeter are the new owners.

Heading to Messrs M Dent, Newton Ketton Farm, Brafferton again at 10,000gns is Ampertaine Oblivion (LM+49) from James McKay, Upperlands, Maghera being by Ampertaine Magnum and out of Ampertaine Hotproperty – by Ampertaine Elgin. MacArthur Bros, Mid Fleenas, Nairn paid 10,000gns for Arradfoot Ozymandius, an embryo calf by Wilodge Joskins and out of Guards Janelle, being brought out by Arradfoot & Newland Pedigree Livestock, Ulverston. The final bull at 10,000gns was Millgate Ohboy from Michael Loughran, Dunamore, Cookstown. Selling to Messrs Dick & Sons for their Ronick prefix at Mains of Throsk, Stirling, he is by the Jacot grandson Norman Ely and out of the Millgate Fame-sired dam, Millgate Ignite, having won the penultimate junior class.

Over the past fortnight, at the Carlisle & Stirling Sales combined, 149 Limousin bulls have gone under the hammer to largely commercial buyers whose confidence in the breed to produce easy calving progeny with length, muscle and growth has underpinned this recent solid trade.