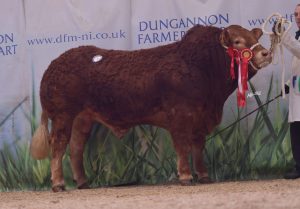 Top of the line all day for Judge Charles Beverland was a March 2018 born bull Rahoney Obadiah, bred by H & D McFarland, Trillick, Co Tyrone. Out of their home bred bull Rahoney Lanech which is a Moloskey Ger son. Being tapped out as Senior Champion , Overall Male Champion and finally Overall Supreme Champion. The partnership between Judge and Bull didn’t stop there, it carried on into the sales ring were Mr Beverland bought Obadiah for 5,600gns to join his Nugent Herd in Portaferry, Co Down. 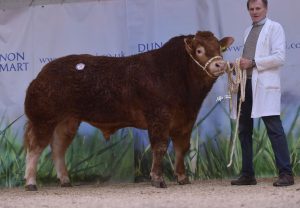 Top price of 5,800gns was Aghadolgan Outlander bred by Mr Raymond Savage, Drumahoe, Co. Londonderry, Sired by Wilodge Joskins and out of his home bred cow Aghadolgan Igloss which is a Sympa daughter.  Outlander was purchased by McCabe Bros, Downpatrick, Co Down. 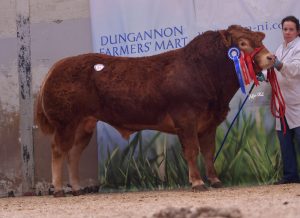 At 5,200gns was Millgate Optimus bred by Michael Loughran, Dunamore, Co Tyrone.  At the pre-sale show earlier in the day he was Reserve Overall Male Champion and Junior Male Champion.  This November 2018 born bull is by Loosebeare Fantastic and out of the home bred dam Millgate Gemma, a Norman Ely daughter.  Optimus was purchased by Will Hopes, Ballywalter, Co Down. 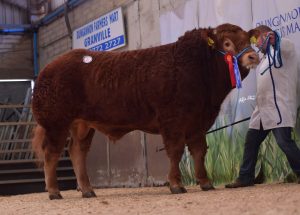 Also selling for 3,800gns was Carmorn Otwo bred by C & F McAuley, Toomebridge, Co Antrim. This September 2018 born bull was by Ampertaine Abracadabra and out of the dam Carmorn Gucci, a Carmorn Copilot daughter. Selling to B McCammon , Larne, Co Antrim. 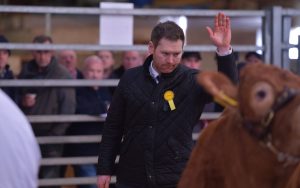 What a day for H Savage & Sons, Newry, Co Down picking up the double by getting Champion & Reserve Champion Female and also achieving the top four female prices. 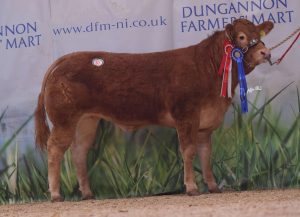 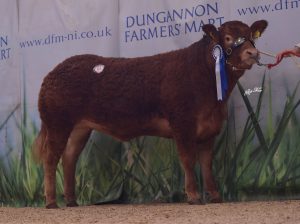 Following hot on her heels at 5,600gns was Trueman Orianthi also November 2018 born. Out of Craigatoke Jack and dam Trueman Honey which is a Wilodge Vantastic daughter. In the pre-sale show this heifer stood Reserve Female Champion. Purchased by WM Donaghy, Ballymena, Co Antrim. 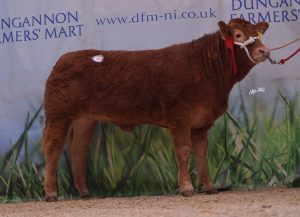 The N.I. Limousin Cattle Club would like to thank the auctioneers at Dungannon Farmers Market, Purchasers, Exhibitors and lastly Judge Charles Beverland, Portaferry.

The next big date for The N.I. Limousin Cattle Club is ‘The Rising Stars’ a show for 2019 born Pedigree Limousin animals and Pedigree Limousin sired Commercials. This will be held on Saturday 14 of March at The Dungannon Farmers Market. Judge on the day will be Mr Andrew Gammie, Aberdeenshire, Scotland of the Westpit Herd.