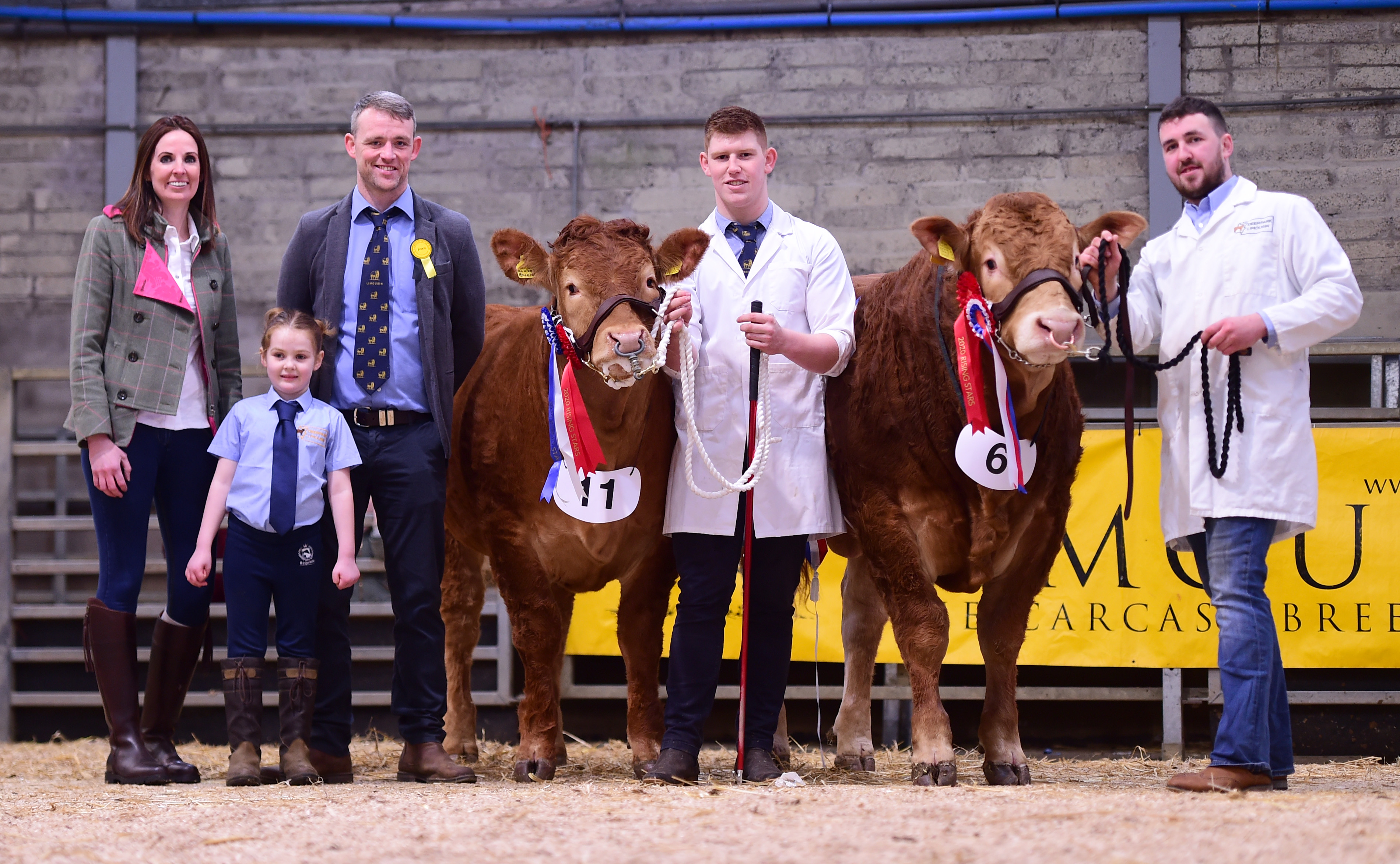 As part of its 40th Anniversary celebrations, the Northern Ireland Limousin Cattle Club in partnership with the NI Young Limousin Breeders held their Rising Stars Show in Dungannon Farmers Mart on Saturday 14th March 2020 attracting a strong entry of 57 animals.

Entries were open to all pedigree and Limousin-sired commercials born in 2019. Classes were split into a senior, junior, pedigree and commercial section, with the pedigree and commercial going head-to-head for the supreme championship. The man in the middle of the ring choosing his placing was Andrew Gammie of the noted Westpit Herd, Aberdeenshire who had success recently in the show ring at the Scottish ‘Stars of the Future’ Calf show claiming the Senior Male Champion, Senior Champion and Interbreed Senior Champion with Westpit Orlando who then went on to fetch 12,000gns at the recent February sale in Carlisle. The herd have also been successful in the sales ring with Westpit Landlord selling for 17,000gns, Westpit McGregor 15,000gns, Westpit Nevada 14,000gns and Westpit Nashville 13,000gns.

Supreme Champion, Pedigree Champion and Junior champion went to a super stylish young homebred heifer Bernish PrincessJuli, exhibited by Kieran McCrory, Sixmilecorss. This young heifer oozed quality and show ring presence and backed with a very successful Pedigree, being sired by the 50,000 gns Wilodge Cerberus and out of a homebred dam Bernish JuliFortune who goes back to the noted Goldies Vitality. The future is bright for this young star.

Reserve Pedigree Champion and Senior Champion was awarded to Deerpark Pluto exhibited by brothers Connor & Ryan Mulholland. This March 2019-born bull was sired by Plumtree Fantastic out of the foundation female Ampertaine Isadora. Reserve Senior Champion was the January 2019-born Foxhillfarm Priceless exhibited by Nugent Estate and Farm having purchased this heifer at the 2019 Weaned Calf sale in Carlisle. Priceless is sired by Objat and out of the 125,000gns Glenrock Illusion.

Reserve Junior Champion was Birchwood Polly, this is the first time the McGurk Family attended the calf show with their Trueman Jagger sired heifer and out of Grenville Frances by the noted Wilodge Vantatsic.

Reserve Commercial Champion went to the JCB Team again with their Trueman Idol-sired heifer, Tobasco. No stranger to the show circuit, this March 2019-born heifer was shown successfully throughout the summer of 2019 attaining the reserve commercial champion at the NI Limousin Championships at Antrim show and then going on to be the calf champion at Agri Expo in Carlisle.