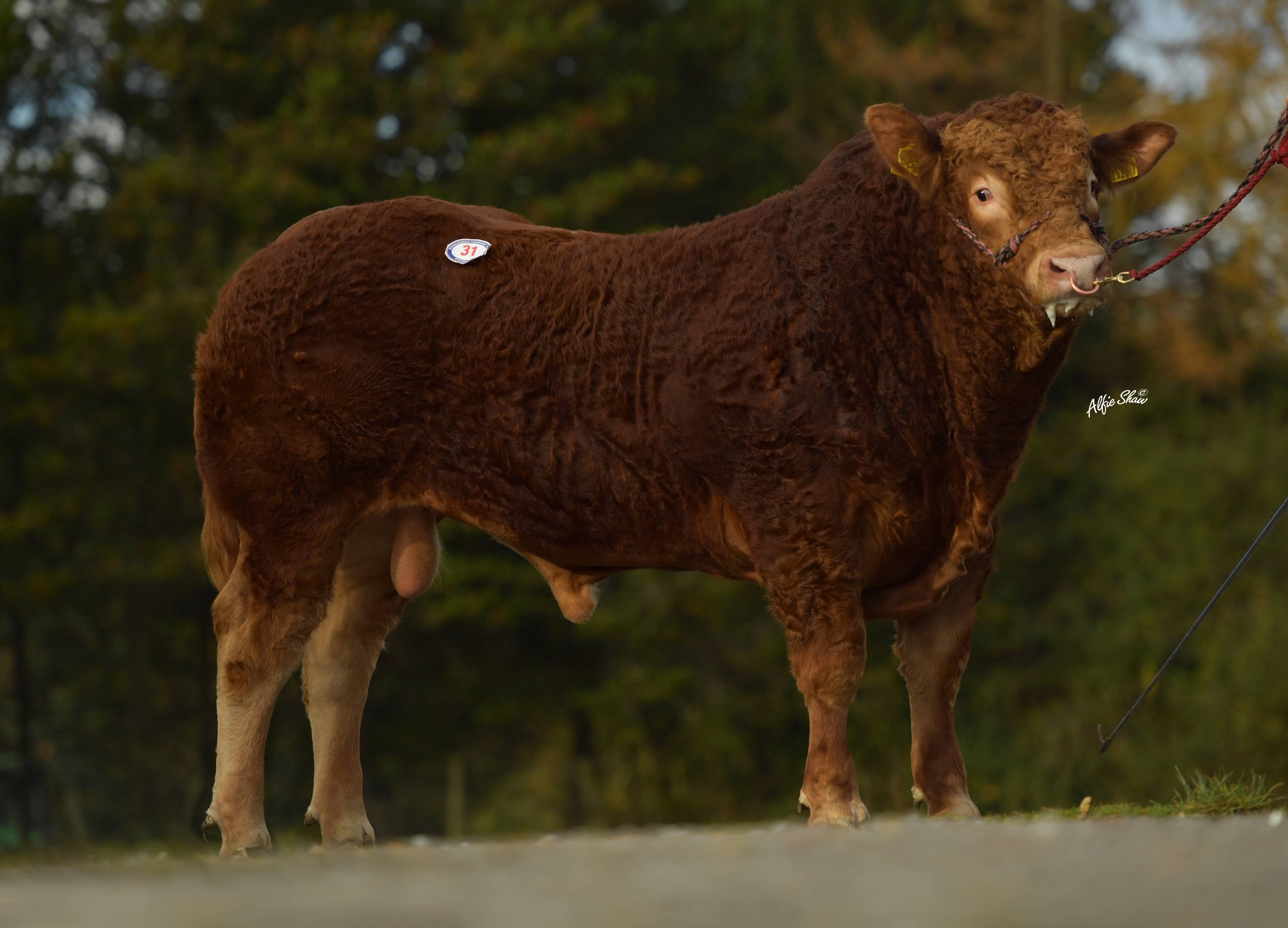 There was solid demand from commercial producers for Limousin bulls at the British Limousin Cattle Society’s autumn sale held at Dungannon Mart on Friday 30 October with some of the top prices also reflecting the interest from pedigree breeders.

Leading the way in the sale ring and taking the top price at 7,200gns was Gleneagle Pascal bred by John O’Kane & Sons, Garvagh.  This May 2019-born bull is by Plumtree Fantastic and out of the dam Ampertaine Marjorie who features Ampertaine Gigolo on the sire side with Ampertaine Abracadabra on the female line. Described by the breeder as a very modern bull with top-performing and easy calving bloodlines, Pascal was purchased by Jim Quail, Banbridge for his Lynderg pedigree herd. Jim stated it may be a coincidence but Gleneagle Pascal goes back to the heifer Lynderg Debora which was sold to Ampertaine over 30 years ago!

The day did not end there for John O’Kane & Sons as they went on to receive the second top price of 6,000gns. Gleneagle Pride was a June 2019 bull by Sympa and out of the dam Ampertaine Ikea (by Ampertaine Forman). He caught the eye of Donal McIlwaine, Antrim.

At 5,400gns Ballyrobin PJ  bred by Joan Gilliland, Antrim, achieved the third highest price. An April 2019 born bull, PJ is by Whinfellpark Lomu and out of the homebred dam Ballyrobin Jaggermeister.   He was purchased by an undisclosed buyer.

Top priced female at 3,600gns was the May 2019-born maiden heifer Millgate Pringles bred by Michael Loughran, Cookstown.  Fully homebred, she is by the Millgate Fame son, Millgate Jack, and out of Millgate Icing who carries breeding by Attirant and Wilodge Vantastic. Pringles was purchased by Geoffrey Rodgers, Dromore.

Selling for 2,650gns was Ashmara Nigella from GN Martin, Dromore.  September 2017-born, she was sold carrying a calf by the 14,000gns Goldies Northstar. Nigella is by Plumtree Fantastic and out of the Irish-bred dam Roundhill Kmelodie 1595. This female was purchased by Mervyn Millar, Rasharkin.

Rahoney Olwyn sold for 2,400gns and is in calf to Moloskey Ger. This September 2018 in-calf heifer is by the bull Plumtree Fantastic and out of the homebred dam Rahoney Hazel. Also being purchased by Mervyn Millar, Rasharkin.

The British Limousin Cattle Society & Northern Ireland Limousin Cattle Club would like to thank the staff at Dungannon Farmers Mart, Parklands Veterinary Group as well as all Vendors and Purchasers.