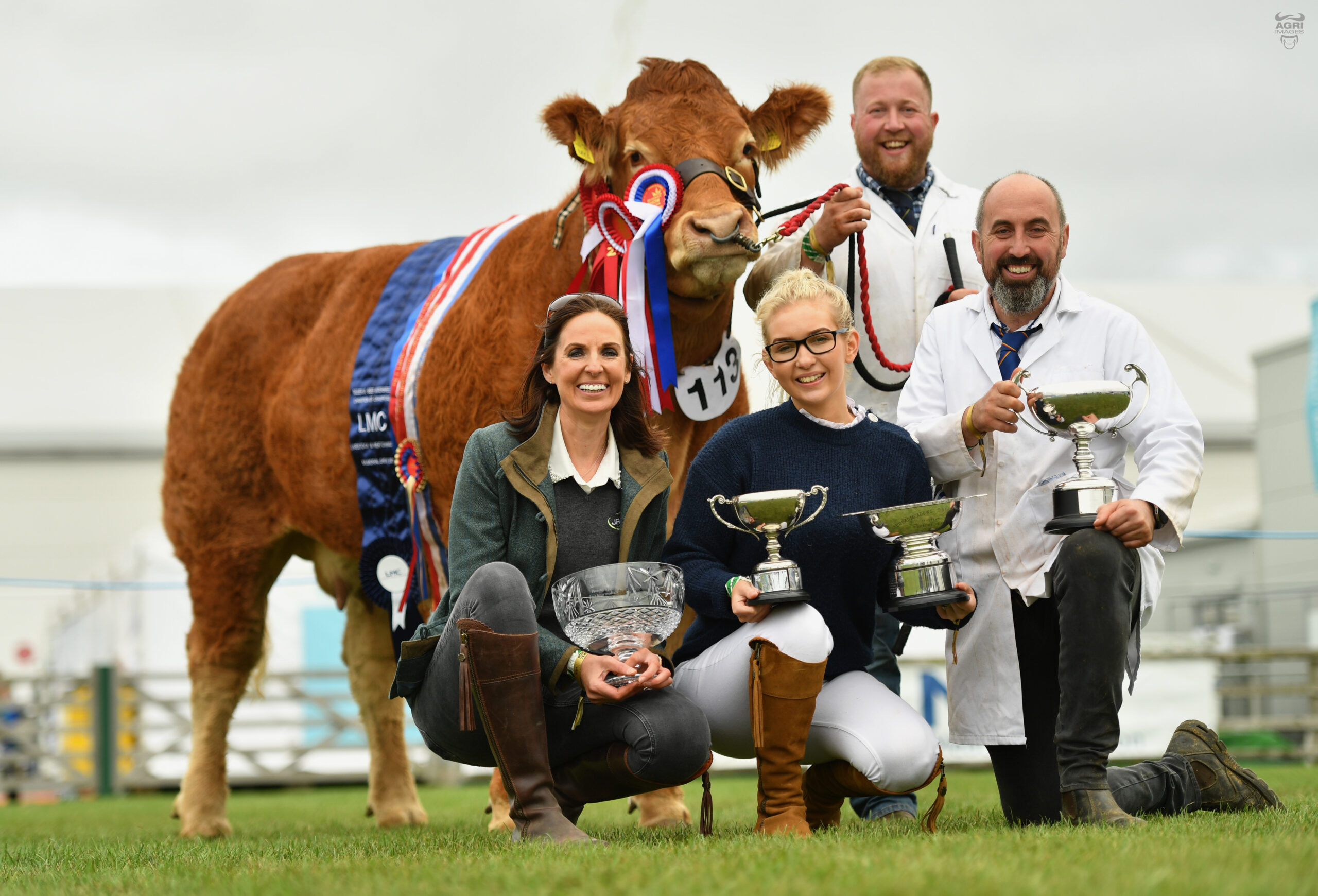 The show must go on… a moto never more appropriate than for the 2021 Balmoral Show.

Usually held in May, it is one of the first summer shows. However, this year the show was moved due to Covid and judging of the Limousin classes was held on Wednesday 22nd September, the first day of Autumn. Breeders from across Ireland celebrated the shows comeback with excellent class entries.

The sun was shining down on judge Sarah Priestley from the Brontemoor herd, who made the long journey from across the water in Kirkcambeck, Brampton, Cumbria. Intense competition was seen across the classes, but stealing the show was overall Limousin champion, Jalex Mya. Bred and exhibited by James Alexander, Jalex Livestock, Randalstown, Co. Antrim, Mya who won her class – Cow born before December 2017, then took the champion female title to make her way to overall champion. She is a January 2016-born daughter of Bassingfield Hobama, whose pedigree goes back to Sarkley Ellajen and out of Norman Indulgent, a Claragh Franco daughter, who was purchased by the herd in 2016. Mya exhibits an impressive beef value of LM37, placing her top 25% of the breed. This Cow and Calf unit went on to secure the title of Reserve Interbreed of 2021.

Hot on her heels taking reserve championship title was Tweeddale Redhot, an April 2020-born heifer, exhibited by Trevor Shields of the Glenmarshal herd, Newry, Co Down. Redhot was purchased in May this year, from the Society female sale at Carlisle from breeder Jonathan Watson, Berwick upon Tweed, Northumberland. She is sired by Carrickmore Maximus, who was National Limousin Champion at Tullamore in 2018 – the youngest ever winner of this title. He went on to be sold for a record price in Roscrea later that year, purchased for 38,000 euros. Her Dam is Grahams Lizzie and Redhot displays a myostatin status of F94L/Q204X and a beef value of LM42, placing her in the top 10% of the breed. Tweeddale Redhot topped the Heifer Born on or after 1st April 2020 class before being tapped out reserve female champion before and then going on to be awarded the reserve overall Limousin champion spot.

Reserve Junior Female was Ballyrickard Rose bred by Ian Davidson & Son, Larne. This May 2020 born heifer sired by Gleneagle Icon and of the dam Ballyrickard Gertie who is a daughter of Milbrook Vic. She has a beef value of LM39 and carries myostatin genes F94L/Q204X. Ballyrickard Rose was awarded Champion Female in the Beef Performance Category judged by Mr Paul Rainey of the Claragh Herd during Friday’s Special Championships.

Leading the male section was Glenlimo Ronaldo, a May 2020-born bull bred and exhibited by Martin McConville, Rathfriland, Co Down. Sired by Plumtree Fantastic, Ronaldo is out of Bridgeview Jazz who was one of the Glenlimo foundation cows. Ronaldo displays a myostatin status of F94L/Q204X and a beef value of LM38, placing him in the top 25% of the breed. Winning his class Bull born after April 2020, he then went on to take the male championship.

Reserve to Ronaldo was Haltcliffe Nijinsky, exhibited by the Crawford Brothers, Rathekeeland herd, Maguiresbridge, Co Fermanagh and bred by Haltcliffe Limousin, Wigton, Cumbria. This February 2017-born bull is a son of 32,000gns Ampertaine Elgin and bred out of Haltcliffe Jezabelle. Nijinsky boasts two of the F94L myostatin gene and a beef value of LM35. After winning his class – Bull born before 1st July 2018 he then went on to win reserve male championship title.