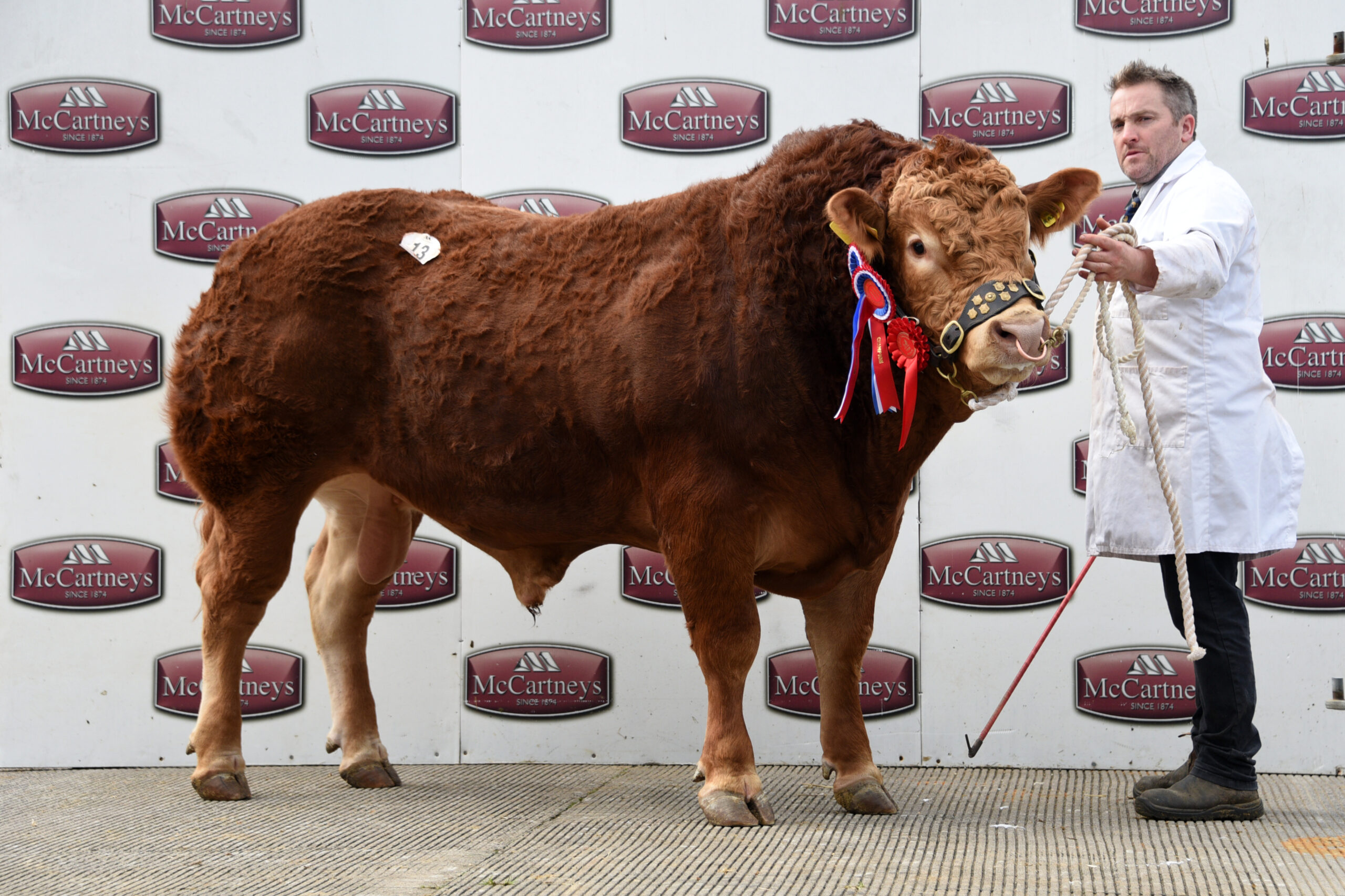 On Saturday 13th November, crowds herded to Brecon Livestock Market from the Welsh borders and beyond to the British Limousin Cattle Society Autumn Show and Sale. The bulls sold had a strong average of £4,410, an increase of £1207.50 on the same sale in 2019. It was brilliant to see an increase of entries in the sales female section which was met with keen demand and an average of £2,135.00, up £90.00 on the same sale in 2019.

Topping the trade at 6,800gns was Ashledge Radar, who was crowned senior and overall champion of the day. Brought forward from the Kirton Family who are based in Bewdley, Worcestershire, Radar is a March-2020 born son of their stock sire Haltcliffe Iceman and out of the homebred cow, Ashledge Herbal. Radar carries two copies of the F94L myostatin gene and a beef value of LM47, placing him in the top 10% of the breed.

Judging the show was Mr David Jordan, who made the 300 mile journey south, from his Longhirst herd based in Morpeth, Northumberland commented “I placed Radar champion as he was a tight, well balanced bull with a well-shaped back end, this met with great type, power and volume, placing Radar as very deserving champion.” Emily Jones of the Maescoedmore herd in Lampeter had this bull on her radar, purchasing him for 6,800gns. Regular supporters of the Brecon based sale, are Peter and Michael and Rob Kirton who run the Ashledge herd commented “We are over the moon to take both Overall and Reserve Overall champion titles with the two bulls we brought forward, Radar and Ramsgate. It is great to have results that support the hard work and breeding that go into our herd. We would like to thank the underbidders and wish both purchasers every success with them.”

Next in the trade at 4,800gns was Nealford Rangeover, brought forward from J H Neale and sons, Launceston, Cornwall. Rangerover was placed second in his class and is a May-2020 born son of the 17,000gns Loosebeare Nelson, who was purchased by the herd from Carlisle in May 2018 and of the homebred cow, Nealford Englishrose, who had a successful show career. Rangerover carries two copies of the F94L myostatin gene and a beef value of LM46. Rangerover was purchased by J and T Raw.

Hot on their heels at 4,200gns was Killerton Rolo, winner of his junior class and travelled from Exeter with Mr and Mrs PW and S M Greed. Rolo is a May-2020 born son of Goldies Jeff who was purchased by the herd in May 2015 and out of Killerton Mylover. Rolo carries myostatin of F94L and Q204X and the highest beef value in the catalogue, LM50 which places him in the top 1 percent of the breed. G E and M J Powell thought Rolo was a sweet choice, taking him to their commercial herd based in Penybont, Radnorshire.

Next at 4,000gns was another bull from the Cornwall based Neale Brothers. Nealford Roy is the first son of Goldies Ohboy to be offered for sale and is out of the homebred cow, Linda. May-2020 born Roy carries two copies of the F94L gene and carries a beef value of LM48. Now calling Haverfordwest home, he travels to the coast with R G Jones and Sons.

Also achieving 4,000gns was Quickeeze Randy from E W Quick and Sons, Crediton, Devon. Randy is a May-2020 born son of Loosebeare Legend and out of Sloughpool Hermione. Randy carries myostatin traits of F94L and NT821. The final bid was placed by Mr Williams, Shobdon, Leominster.

The final bull to be knocked down for 4,000gns was the Overall Reserve champion of the day, Ashledge Ramsgate from the aforementioned A G Kirton. Ramsgate is a May-2020 born son of Ashledge Ontario and out of the homebred cow Ashledge Layla. Ramsgate carries a beef value of LM37 and myostatin of NT821 and F94L. The rosette winner, Ramsgate attracted the attention of W L Jerman and Sons, Brilley who take the short trip over the border to Herefordshire.

A larger entry of females was seen at the sale, which were met with great demand. Leading the section at 3,000gns was Beulah Rhianna from Messrs M J and J M Price, Llanafan Fawr, Builth Wells. Rhianna was placed first in the unhaltered female class and is a June-2020 born daughter of Carnew Millreef and out of homebred cow Beulah Fifi. Mr and Mrs Jordon commented “Rhianna was a bonny heifer with real character, width and power.”  Rhianna hit all the right notes for the judge, Mr David Jordon, who placed the final bid after keen interest, taking her North to Morpeth to the Longhirst herd.

Also at 3,000gns was Deri Nutella and her bull calf at foot, Deri Saracen was brought forward by Mr and Mrs T B Griffiths, Llangain, Carmarthen. The April-2017 born Nutella is sired by the French bull, Georges Y and out of Deri Hotchocolate who has a French dominated pedigree. Nutella was sold PD’d in calf to Deri Poirot. The bull calf sold at foot, Saracen is a July-2021 calf sired by Omnibus. Nutella and her bull calf was a sweet choice, for Richard Jenkins, who placed the final bid.

Going under the hammer for 2,200gns was Beulah Rachael from aforementioned Messrs M J and J M Price, Builth Wells. Rachel is an April-2020 born daughter of 14,500gns Carnew Millreef and is out of the homebred Beulah Hattie. Rachel caught the eye of P J & S Edwards, Maesycoed, Pontypridd to the Gelliwion herd.

Brought forward by D M Howells from Cymmer, Port Talbot was Rhiwllech Rita who went under the hammer for 2,100gns. Rita was placed second in the unhaltered female class and is a February-2020 born daughter of Homebyres Locket out of the homebred cow, Rhiwllech Molly. Rita caught the attention of B P M Thomas, now calling Llangadog, Camarthenshire home.