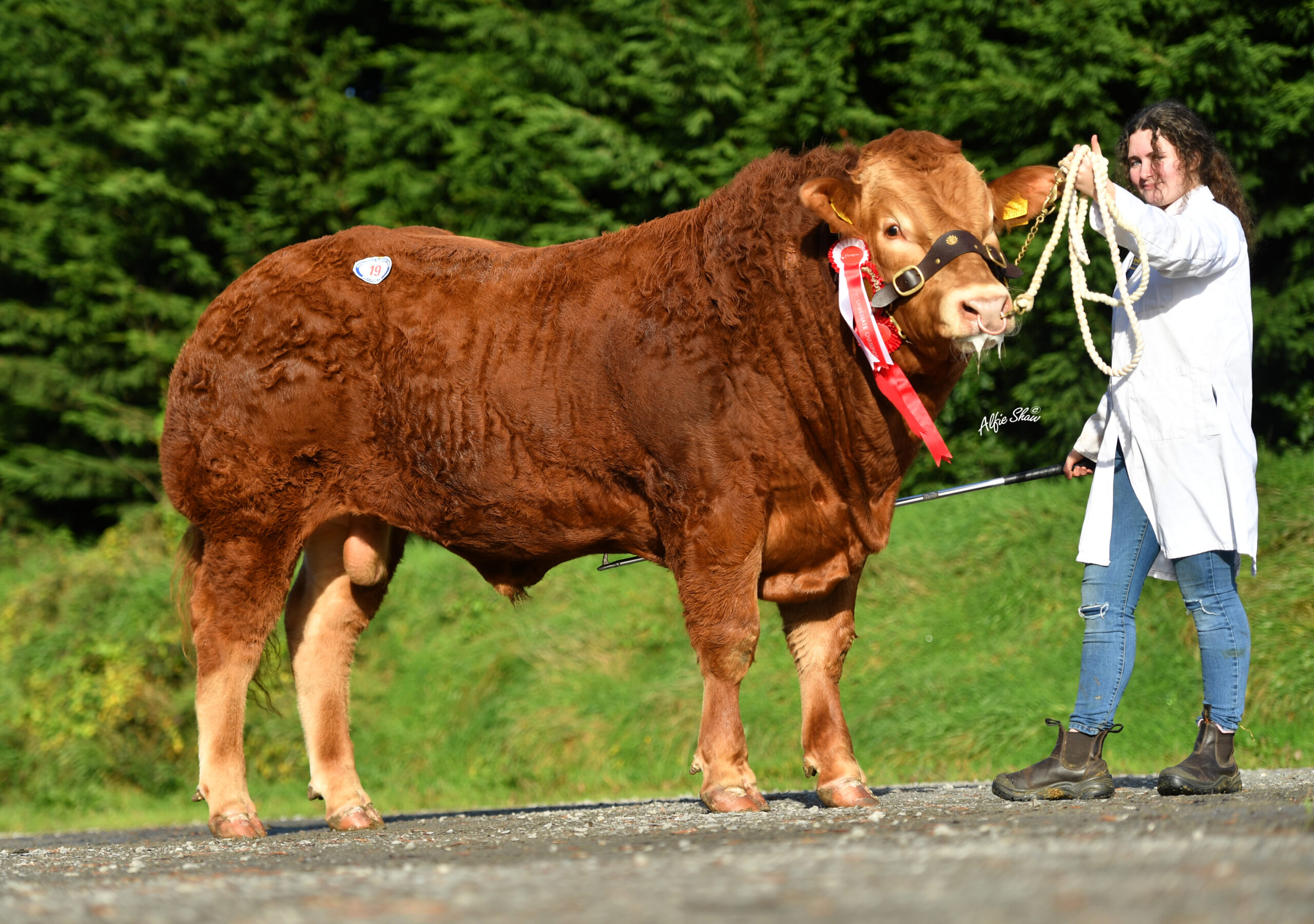 On Friday 29th October 2021, both established breeders and fresh faces headed to Dungannon Farmers Mart, for the Northern Irish Limousin Club Autumn sale of bulls and females. Across the bulls, an average of £3,069.50 was seen, up £189.50 on the previous sale, with a clearance rate of 81 percent. In the female section, an average of £2,528 was seen, with a sound clearance of 93 percent. A large thank you would like to be extended to Kevin McGrane of the Tivenceree herd for judging the pre sale show, and also to Norbrook Laboratories for sponsoring the event.

Northern Ireland Club Chairman, Finbar O’Brien commented “Trade for bulls and females continues to prove the Limousin breed as the go to breed for the commercial and pedigree buyer alike.  I am delighted with continued competitive interest as demonstrated by keen online and in person bidding. Our breeders yet again have proved the worth of their skills.  I am indebted to our main sponsor on the day Norbrook Laboratories for their continued support.  Each class winner receiving vouchers for Closamectin product.  Our Judge Mr Kevin MaGrane tapped out champion male achieving top price on the day.”

Topping the trade at 6,600gns was Intermediate and Overall Champion of the day, Carrickaldreen Rodeo, brought forward by Mr P Murphy, Newry, Co Armagh. The April 2020-born Rodeo is sired by Mereside Lorenzo, who has a French dominated pedigree and is out of the homebred cow Carrickaldreen Jellybean, a daughter of the 38,000gns Ampertaine Foreman. Rodeo carries the myostatin traits of F94L and NT821 as well as a beef value of LM42, placing him in the top 10 percent of the breed. Rodeo caught the eye of the Matthews Bros of the Briarfields herd, taking him home to Glenarm, Co Antrim.

Taking the silver spot at 5,200gns was Reserve Intermediate Champion Slieve Raphael, brought forward from Messrs J I and S J McGeehan, Fivemiletown, Co Tyrone. Raphael is May 2020-born and sired by Mereside Lorenzo. Out of the homebred cow, Slieve Isabella. Raphael carries myostatin of F94L/NT821 and a beef value of LM40, placing him in the top 10 percent of the breed. Raphael now calls Saintfield, Co Antrim home with Mrs M Rutherford.

The hammer fell at 4,200gns for Reserve Junior Champion Gleneagle Razor from J O’Kane and Sons, Coleraine, Co Derry. Razor is a June 2020-born son of renowned AI sire Plumtree Fantastic and is out of Ampertaine Ikea, a daughter of the 38,000gns Ampertaine Forman who was purchased by the herd in 2015. Razor carries two copies of the F94L myostatin trait and was knocked down to Mark Gillespie, Killylea, Co. Armagh.

Hitting the 4,000gns mark was Senior Champion Millgate Reflection, brought forward by Mr M Loughran, Cookstown, Co Tyrone. Reflection is a March 2020-born son of Larkhill Nuludo and is out of the homebred cow Millgate Identical, both of which have French dominated pedigree’s. Reflection carries two copies of the NT821 myostatin gene and has an impressive beef value of LM49, placing him in the top one percent of the breed. Reflection shone bright to RM Sterritt who takes him home to Newry, Co Down.

Hot on their heels at 3,700gns is Moneydarragh Ranger, from S and A Goron, Annalong, Newry. The April 2020-born Ranger is sired by Ampertaine Foreman and out of Chinauley Grace, a daughter of the renowned AI sire and 42,000gns Wilodge Vantastic. Ranger carries myostatin of F94L and Q204X. Ranger caught the attention of Wesley Armstrong who takes him home to Enniskillen, Co Fermanagh.

Going under the hammer for 3,600gns was another lot from J O’Kane and Sons, Coleraine, Co Derry. The August 2020-born Gleneagle Randy is a son of Gleneagle Oddessey and is out of the homebred cow Geneagle North, a daughter of the 45,000gns Ampertaine Jamboree. Randy carries two copies of the F94L myostatin gene and sold to Kieran Fegan, Rathfriland, Co Down.

Deerpark Ronaldo was up next achieving 3,500gns. Offered for sale from C and R Mulholland, Craigavon, Co Armagh, the February 2020-born Ronaldo is sired by Ronick Gains and is out of Bernish Icequeen, a daughter of the 38,000gns Ampertaine Foreman. Ronaldo carries two copies of the F94L myostatin gene and a beef value of LM39. Scoring the final bid was Brian Hall who takes him home to Newtonabbey, Co Antrim.

3,400gns was secured for Reserve Senior Champion Fedneyhouse Percy who was brought forward by Pattons Limousins of the Carrickananny herd, Newry, Co Down. Percy is a May 2019-born bull sired by Scorboro Regius and is out of Fedneyhouse Lizzie. Percy carries two copies of the F94L myostatin gene and caught the eye of Edward McKee, Downpatrick, Co Down.

The hammer fell at 3,200gns for Boleyn Ronaldo from Michael Savage, Ballnahinch, Co Down. The May 2020-born is sired by Ampertaine Elgin, a son of the 24,000gns Glenrock Ventura. Out of Ampertaine Mable, a maternal sister to Ampertaine Fifi, dam of the 45,000gns Ampertaine Jamboree. Ronaldo carries two copies of F94L and has a beef value of LM31. Scoring the final bid for Ronaldo was B Quayle, Downpatrick, Co Down.

Ballyrickard Rodney went under the hammer for 3,000gns, brought forward by I N Davidson, Larne, Co Antrim. Rodney is a May 2020-born Claragh Franco sired bull, out of Greenwell Emeila, who has a French dominated pedigree. Rodney carries F94L and NT821 myostatin traits and a beef value of LM48.  Rodney was purchased by Peter McNally, Cookstown, Co. Tyrone.

Onto the female section and the first of two heifers to score 3,500gns was Blackwater Rizzo after being crowned Overall Champion female, from K and S Williamson, Benburb, Co Tyrone. The April 2020-born heifer Rizzo is sired by Ampertaine Magnum and is out of Homebyres Neema. Rizzo carries two copies of the F94L myostatin gene and caught the eye of Alan Geary, Keady, Co. Armagh.

Going under the hammer for 3,500gns was Carnew Rosie   from J and J Aiken, Dromore, Co Down. The May 2020-born heifer was placed second in her class and is sired by Mereside Godolphin and is out of homebred cow Carnew Naomi. Rosie bloomed for Samuel Murphy taking her to Waringstown, Co Armagh.

Hot on their heels at 3,400gns was Reserve Female Champion Derg Racy from J and S Allen. Racy is a July 2020-born daughter of the 17,000gns Trueman Idol and is out of Liscarn Lana. Racy caught the attention of Bryan Paul who takes her home to Upperlands, Co Derry.

Newhillfarm Pinky      went under the hammer for 2,800gns, brought forward from M and J McPolin, Newry, Co Down. Pinky is a November 2020-born daughter of Ampertaine Metric and is out of the homebred cow Newhillfarm Mini. Pinky carries myostatin of F94L and Q204X and a beef value of LM37. Eamon Wallace held the final bid, taking her to Dungannon, Co Tyrone.

Carnew Roxy went under the hammer for 2,500gns, brought forward by the aforementioned J and J Aiken. The February 2020-born daughter of Haltcliffe Vermount and is out of the homebred cow, Carnew Emerald. Roxy caught the eye of Stephen Fennan who takes her home to Newcastle, Co. Down.