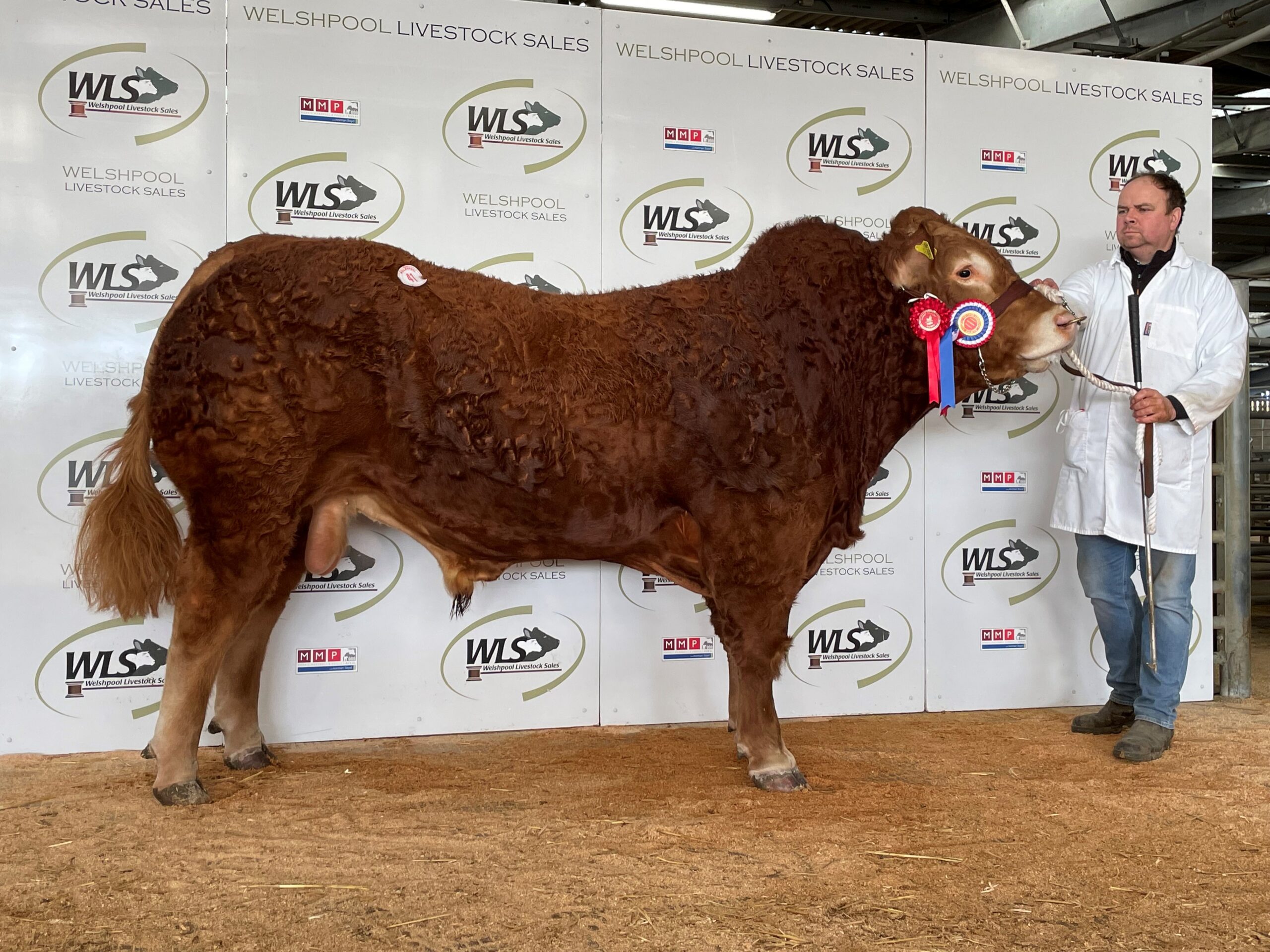 On Thursday 25th November, crowds herded to Welshpool Livestock Market from the Welsh borders and beyond to the North Wales and North West Midlands Club Autumn Show and Sale. The bulls sold had a strong average of £4,076.47, meanwhile, entries in the sales female section were met with keen demand reaching an average of £1,680, topping at 3,500gns.

Leading the sale at 6,200gns was Garyvaughan Poshboy, brought forward by C V Lewis, Buttington, Powys. The November-2019 born son of Plumtree Deus is out of Sarkley Dominica, who has a French dominated pedigree. Poshboy carries two copies of the F94L myostatin gene and the eye of I E Gittings..

Next in the stakes at 5,000gns is from the Ashledge herd brought forward by A G Kirton and Sons, Bewdley, Worcestershire. Ashledge Reagan, the April-2020 born Killcastle Horace son is out of the homebred cow, Ashledge Linford, a daughter of the herds stock bull, Haltcliffe Iceman. Reagan displays a beef value of LM32, and stood out to P J Blackshaw.

Going under the hammer for 5,000gns was Garnedd Robin, who was brought down from Betws-Y-Coed, Conwy with K I and E and H I Jones. Robin is an April-2020 born son of the herds stock bull, Ernevalley Jaguar and is out of the homebred cow Garnedd Maeres. Robin carries two copies of the F94L myostatin gene and was taken home by J P Jones.

Another bid of 5,000gns was taken for Haulfryn Rock, exhibited by R G and R S Whitley, Buckley, Clwyd. The April-2020 born son of the French bull Harris and is out of the French cow, Guitare. Rock was a solid choice for B L Hughes.

Hot on their heels at 4,600gns was Ashledge Raymond from the aforementioned Bewdley based Ashledge herd. The March-2020 born Haltcliffe Iceman son is out of the homebred cow, Ashledge Isabella. Raymond has a beef value of LM34 and was the top choice for J C Hutchinson.

Knocked down at 4,600gns was Pabo Rico, travelling from Rhosgoch, Angelsey with W P Hughes and Son. Rico is a July-2020 born embryo calf sired by Netherhall Jackpot and is out of the homebred consistent breeder, Pabo Icemaiden. Rico carries myostatin of F94L and Q204X and a beef value of LM42, placing him in the top 10 percent of the breed. Rico was snapped up by Messrs Evans.

Sarkley Rocco went under the hammer for 4,200gns, brought forward by E H Pennie and Son, Montgomery, Powys. The May-2020 born son of Ampertaine Majestic is out of the homebred cow, Sarkley Irondelle, a daughter of Haltcliffe Doctor. Rocco carries myostatin of F94L and NT821 as well as a beef value of LM43. Rocco was a solid choice for E H Hughes.

In the female section the trade was topped at 3,500gns with an outfit from Chris White, Moreton-in-Marsh, Gloucestershire. The October-2018 born cow Calogale Optimum, bred by G J Lee and C M Lloyd, Kidwelly, Carmarthenshire is a daughter of Trueman Jagger and is out of Trueman Florence. Optimum carries myostatin of F94L and Q204X as well as a beef value of LM41 and was sold in calf to Mereside Lorenzo. Frogmore Savannah, her April born heifer calf at foot is a daughter of Whinfellpark Lomu. This promising outfit heads home with D W and L Jones.

Top price heifer Temeside Rupee was knocked down at 1,850gns brought forward by V A S and T V S Corbett, Knighton. Rupee is a July-2020 born heifer sired by the French bull, Sablier and out of the homebred cow, Temeside Himalaya. Rupee carries myostatin of F94L and NT821. Rupee was purchased by J A Wood and sons.