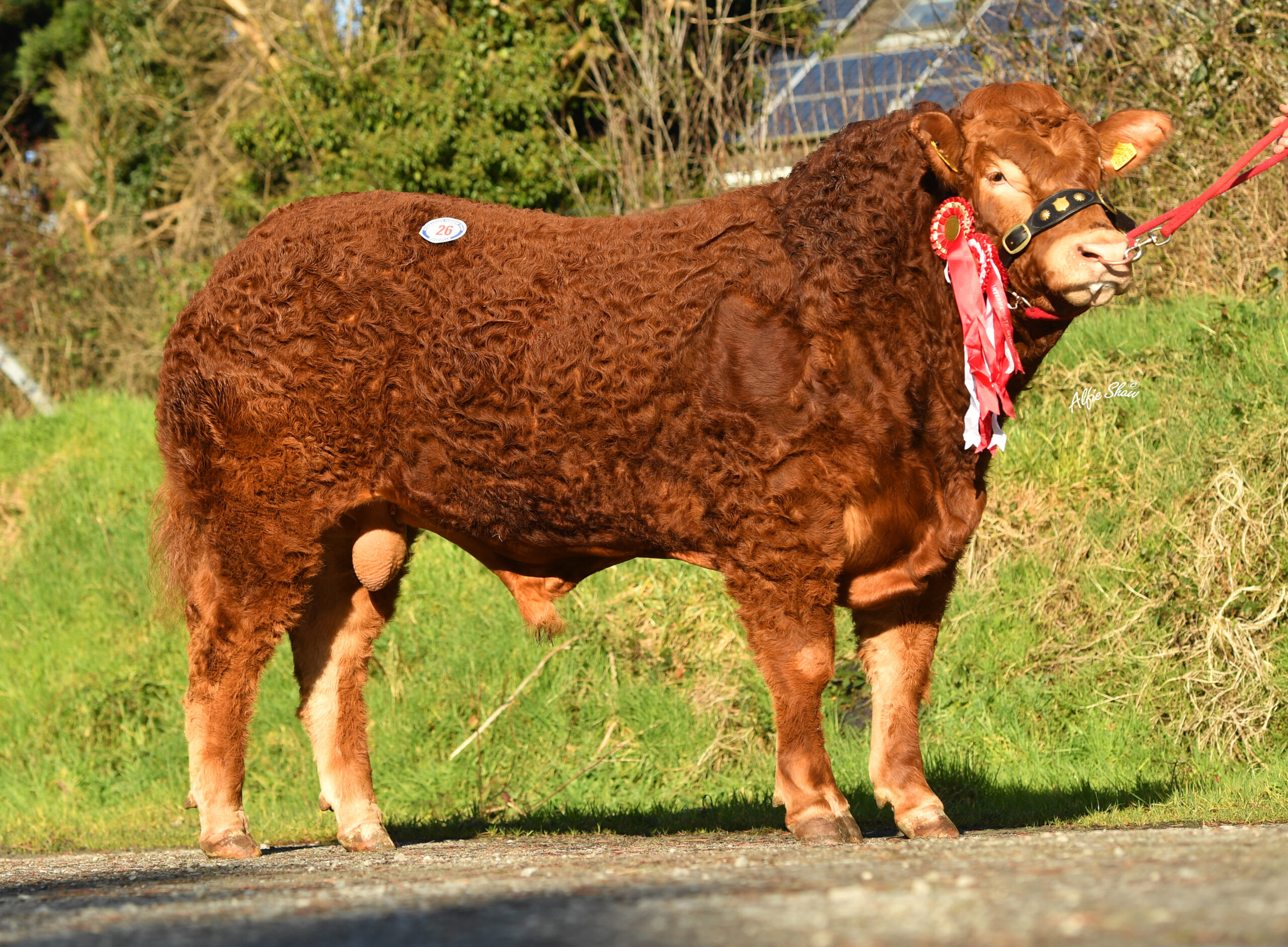 Buyers travelled from all over Northern Ireland on Valentine’s Day to choose their favourite at the British Limousin Cattle Society’s February show and sale in Dungannon Farmers Market.  From the 37 bulls forward a clearance rate of 84% was achieved and an average of £3,600, up slightly on the February 2021 sale.

Setting a record price at Dungannon for a pedigree Limousin bull was 10,600gns overall champion Ballyrobin Redbull, brought forward by Joan Gilliland, Antrim, Co Antrim.  This July 2020-born bull has a myostatin of F94L/Q204X and a beef value of LM34.  Sired by Gunnerfleet Lion, Redbull is one of his first son’s offered for sale in Northern Ireland.   Redbull’s dam Ballyrobin Frascati is a Wilodge Vantastic daughter.

Displaying great style and correctness, Redbull grabbed the attention of the judge Karol Connell from Oldcastle, Co Meath at the pre-sale show.    The judge commented “Redbull was a tremendous bull on the day.  He has a super head, top line and back end and is truly an outstanding pedigree type bull”.  Redbull was awarded intermediate champion, male champion and overall champion by the judge.  Redbull heads home with limousin breeder Richard Mowbray of the Droit herd to Newtownstewart, Co Tyrone.

The second highest price of 6,600gns was given for Pointhouse Ronaldo homebred by Michael and Kile Diamond, Garvagh, Co Derry.  September 2020 born Ronaldo is sired by Loosebeare Fantastic and out of Pointhouse Hazel, a Wilodge Cerberus daughter.  Ronaldo boasts two sets of the F94L myostatin gene and a beef value of LM45.  He was tapped down to Stephen Hayes, Dungannon, Co Tyrone.

Next up was Newhillfarm Ryan, a September 2020 born bull fetching 6,000gns.  Bred by M & J McPolin, Newry, Co Down, Ryan is a Haltcliffe Dancer son and out of Newhillfarm Michelle, a Kaprico Eravelle daughter.  Ryan displays two sets of the F94L myostatin gene and a beef value of LM46, putting him in the top 10% of the breed.  This bull was purchased by Desmond Fulton, Ballymoney, Co Antrim.

Victor and Stephen Keys, Dromore, Co Down brought forward Ashview Rodger, the Junior Champion who sold for 5,100gns.  A September 2020-born bull sired by Plumtree Fantastic and out of the dam Together Ibell, a Swarland Eddie daughter, Rodger has two sets of the F94L myostatin and a beef value of LM36.  He goes home with S & F McGuckin to Upperlands, Co Londonderry.

Senior champion Pointhouse Rebel home bred by Michael & Kile Diamond, Garvagh, Co Derry achieved 4,400gns. Born May 2020 Rebel is sired by Loosebeare Fantastic and out of the dam Pointhouse Jewel.  Jewel bred Pointhouse Paul who sold for 42,000gns in Carlisle in February 2021.  Rebel has a myostatin of F94L/Q204X and a beef value of LM23.  He was purchased by Rosemary Neill, Downpatrick, Co Down.

Eniver Real, Reserve Senior Champion sold for 3,800gns and is home bred by Michael McKeefry, Garvagh, Co Derry.  Born May 2020, Real is sired by the 70,000gns Ampertaine Magnum and out of the dam Eniver Lulu, an Ampertaine Gigolo daughter.   He was purchased by Nigel Condy, Dungannon, Co Tyrone.

Top priced female and selling for 2,550gns was Killydunn Rosie from Quinn Brothers, Kilrea, Co Derry.  A July 2020 born heifer Rosie is sired by Plumtree Fantastic and out of the dam Goldies Lollypop.  She was snapped up by Eamon Wallace, Dungannon, Co Tyrone.