Home Homepage Headlines Commercial buyers out in force at Stirling 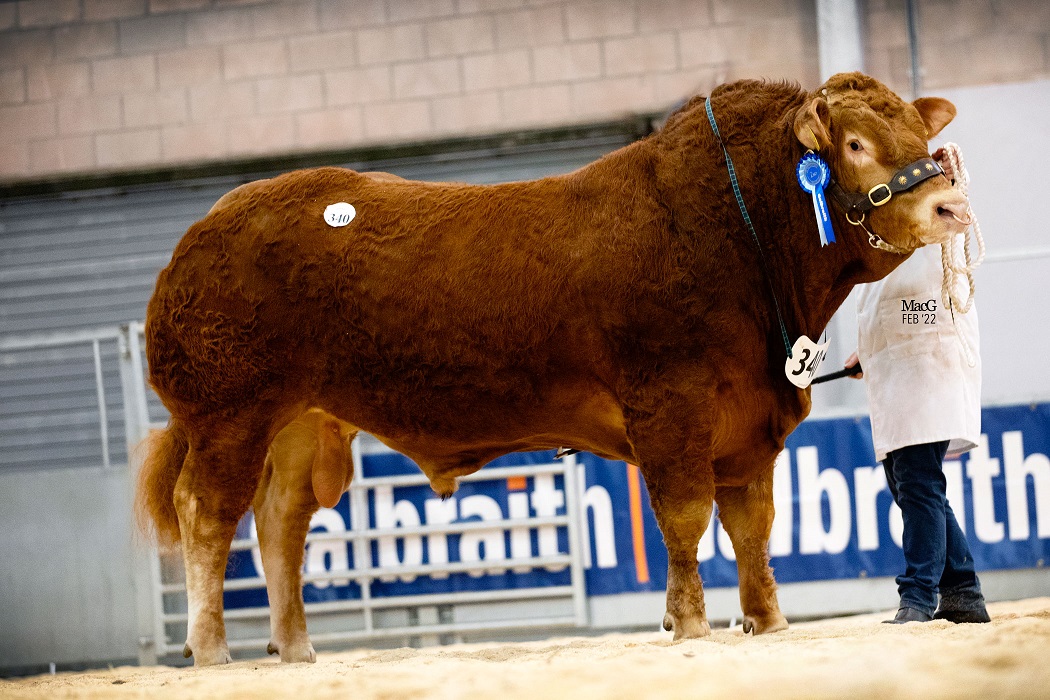 Will Ketley, Breed Secretary reported that he was extremely pleased with the standard of Limousin bulls, which was quite possibly the best show of Limousins seen in Stirling for a long time. The Bulls met a good commercial following of buyers securing bulls ready for Spring. With this in mind, an extremely strong clearance rate and average was achieved by the vendors.

Murray Rainie, auctioneer “A high quality show of bulls offered by breeders met a keen interest from start to finish, resulting in a clearance rate in excess of 90%. In particular bulls with good locomotion and length proved to be very much sought after, so easily sold to a ringside dominated by commercial producers from across Scotland and England”.

Judge for the day John Mason of the Oddacres pedigree Limousin herd from Skipton, commented that he was very pleased to be asked to judge the show, which was to a high standard with many worthy prize winners amongst every class.

Taking center stage and topping the trade was Burnbank Rockstar, the first of three bulls brought forward by D and L Graham, Mains of Burnbank Farm, Stirling, selling for 14,000gns. The April 2020-born Rockstar is sired by Redpaths Nobleman and out of the homebred Burnbank Izzy. With double F94L myostatin and a Beef Value of LM45 placing him in the top 10% of the breed, it’s no surprise he caught the eye of Huntlyhill Farms, Huntlyhill Mains, Lanark.

Senior champion and overall male champion Elrick Roosevelt bred by Mr M Massie, Mains of Elrick, Aberdeenshire sold for 10,000gns. April 2020-born, Roosevelt is an Elrick Jethro son, out of the homebred dam Elrick Gagrielle, demonstrating an impressive back pedigree. Jethro was senior champion at Carlisle in February 2016.  Gagrielle has bred three full brothers to Roosevelt selling for an average of £6,000.  Roosevelt is out of the two strongest cow families in the herd and stood out from his time as a very young calf.  Roosevelt carries F94L/Q204X myostatin and a Beef Value of LM49, just shy of being in the top 1% of the breed. Commercial buyers R and J Temple, Wyliehole Farm, Dumfries snapped him up.

Messrs MacGregor, Dyke Farm, Glasgow, sold the May 2020-born Dyke Robroy for 9,000gns, the first of five bulls put forward by the herd. Robroy is out of the homebred cow Dyke Mull and sired by Goldies Lordoftherings, who was purchased by the herd in Stirling February 2017 for 12,000gns. Placing second in class three, he has double F94L myostatin and a Beef Value of LM44, placing him in the top 10% of the breed. Full brother Dyke Pacman sold for 8,200gns in Stirling October 2020. Grandam Dyke Iona has also bred bulls to £14,000. Robroy goes home to Matthew Jack, Carriston, Fife.

It was time for Goldies Rolex to enter the ring, bred by Bruce Goldie, Townsfoot, Dumfries, he sold for 8,500gns. Sired by the renowned 45,000gns Ampertaine Jamboree and out of homebred cow Goldies Fragrance. The April 2020-born, Rolex flaunts F94L/Q204X myostatin and a Beef Value of LM42, placing him in the top 10% of the breed. Full brother Goldies Neymar sold for 25,000gns at Carlisle May 2019. Rolex is one of two bulls purchased by Wester Kinloch Farm, by Blairgowrie, Perth.

Top price for the Ronick herd, was the April 2020-born Ronick Ralph selling for 8,000gns and presented by R Dick, Mains of Throsk Farm, Stirling. Ralph has F94L/Q204X myostatin and a Beef Value of LM43, placing him in the top 10% of the breed. Sired by the aforementioned Ampertaine Jamboree who was bought by the herd in 2015, Ralph is out of the homebred cow Ronick Marriet. He has gone home to N A M and S Trotter, Houselaw Farm, Roxburghshire.

Junior champion Goldies Rambler sold for 8,000gns, offered for sale by the Goldies herd. Son of the homebred bull Goldies Nimble and out of Goldies Dame, whose daughter Goldies Gaynor sold for 9,000gns in 2012. Rambler who was born in June 2020, has double F94L myostatin and a Beef Value of LM41, placing him in the top 10% of the breed, with super EBV’S no wonder he got the attention of R and A Stodart Ltd, Mill of Inverarity, near Forfar.

The first of two bulls to reach 7,000gns was Dyke Romeo from Messrs MacGregor. This April 2020-born son of Goldies Lordoftherings, is out of the homebred cow Dyke Beatrice. He displays the double F94L profit gene and has a Beef Value of LM31. Romeo won the hearts of Drydale Farms and now resides in Drydale, Orkney.

Also achieving 7,000gns was the intermediate champion and reserve overall champion Harestone Randysandy, brought forward by Neil Barclay, South Road, Aberdeenshire. Randysandy is out of the homebred cow Harestone Layla and sired by Goldies Novelty, purchased by the herd for 16,000gns in February 2019. May 2020-born, with an impressive Beef Value of LM49, placing him in the top 10% of the breed and double F94L myostatin, he was swept up by R Easson and Son, Barns of Airle, Tayside.

A trio of bulls sold for 6,800gns, the first being Dyke Rambo presented by Messrs MacGregor. This April-2020 born bull has double F94L myostatin and a Beef Value of LM44, placing him in the top 10% of the breed.  Sired by the legendary Goldies Lordoftherings and out of the homebred cow Dyke Flora, this bull has impressive EBV’s. Rambo goes home to J S Fleming, Gaisland, Glasgow.

Next up was the 6,800gns May 2020-born Stephick Rodeo bred by Stephanie Dick, Westerton of Cowie, Stirling. He is out of the homebred Stephick Mambo and sired by Wilodge Granville who sold for 7,000gns October 2012. With F94L/Q204X myostatin and an admirable Beef Value of LM49, Rodeo was purchased along with five other bulls by the Scottish Government Bull Stud, Inverness.

Again reaching 6,800gns was the embryo calf Goldies Rascal offered for sale by the Goldies herd. Out of the homebred dam Goldies Jo and sired by Ampertaine Magnum, who sold for 70,000gns in October 2017. The July 2020-born, Rascal has double F94L myostatin and a Beef Value of LM41, placing him in the top 10% of the breed. Now calling Inverurie home, he goes onto commercial buyer Monymusk Farms.

The reserve intermediate champion Maraiscote Rkid sold for 6,500gns, brought forward by Mr J Nimmo, Bogside Farm, North Lanarkshire. The May 2020-born, Rkid is sired by Rutland Jetset and out of the homebred Maraiscote Nifty. He boasts double F94L myostatin and a Beef Value of LM33.  After catching the eye of W R Raeside, he goes to work in Linnhead Farm, Glasgow.

Newhouse Romulous was next to reach 6,500gns, from Messrs Adam and Son, Newhouse of Glamis, Angus. This black coated, July 2020-born bull has F94L/NT821 myostatin and a Beef Value of LM47, placing him in the top 10% of the breed. Sired by Westhall Jammy and out of homebred dam Newhouse Impulse, Romulous goes onto to reside with J Hyslop and Sons, Netheton Farm, Lanarkshire.