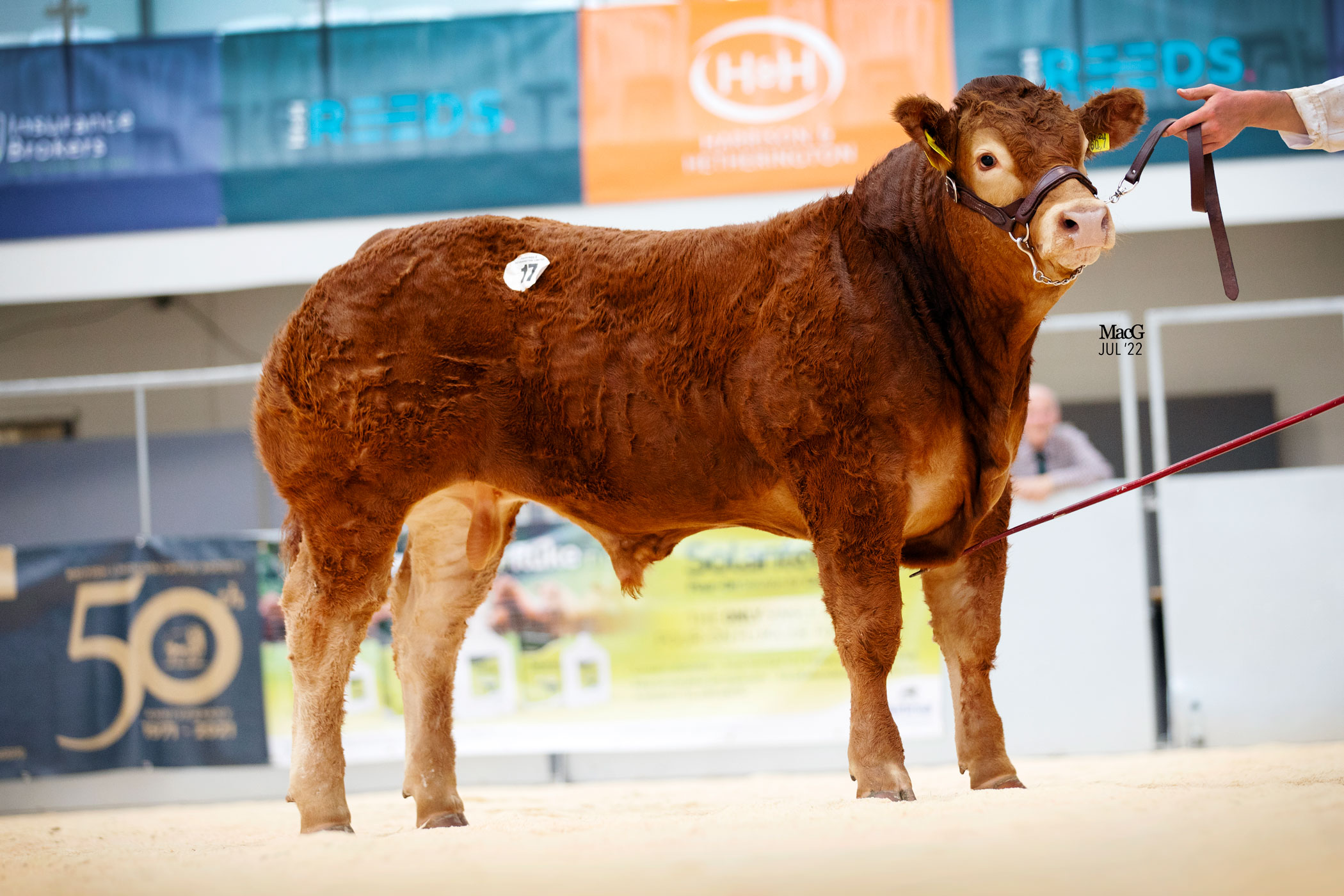 During three days of celebration of its 50th Anniversary, the British Limousin Cattle Society held a special Anniversary Sale at Borderway Mart on Friday 29th July.  Fourteen pre-selected lots passed successfully under the hammer.  In front of a packed sale ring, they represented the very best of modern and some classic bloodlines.

Prior to the start of the sale, the late David Tomlinson was remembered for his outstanding contribution to livestock auctioneering.  Following an opening tribute by H&H Group Director Dawn Harrison, a plaque was unveiled re-naming the main sale ring as ‘Ring 3 The David Thomlinson Ring’.

Michael Scott, Chairman of the H&H Group said “We decided to make this official during the Limousin Club’s 50th anniversary celebrations, as David was a notable pedigree Limousin breeder and had been involved with the society since its inception, being a former Chairman of the North West Limousin Cattle Breeders Association.”

Craig Ridley, Honorary President of the British Limousin Cattle Society concluded: “David was an integral part of our Society and is greatly missed by everyone. He was an inspiration to many and was always happy to help and support in any way he could. It is a great honour to be involved in celebrating his life in this way and is a very fitting way to open our 50th anniversary celebrations at Borderway”

Leading the day’s trading at 26,000gns was the November 21-born bull calf Jalex Superb from renowned Northern Ireland producer James Alexander.   Drawing strong interest before the sale, Superb is by the noted Derrygullinane Kingbull and out of Jalex Missy,  a homebred cow bred by Bassingfield Hobama and Trueman Isabella, full sister to the well-known Trueman Idol.   Bidding was strong with the final nod going to Mr G Cameron, Acharrade, Argyll.

Next to hit the highlights at 22,000gns was Trueman Serenata, an April 21-born heifer from Messrs H Savage and Sons, also from Northern Ireland.  By the herd’s stock bull Telfers Munster, Serenata won the Best Heifer Calf in the NI Herd Competition in 2021, as did her dam – Trueman Layla – in 2015. With a Myostatin genotype of F94L/Q204X, she has a Retail Value in the Top 1% of the breed, and heads to the home of Mr A J Ewing, Dumbretton, Annan, Dumfriesshire.

Up next was the February 21-born bull Huntershall Sancho, sold by Mr S J Nixon, Huntershall, Wigton.  Bidding climbed swiftly to 18,000gns with the sale successfully bagged by Messrs W Richardson & Son, Ghyll House, Appleby for their well-known pedigree Mystyle herd.  By the noted shapey sire Gunnerfleet Hicks and out of Allanfauld Jolene, a cow that has bred so successfully for the herd, Sancho has a Myostatin genotype of F94L/Q204X.

Two animals followed hot on the heels of this at 16,000gns.  First of those through the ring was Cowin Supreme from WD Dyfan and Carol James from Carmarthen.   This powerful bull was born January 2021, by the famous Ampertaine Foreman and has a Myostatin genotype of F94L/F94L.   He is out of the homebred cow Cowin India, who has scopey bloodlines going back to Loosebeare Fantastic and Objat, this reflected in his Top 10% growth EBVs.   He was sold to Mr G Hughes, Middleton St George, Darlington.

Second in the ring at 16,000gns was heifer Charlottes Sapphire, a further consignment from Northern Ireland for sale from Miss C Martin, Dromore, County Down.  Born April 2021 and with Myostatin genotype of F94L/Q204X, this heifer is no stranger to many having lifted the Junior Female Limousin, Overall Junior Limousin and Junior Interbreed crowns at the RUAS Balmoral Show earlier this year.  By Elite Forever Brill and out of an Irish dam Roundhill Kmelodie1595, the heifer heads to Ireland and the home of the noted Ardnacrusha pedigree herd of Donal Maloney, County Clare.

Two consignments from BLCS President Craig Ridley of the Haltcliffe herd rounded off the seven of eleven lots that sold for more than five figures on the day.  First in the ring was Haltcliffe Rachel, an August 2020 heifer with Myostatin genotype of F94L/Nt821.  She is by Aultside Meanmachine and out of the homebred Haltcliffe Madison, a pedigree littered with sales in excess of 40,000gns on both sides.   The first animal in the ring, she kicked the sale off in fine style selling for 15,000gns to Sr J Nachón, from Villaviciosa in Spain.

Second in the ring from Craig Ridley was the October 2020-born Haltcliffe Ruth who sold for 10,000gns.  Bred a bit differently to her stablemate and with a Myostatin genotype of F94L/Q204X, she is by the herd’s stock bull Westpit Omaha, whose early progeny sales have been highly successful, and who was later to be seen in the Anniversary National Show.  Her dam is Haltcliffe Maybe who goes back to the herd’s famous French sire Sympa.  Keen bidding resulted in the final tap going to Mr T Shields for his Glenmarshal pedigree herd in Newry, Northern Ireland.

Rounding off the sale were two lots of embryos offered for sale.  The first were a pair consigned by EH Pennie and Son of the Sarkley pedigree herd, Montgomery, Powys.  These were out of Sarkley Glorianne by Ampertaine Elgin, therefore bred the same way as the recent world-record breaker Graiggoch Rambo who sold for 180,000gns.  These sold for 7,000gns for the pair to M Cormack, Meadow View, Stoke Prior, Leominster.

Also selling to M Cormack in an exciting day’s trading was the second and final pair of embryos consigned by Messrs Jenkinson, Whinfellpark pedigree herd, Penrith.  These are bred out of a different record-breaker this time – the 250,000gns Wilodge Poshspice – and sired by Goldies Orinocco and sold for 6,000gns 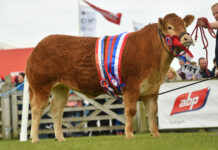 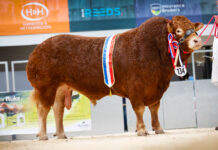 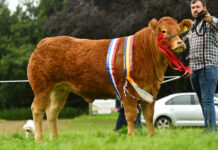 DEERPARK SAFFRON TAKES HOME THE SILVERWARE AT THE LIMOUSIN CHAMPIONSHIP 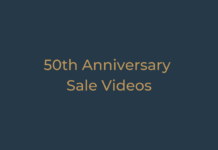 FIVE DECADES OF GENETICS TO THE FORE AT LIMOUSIN SOCIETY’S 50TH...