In a major honour for the UK’s pedigree beef industry, Aled Edwards, from Home Farm, Cilycwm, Llandovery has become the first British breeder to be elected as World Limousin President.  He was unanimously elected by delegates, representing over 20 international Limousinassociations, at the 18th International Limousin Council AGM held recently in the conference centre of the Bank of Florence, Tuscany.  Mr. Edwards becomes only the third World Limousin President in the 35 year history of the International Limousin Council and takes over from Beppe Pantaleoni, Piacenza, Italy who stood down from the position he had held since 1998.

In 2007, Mr. Edwards was elected European Limousin President and is a former Chairman of the British Limousin Cattle Society, a position he held for four years.

The International Limousin Council was established in France in 1973 to develop and promote the Limousin breed world wide and in his opening address, Mr. Edwards told delegates that the Council’s founding principles must continue to be pursued: “The focus will be to work together to embrace and utilize the most modern breed improvement  technologies and provide Limousin breeders in established cattle populations, and in developing markets, with the genetic tools and resources that are both practical and profitable to beef cattle producers.”

“The dynamics of the world beef market are changing and the breed is well placed to meet the opportunities and challenges ahead.  Ongoing research and evaluation clearly shows the advantages of the Limousin in calving ease, feed conversion, meat yield and killing out percentage.  Efficiency, performance and the delivery of a profitable carcase will continue to grow the breed worldwide.”

Over thirty countries are affiliated to the International Limousin Council with the breed now represented in some seventy countries worldwide.  The UK is the only major cattle population where Limousin is officially the leading numerical breed.

Commenting on Aled Edwards’ election, British Limousin Cattle Society Chairman Jim Bloom said, “This is a great, and well deserved, personal honour for Aled and I think it also shows the standing of the British Limousin breed in the eyes of the internationalLimousincommunity. As a practical, hands-on farmer, Aled’s focus on the needs of the commercial market place will continue to advance the ILC and the breed at a world level.” 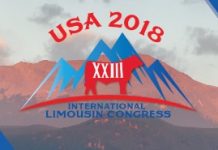 Don’t forget to Register for the ILC 2012 in Denmark

Registration for the ILC in Denmark 2012 begins