A good turnout of Young Limousin Breeders competed in the Annual Stockjudging held this year at the Great Yorkshire Show on Wednesday 14th July 2010. The weather stayed fine for the afternoon as the competitors, who represented six of the Society’s nine regions, surveyed two classes of stock made up of one young bull class and one heifer class, giving their reasons for the class of bulls. Master Judge was James Callion who runs the Melbreak Herd of Pedigree Limousins from Shaneragh, Dromore, Co Tyrone, Northern Ireland. 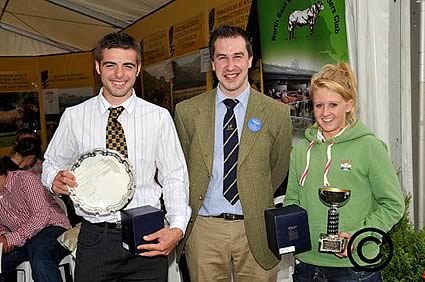 With a prize fund of cash and Limousin Merchandise, this already prestigious event serves as the qualifier for the Anglo-Irish Stockjudging, an annual competition involving teams from England, Scotland, Wales, Northern Ireland and the Republic of Ireland. Up for grabs also was a Trip to Agribition in Canada – due to take place in November 2010 – for the highest placed 17-21 year old.

Following a keenly contested competition, twenty-two year old Matthew Wright of the North West Midlands and North Wales Club took home the overall honours and with it the Douglas Crighton Silver Salver. Matthew works at home on the family farm at Tixall, Stafford and has started his own Limousin herd over the last couple of years, namely Fourcrosses.

In the Team competitions, Matthew teamed up with eighteen year old Harriet Wilson of Haughton, Stafford, to take the senior title. In the junior section the title went to the team made up of Jess Simms and Joe Burnett, also from the North West Midlands & North Wales Club. The Noel Lusby Cup for best Junior was also won by Jess Simms.

Grateful thanks on behalf of all the Young Limousin Breeders goes to the North East Club for their hospitality and providing the Young Breeders with a BBQ after the judging on Wednesday evening, just before the heavens opened. The Young Limousin Breeders Club would also like to thank all those who gave their support and made the event a success, particularly those bringing out stock to be judged, the Master Judge and Stewards.