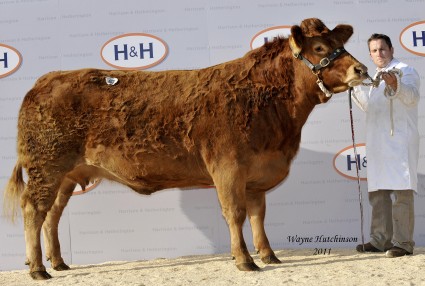 The British Limousin Cattle Society’s Breeders’ Sale held on Friday 14th October 2011 at Carlisle prior to the Autumn Bull Sale saw a very solid trade which grossed £159,516 and was headed by a top price of 8,100gns for Baileys Countess. Bred by Mr T Bailey, Co Meath, Ireland the 2007 born Baileys Countess was consigned by Mr M Phillips, Broadoak, Low Braithwaite, Ivegill,Carlisle as part of the Dispersal Sale of his Newmarque prefix. Countess is sired by Ronick Hawk and is out of Marlhill Tess – twice All-Ireland Cow Champion. She heads to the establishing Calogale Herd of GJ Lee & CM Lloyd, Ger-y-Coed, Four Roads, Kidwelly, Carms and, among others, joins purchases from the 2010 Red Ladies Sale (Lourie Dazzle 6,500gns). She was sold AI’d to Bahut having then run with Ironstone Colonel.

Messrs Boyling, Crabwell Farm, Parkgate Road, Mollington,Chester purchased the next two highest priced Newmarque lots for 4,900gns and 2,800gns respectively. Going under the hammer for 4,900gns was the January 2010 born embryo calf Newmarque Florence by Mas Du Clo and out of Milbrook Monique, a Broadmeadows Cannon daughter.Florence is full sister to Milbrook Tanko. At 2,800gns was another embryo calf, the 2007 born second calver Newmarque Celia, sired by Rocky and out of Carthorpe Pansy. She was sold AI’d to Bahut having then run with Ironstone Colonel.

Heading the Major Reduction Sale of the Rombalds Herd on behalf of Mr GC Rowson, Goose Farm, Eastmoor, Sutton On Forest, York was the 7,500gns Rombalds Elsie. June 2009 born and carrying a Beef Value of LM+42, this served heifer is by Sympa and out of the Broadmeadows Cannon daughter Rombalds Annie, and had stood second in her class at the 2011 National Limousin Show. She was sold PD’d in calf to Ionesco to C & N White, Frogmore Farmhouse, Moreton in Marsh, Gloucestershire for their Frogmore Herd. 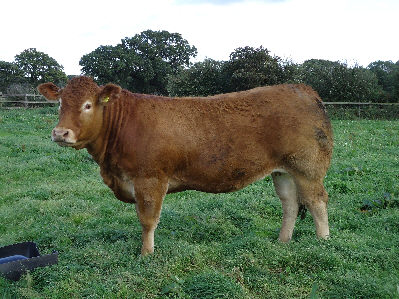 J & H Phillips, Esgairddaugoed, Cwmfelin-Mynach, Whitland,Carmarthen then purchased Rombalds Carmen (LM+31) for their Gronw Herd. A 2007 born second calver, Rombalds Carmen is by Ronick Hawk and out of the Malibu-sired Rombalds Vivienne and was again sold PD’d in calf to Ionesco. She was accompanied by her six-month-old heifer calf at foot, Rombalds Grace, sired by Rainbow Simon.

A Production Sale from the Normande Herd for Cruickshank Normande, Cowford Farm, Cleghorn, Lanark saw 13 heifers served and/or suckling average £3,343. Best of these was the 5,000gns Normande Dana when going under the hammer to the Bizzyberry prefix of JM Moffat, Hillend Farm, Biggar, Lanarkshire. 2008 born, Normande Dana is by the French bull Abel and is out of the Ramier daughter, Normande Ulana, and was sold with her bull calf at foot, Normande Geoff, by Ballykincurra Dinky. With a Beef Value of LM+21 she was sold served to Moloskey Claus. At 4,800gns was Normande Destiny, by Dauphin and out of Normande Tatum, who was sold with a Beef Value of LM+28 to MR Mair, Hill Farm, Cumnock, Ayrshire and again with a sameway bred bull calf at foot and having run with Moloskey Claus.

Leading the Glenturk consignment on behalf of Messrs BG & L Allan, Glenturk, Wigtown, Newton Stewart was the 2,600gns and penultimate sale lot Glenturk Bunny. Bunny is by Grahams Rocksolid and is out of Anside Sunny and was sold with her Tango-sired heifer calf at foot, Glenturk Gina, to Messrs Hughes & Co, Ystrad Fawr, Llangwm, Corwen, Clwyd for their Medrad Herd.

The Sale from the Lagas Herd on behalf of Laga Farms Ltd, Laga, Evie, Orkney realised a top price of 2,400gns for Lagas Daphne when knocked down to WG & D Wilkinson, Tilberthwaite Farm, Coniston, Cumbria. Daphne is an AI daughter of Tunnelby Scallywag and is out of Medrad Unwaith. Having run with Cowin Elitor and subsequently Carntogher Drogba, the 2008 born Daphne was sold with her rising eight-month-old heifer calf at foot, Lagas Gigi, by Carntogher Drogba.