With purchasers from the Republic of Ireland and the UK mainland also in attendance, 24 of 26 females found homes at a very healthy clearance rate of 92%. The demand for quality Limousin females at Ballymena, at what was the first BLCS sale of 2012, continued the strong trade of 2011 which saw over £7 Million of pedigree Limousin stock sold at Official Society sales.  Overall, 24 lots averaged £1,920 up £245 on the year, the top average for females attained at a BLCS sale held in Northern Ireland since May 2009.

The top-priced female, Scotchtown Freda, showed both presence and power in the sale ring and caught the eye of many potential buyers. June 2010 born, this in-calf heifer is sired by the prolific 42,000gns Wilodge Vantastic and is out of the homebred dam, Scotchtown Sally, a Shire Milton daughter. Holding a Beef Value of LM+32, she realised 4,000gns when selling in-calf to the 100,000gns bull Haltcliffe Vermount.  Scotchtown Freda now heads to S Ireland to the Tomriland pedigree herd of Mr N Kenny, Ashtord, Co Wicklow.

Second top price of the day of 3,200gns was also consigned by the Scotchtown Herd, this time in the shape of Scotchtown Fiola. This September 2010 born heifer, who showed great style and width with tremendous plates, is an AI calf sired by the noted Ronick Hawk.  She is out of the homebred dam, Scotchtown Diola, a Homebyres Visitor daughter and carried a Beef Value of LM+26.  Scotchtown Fiola was bought by local pedigree breeder Mr Alan Geary, Darkley Road, Keady, Armagh for his Montagne prefix.

The next leading price of 3,100gns went to the youngest catalogued heifer, and final lot of the day, Castlerock Grace bred and consigned by Miss L Savage, Blakes Road, Articlave, Castlerock.  This March 2011 born heifer is sired by the noted French sire Sympa and is out of the homebred Castlerock Boogie, a daughter of the 23,000gns sire Sarkley Sebastian. New home is the Forge Herd of English breeder Mr Tom Pearson, Hampton Bishop, Hereford.  Mr Pearson also purchased another heifer at the sale, again from a high-health status herd, the 1,900gns Aghadolgan Fern, by Craigatoke Bomber and out of Aghadolgan Vfthree, bred by Mr R Savage, Castlerock. 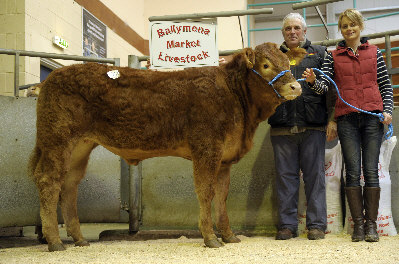 At 2,650gns was Limo Crystal, the final cow to be sold from the Limo Herd, Greenmount College, Abbey Farm, Co Antrim.  This smart, naturally- muscled female fetched 2,650gns when purchased by Mr Ian Elliott, Leighan Road, Monea, Enniskillen who runs the Ianschoice Herd. June 2007 born, Limo Crystal is by Glenrock Ulysses and is out of the Pelletstown Ken daughter, Carmorn Orna. She was sold PD’d in calf to Limo Excel, a Wilodge Vantastic son. The same purchaser then secured the next leading price, Clydevalley Basmin, bred by Mr RS Clyde, Kilmakee Road, Templepatrick, a cow by Nectar and out of Ashmore Jasmin. She was snapped up for 2,150gns with her smart June 2011 born heifer calf at foot, Clydevalley Gasmin, by Sarkley Vacation.