The year started with the AGM held at the Plough Inn, Rhoesmaen, Llandeilo where all the officers were re-elected.

In May the NBA Beef Expo was held in Malvern. The stand was well-manned by Club members who also provided the cattle. There was a new young handlers competition called Young Show Stars Challenge between the breeds whereby a team of three had to prepare and show two cattle and then answer questions about the cattle. They also had to place and give reasons on a pen of four cattle. Our teams of Nia Griffiths, Lowri Davies and Jess Maynard were placed second overall. Rob Coney and Ffion Jones also took part.

Early in July, the on-farm breeders reduction sale held on behalf of the Dinmore Herd of Mr P Dawes saw a top price of 36,000gns for Dinmore Fabulous, a June 2010 born maiden heifer, which was the top priced Limousin female sold in the year.

Mid-July saw Club members attending the Royal Welsh Show where once again the Club was well represented – in one bull class there were twelve animals from the Club. For the second year we had a drinks reception and prize giving on the Monday night which again was a great success.  Congratulations are due to Smiths of Bloxham who won the Supreme Championship and defended their Individual Interbreed title.  A big well done is due to all exhibitors as the breed dominated proceedings and picked up four major interbreed titles.

In August, the Club held its Stars of the Future at Brecon County Show. This was again successful with good support from members despite the appalling weather. We would like to thank all our sponsors and the show for their support. This year’s judge was Mr Richard Lawrence from Market Bosworth who chose as his overall winner Mynach Gwe from the Griffiths Family.

Also in August we held our herd competition, this year’s judge being Mr Meirion Thomas from the Nebo Herd, Conwy, North Wales.

We had a Club visit to the Mynach herd in September where an enjoyable day was had by all who attended despite the rain. We would like to thank the Griffiths Family for allowing us to visit and for their hospitality.

During November we held our annual dinner at the Plough Inn, where we were joined by our judge who gave us the results and some comments about each herd he went to.

The year closed with another trip to Llanelwedd for the Winter Fair. Once again Limousin bred animals were the most numerous and very successful, taking the Overall, Steer & Heifer Championships. 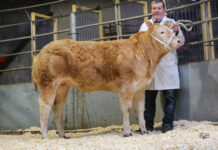