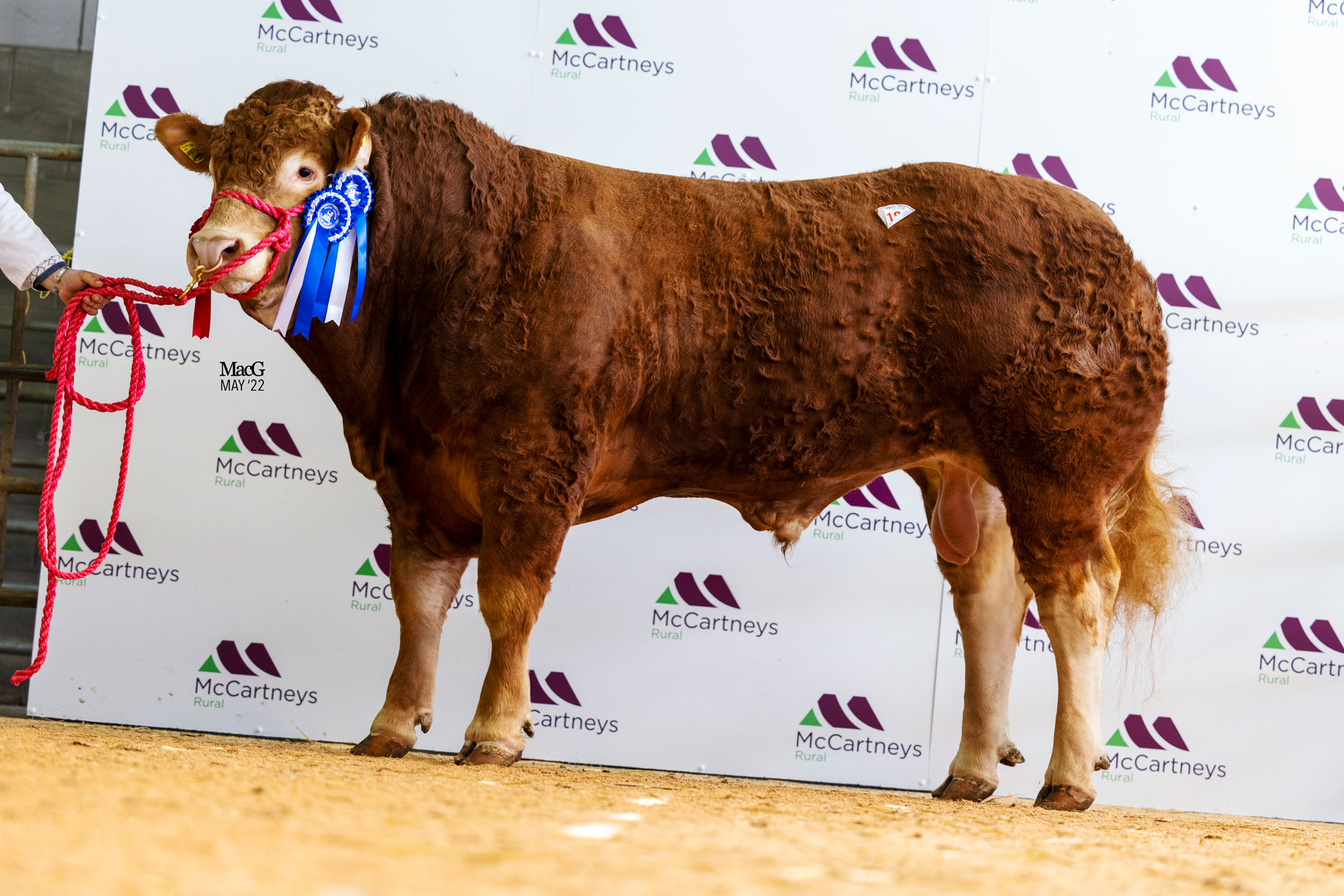 On Saturday the 14th of May 2022, all roads lead to Brecon Livestock Market for the Limousin Society sale. 26 bulls were put forward for sale achieving a clearance rate of 85% and a top price of 17,000gns.

Auctioneer James Amphlett commented “I feel that the overall quality of the bulls at the sale was exceptional, and one off the best shows of bulls in Brecon for some time. Vendors were rewarded with some very strong prices and good overall clearances. Good sale prices and quality stock attracts the attention of new vendors and buyers year on year, continually growing the success of the sale.”

Travelling down for the day was the judge Neil Blenkhorn of the Lowbonnick pedigree herd, Low Bonwick Farm, East Torkshire, who stated “It was my first time in Brecon mart, I was very impressed with the quality and strength in depth of bulls on offer. The prices achieved in the sale reflected the offering of bulls that tick all the boxes for the commercial breeder. There was also a great diversity of quality bulls forward with some of pedigree breeding type, as well as those ideal for commercial show and suckled calf production.”

Smashing all previous pedigree Limousin bull records at this sale centre and selling for 17,000gns, was reserve overall champion Twemlows Rebel presented by W L and J A Forrester, Lodge Farm, Shropshire. This October 2020-born bull is sired by the 17,000gns Ampertaine Jeronimo, who has a strong back pedigree featuring Plumtree Fantastic, Wilodge Vantastic and Cloughhead Umpire. Rebel has an admirable top 1% Beef Value of LM53 and is out of the homebred cow Twemlows Oprah, who is sired by the 10,000gns Swarland Eddie. Rebel goes home to G Greenow and Son of the Blaenau pedigree herd, Blaenau Mawr, Powys.

Messrs E W Quick and Sons, Loosebeare Manor, Devon, had a fantastic day selling three bulls for an average of £7,630. Top price for the herd and placing second in his class was Loosebeare Regal, with the hammer falling on a final bid of 9,000gns. He is sired by the aforementioned Ampertaine Jeronimo and out of the home bred cow Loosebeare Moldy, who goes back to Loosebeare Fantastic. Born in May 2020, Regal has a Beef Value of LM39 and now reigns over Highbridge, going home to C J and J C Durston of the Rushlin pedigree herd, Knoll View Farm.

Consistent supporters of the sale Dyfan and Carol James, Blaencowin, Carmarthenshire, brought forward Cowin Realdeal who placed second in his class and sold for 8,500gns. Born in November 2020, he is sired by the renown Wilodge LJ and is out of the homebred cow Cowin Misscymru. He has a Beef Value of LM49 and was placed second as a young bull in the 2021 herd competition, where the Cowin herd were also awarded the champion extra-large herd for the South Wales and Mid-West Limousin Club. He was the real deal for A Thomas heading home to Llanliggo, Powys.

Next up from Messrs E W Quick and Sons, was Looseabre Robroy who walked out of the ring on a final bid on 6,800gns. This June 2020-born bull, who was placed first in his class, features double F94L myostatin and has a Beef Value of LM41. Robroy is also sired by Ampertaine Jeronimo and out of the homebred cow Loosebeare Jilly, who goes back to Aghadolgan Emperor. Robroy’s full brother was sold at Melton Mowbray April 2022 for 6,000gns. He caught the eye of G and D R Wigley, Rhosdyrnog, Powys.

Following closely behind, another top price for Messrs E W Quick and Sons was the May 2020-born bull Loosebeare Rookie, who placed first in his class and sold for 6,000gns. He is sired by the homebred stock bull Loosebeare Fantastic, who is also a popular AI bull for many pedigree breeders. Rookie, who has a Beef Value of LM42, is out of the homebred cow Loosebeare Gemma, who has bred Loosebeare Ned champion at Brecon in May 2019. A second purchase of the day for A Thomas, Llanliggo, Powys.

Selling at 5,500gns was overall champion for the day Cowin Rebel from Dyfan and Carol James. This December 2020-born bull, who has a Beef Value of LM41, is sired by Mereside Lorenzo and out of the homebred cow Cowin Mai, who goes back to Neatherhall Jackpot. Rebel now calls Gloucester home, going to commercial breeders E L and S M Rees, Box Farm.

The first of three bulls to sell, achieving an average of £4,620, for P W and S M Greed, Columbjohn Farm, Devon, was Killerton Ranger, who sold for 5,000gns. Ranger, who was born in October 2020 and has a Beef Value of LM37, is sired by Foxhillfarm Montreal and out of the homebred cow Killerton Jarre. Ranger now resides in Ceredigion, going home to T G and E A Jones, Blaenwaun.

Purchased by D W L Roberts of the Malthouse pedigree herd, Malthouse Farm, Cardiff, was the senior male champion Killerton Romulus for 4,200gns. This August 2020-born bull was presented by P W and S M Greed. He is sired by the stock bull Garnedd Neptune, which the herd bought in 2019 for 7,000gns. Romulus, who has double F94L myostatin and a Beef Value of LM38, is out of the homebred cow Killerton Octavia.

Three consignments consisting of a total of seven females were presented for sale, achieving a top price of 3,400gns and a clearance of rate 71%.

A G Kirton and Sons, Severn Lodge Farm, Bewdley, presented two heifers for sale, achieving an average of £3,360. The first to sell for 3,400gns was the February 2020-born heifer Ashledge Realm. Realm has double F94L myostatin and a Beef Value of LM43. She is sired by Haltcliffe Iceman and out of the homebred cow Ashledge Herald, who has been a consistent breeder for the herd. Realm was snapped up by Messrs Rhodri and Steffan Evans of the Sarahlou pedigree herd, Home Farm, Fishguard.

Second in the ring for A G Kirton and Sons was female champion Ashledge Rachel, who sold for 3,000gns to W Turner, Walnut Hill Farm, West Midlands. Rachel, a March 2020-born heifer with a Beef Value of LM40, is sired by Haltcliffe Iceman and is out of the home bred cow Ashledge Jessica, who goes back to Ballyrobin Gazza.

The first of three heifers to sell for Dyfan and Carol James was the June 2021-born Cowin Sandy, who sold for 1,800gns. She is sired by the homebred bull Cowin Meister and out of the homebred cow Cowin Ladi, who goes back to Tigris. She has a strong set of EBV figures, with a Beef Value of LM41. Sandy, who won reserve female champion, stole the hearts of J H Davies and Co of the Glyncoed pedigree herd, Glynyrodyn, Llandysul.

Next up for Dyfan and Carol James was Cowin Swynol, who sold for 1,400gns. Born in May 2021, this heifer is sired by the aforementioned Cowin Meister and out of the homebred cow Cowin Mawys, who goes back to Powerful Irish. With a Beef Value of LM40, she heads home to S A and V L Morris of the Twitchen pedigree herd, Moor House, Craven Arms.

Fellow pedigree Limousin breeders S H Fish and Son of the Strandbrook herd, New House, Craven Arms purchased Cowin Saphire, who was presented by Dyfan and Carol James for 1,100gns. Saphire who was born in July 2021 is sired by the popular AI bull Plumtree Fantastic and out of the homebred cow Cowin Perl.