In an outstanding achievement, Milbrook Gingerspice, the January 2011-born in-calf heifer brought out by Mr William Smith, Oldcastle, Co Meath, Southern Ireland was crowned Overall Individual Interbeed Supreme Champion for the second year running at the Royal Ulster Show, Belfast.  The Interbreed title, judged on the second day, followed hard on the heels of the Supreme Limousin Championship title picked up on the opening day of the 2013 Royal Ulster Show held at its new Belfast home on Wednesday 15th May. 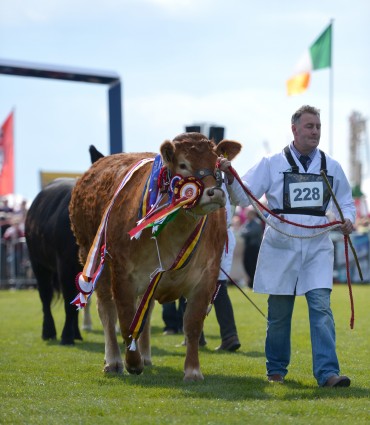 Gingerspice is by the prolific Wilodge Vantastic and is out of Milbrook Baby. In 2012, she had won the Limousin, Junior Interbreed & Overall Individual Interbreed Championships and was presented here in-calf to Brookmill Fearless, a Sympa son, being due in January.

This made it a fantastic three-in-a-row for Mr Smith who two years ago also secured both the Limousin and Interbreed championships with Milbrook Celine. Limousin Judge Stephen Illingworth of the noted Glenrock Herd, Howgillside, Eaglesfield, Lockerbie, Dumfries commented: “My Champion was a very special heifer, had style in abundance and just owned the ring.  When she came in, she brought with her such style and presence, had width, length and was very feminine – a very classy heifer all round.”

Mr Illingworth was presented by a 77-strong entry of Limousin cattle including 13 animals alone in the yearling heifer class, from which emerged the Reserve Supreme Champion, Reserve Female Champion and Junior Limousin Champion, Artnagullion Hanna.  Bred and shown by William McAllister, Parkgate Road, Kells, Ballymena, Co Antrim, the April 2012-born Hanna is by Virginia Andy and is out of Teeshan Evanoush. Said the Judge: “My Overall Reserve was a very smart calf, sweet, with plenty of style, very correct and as a heifer is only going to get better.” In a memorable two days for the Limousin breed, and in this instance for the McAllister Family, Artnagullion Hanna made it an Interbreed double when winning the Junior Supreme Individual Interbreed title.

On the opening day, Artnagullion Hanna had won the Junior Heifer title with Trueman Hosanna from Henry Savage & Sons, Skerriff Road, Altnamackin, Newry, Co Down standing reserve. Hosanna is a daughter of Ampertaine Commander and is out of the Irish-bred dam, Cookstown B1425, dam of the 14,00gns Trueman Grazia sold at Red Ladies in 2012.

On the Friday, the final day at Balmoral, Milbrook Gingerspice teamed up with the Limousin Reserve Male Champion, Iveagh Gilkes, to take the Interbreed Pairs honours in front of Judge Mr Billy Robson, Doagh, Ballyclare. Exhibited by Derek Hume, Maghereagh Road, Randalstown, Co Antrim, Iveagh Gilkes is a Haltcliffe Underwriter son purchased for 21,000gns for his Culnagechan Herd at Carlisle in October 2012.

Back to the Limousin bull classes, and it was Lyndberg Hero from Jim Quail, Northwood, Tullyear, Banbridge, Co Down who was awarded the Male Championship, Junior Male Championship and Reserve Overall Junior award. January 2012-born, Lynderg Hero is entirely homebred being by Lynderg Eisenhower and out of Lynderg Diana. Reserve Junior Male was Artanagh Houston from I & R McIlroy & Son, Banbridge Road, Dromara, Dromore, Co Down. Artnagh Houston is March 2012-born, is by Wilodge Vantastic and is out of Goldies Sonia.

It was a Limousin one-two in the Commercial Championships judged on the second day by noted show calf producer Hugh Dunlop, Holehouse Farm, Cumnock, Ayrshire.  Taking the Steer and Overall Championship was Steady Eddie, sired by Swarland Eddie, and exhibited by N & J Alexander of Randalstown.  The Alexanders also took the Heifer Championship with Eddie Rock which is also by Swarland Eddie, purchased for 10,000gns at Carlisle in February 2011. Back in January, these two animals had secured a Championship One-Two in the crossbred section of the Northern Ireland Young Limousin Breeders’ Club Calf Spectacular held at Ballymena Livestock Market.

Some informal photos can be seen here.

A video of the Interbreed judging can be seen here.