The Dispersal Sale of the Cowporation Herd on behalf of Mr Teus Dekker,  Cowporation BV, Alblasserdam, Netherlands, held at Carlisle on Friday 28 March 2014, saw a top price of 9,000gns paid for the four-year-old Nebo Favorite.   Bred by Mr ML Thomas, Nebo, Llanwrst, Conwy, Nebo Favorite is by Wilodge Vantastic and is out of the Neuf sired Nebo Caryl.  A first calver she was sold with her heifer calf by Ampertaine Commander, Cowporation Iris, at foot.  Purchasing the top price was AJ Ewing, Dunbretton Farm,  Annan, on behalf of a client.

At 6,900gns was Ampertaine Heather who was purchased by Mr M McKeefry for his  Eniver herd of 16 breeding females based in Gargvagh, Coleraine, Co Derry.  Ampertaine Heather is by Wilodge Cerberus and is out of the Glenrock Ventura cow Ampertaine Cancan.  July 2012 born this maiden heifer was bred by Messrs WJ & J McKay, Maghera, Co Derry.

The January 2012 born Burnbank Honey, bred by Messrs D & L Graham, Mains of Burnbank, Stirling, was sold for 5,000gns.  Honey is by Carmorn Dauphin and is out of the Rocky sired Burnbank Damson.  She was sold having been AI’d to Ampertaine Gigolo. 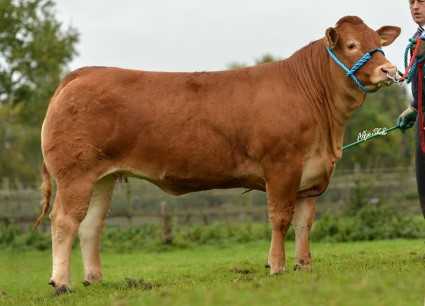 Genoise, bred in France by Rolland Paulette,  made 4,500gns when selling to Mallaber Partners, Park Farm, Burton on Trent.  Reserve Overall Champion at the Dutch National Championships in 2013, this September 2011 born heifer is by Accent and out of Admirable.  She was sold having been AI’d to Ampertaine Foreman.  Another selling at the 4,500gns mark was Ampertaine Harmony a September 2012 born maiden heifer by Ampertaine Elgin and out of the Ampertaine Abracadabra sired Ampertaine Excellence.  Another bred by Messrs McKay, Ampertaine Harmony also went under the hammer to AJ Ewing, Dunbretton Farm,  Annan.

The first and last lots in the ring both made 4000gns.  First up was the 2006 born cow Breiz Izel, bred by Gaec Euan, France.  This cow came with a strong show record behind her having been Champion of Brittany, France, in 2010 and Dutch National Champion in 2011.  By Neuf and out of Uvelzda she made 4000gns when sold to Messrs Smith of Devon.

The last lot of the day, who also made 4000gns, was Ironstone Goldeneye, a 2011 born bull bred by Messrs Smith of Bloxham, Banbury.  By Wilodge Vantastic and out of Montgomery Unny, this bull with a Beef Value of LM+39 sold to Mr D Hillman of  Rodbourne, Wiltshire.