Underpinning the commercial confidence in the Limousin breed the sale saw a strong demand right across the catalogue that resulted in an 84% clearance of bulls forward and an average of £5728.  Three more bulls were sold on the year with two bulls making 29,000gns and over and 32 in all making 6000gns and over.

The top price bull, Foxhillfarm Jasper, is an embryo calf, is by the Wilodge Vantastic son Loosebeare Fantastic and is out of the herd’s noted cow Bankdale Alice.  He was one of a terrific pen of four embryo calves from the Alfords, all the same way bred, who made 35,000gns, 29,000gns, 19,000gns, and 14,000gns to gross 97,000gns on the day.  Along the way Foxhillfarm Jasper was crowned Junior & Overall Supreme Champion at the pre-sale show whilst Foxhillfarm Jupiter (29,000gns) was placed Reserve Overall.  Foxhillfarm Justthejob (14,000ngs) stood second in his class to the Supreme Champion with Foxhillfarm Jackflash (19,000ns) standing second in his class to the Reserve Supreme Champion.  Just for good measure, in the small sale of females the Alfords also had the top price at 9000gns with Bankdale Chanel who is by Sarkley Volt and again out of Bankdale Alice.  A remarkable sale and according to Melanie Alford ‘a day you can only dream about’!  Presiding over the pre-sale show was judge for the day Mr Eric Norman who runs the noted Norman Herd at Little Orton Farm, Little Orton, Carlisle.

In what is perhaps a first within the breed Foxhillfarm Jasper is the third Supreme Champion at Carlisle out of the same cow, Bankdale Alice, and following previous wins for Foxhillfarm Impecabull and Bankdale Exfactor respectively.  Bankdale Alice was purchased for 15,000gns at the Bankdale Dispersal Sale at Carlisle in July 2011 of Gordon Wilson, Bankdale Farm, Wreay, Carlisle, Cumbria.  She is also the mother of the grand slam ‘major’ show winning heifer Foxhillfarm Gracie.

Foxhillfarm Jasper was purchased by Messrs Jenkinson for their noted Whinfellpark pedigree herd at Clifton Moor, Clifton, Penrith.  In a unique arrangement the Alfords have entered, and will show, the bull at the Royal Highland, Great Yorkshire, and Royal Welsh Shows through the summer with the bull going to Whinfellpark thereafter.   Commenting on his Champion bull the judge Eric Norman said:  “This is a real breeders’ bull and was a clear Champion on the day.  He’s a very correct bull, full of breed character, and modern in type.  He has tremendous width, a real balance of natural power and shape without being extreme, and has excellent locomotion.”

Speaking at Carlisle, Michael& Melanie Alford said that Foxhillfarm Jasper had just been a ‘normal calf’ when young but that as he had gone on he had just started to go away from the other bulls.  Noting that he was ‘still growing’ the Alfords said that he was the most naturally powerful bull they had ever bred.  In what was only their second outing at Carlisle sales, this was the second May Sale Supreme Champion in consecutive years.

Northern Irish bulls once again featured strongly through the sale with two selling at 16,000gns and one at 13,000gns.   The first bull at 16,000gns was the first prize winner from class eight, Culnagechan Instructor from Derek Hume, Randalstown, Co Antrim.  November 2013 born, Instructor is got by AI being by the Glenrock Ventura son Ampertaine Elgin and out of Carmorn Velvet a Kype Spartacus daughter.  This bull was purchased by Messrs AE Neachell & Son who runs the pedigree Shrubbery herd at Daniels Lane, Aldridge, West Midlands. 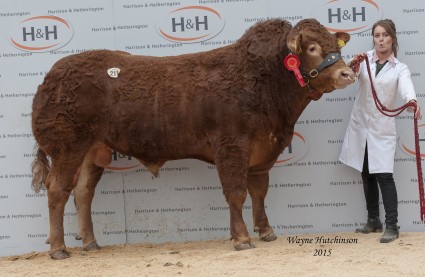 Also at 16,000gns, and another Ampertaine Elgin, was Ampertaine Inferno from James McKay, Upperlands, Maghera, Co Derry.  This bull who stood third in class thirteen is out of the prolific dam Kype tiffany who has had progeny sell up to 14,000gns.  Another bull to go to a pedigree breeder, the December 2013 born Ampertaine Inferno was purchased by Mr JH Neale & Son for their Nealford pedigree herd at Wilkie Down, Boyton, Launceston, Cornwall.

It was a first class Carlisle sale debut for Mark Stewart, Randalstown, Co Antrim, who sold Lenagh IQ for 13,000gns to the Keskadale herd of KD Harryman, Keskadale Farm, Keswick.  This November 2013 born bull had placed as the Intermediate Champion and Overall Reserve Champion in the pre-sale show.  Got by the AI sire Claragh Franco, a Wilodge Vantastic son, Lenagh IQ is out of the homebred Lenagh Chanel who is a full sister to the mother of the noted females Dinmore Elle and Dinmore Glorious in the Dinmore herd of Paul Dawes.

Gunnerfleet Impressive from Ian Handley, Gunnerfleet Farm, Chapel Le Dale,  Ingleton, Lancashire made 10,000gns when selling to the Overthwaite pedigree herd of Mr RS Harker, Overthwaite, Holme, Carnforth, Lancashire.  First in class eight this October 2013 born bull had also stood Reserve Intermediate Champion to the Reserve Overall.  With plenty of breeding behind it Gunnerfleet Impressive is the first son to be offered at sale by the herd’s 17,000gns stock bull Maraiscote Graffiti and is out of the cow Goldies Annie who was originally purchased for 11,000gns.  Another Maraiscote Graffiti son, Gunnerfleet Joplin, later made 6500gns when selling to the Anside herd of Anside Pedigree Livestock Ltd, Braehead Farm, Drummuir, By KeithBanffs, Moray. 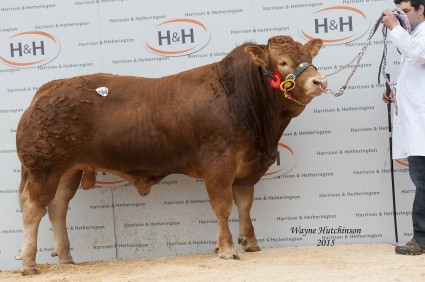 From the junior section, Mereside Intense, from RM Hazard & Sons, Saltby Heath Farm, Skillington, Grantham, Lincolnshire also sold for 10,000gns.  A first prize winner from class twelve, this bull was purchased by DC & KL Hutchinson, Old Spital Farm, Stainmore Road, Bowes, Barnard Castle for their Beldow pedigree herd.  December 2013 born, Mereside Intense is the first son to be sold at public auction by the herd’s 30,000gns sire Honeymoor Favourite, a Haltcliffe Braveheart son.  He is out of Mereside Elegance and comes from the same family as the 40,000gns Mereside Godolphin.

At 9200gns was Westside Irvine from S & GA Potter, Westside, Topcliffe,  Thirsk, North Yorkshire.  This June 2013 born embryo calf is by the 35,000gns sire Plumtree Deus and is out of the French bred Anisette.  Westside Irvine, who is a half-brother to the 9000gns Lodge Henri, was purchased by the noted commercial producers Monzie Farms, Cuilt Farm, Monzie, Crieff, Perthshire.

Also at 8200gns was the December 2013 born Loosebeare Ignition from Messrs EW Quick, Loosebeare Manor, Zeal Monachorum, Crediton, Devon.  An embryo calf, Ignition is by the noted Ampertaine Foreman and is out of Rainbow Ranii a half-sister to the noted Loosebeare herd sire Rainbow Simon. This bull, which carried a big Beef Value of LM+57 was bought by CR Lowis, Waterside House, Howtown, Penrith.  The same vendors also sold the November 2013 born Loosebeare Idiot, a first prize winner in class eleven, for 7200gns.  This calf, by Aghadolgan Emperor and out of Loosebeare Belicity, was purchased by A Cooke, Nantyderi Farm, Llantilio, Crossenny, Abergavenny.

Three bulls made 7000gns.  Homebyres Ibsley from Messrs J Logan, Homebyres, Kelso was first to reach this mark with their May 2013 bull which has stood second in the first class of the day.  Ibsley is by Lowerffrydd Empire and is out of the Haltcliffe Nijinsky daughter Homebyres Bainsi.  Purchasing this bull was WC&D Copland, Nether Collinhirst, Ecclefechan, Lockerbie.

At the same 7000gns mark was Drumduff Ian from Francis Owens, Sixmilecross

From the same class, class five, the first prize winning bull Goldies Inmate from Bruce Goldie, Townfoot, Mouswald, Dumfries, also made 7000gns.  The September 2013 born Inmate is by the 22,000gns herd sire Hartlaw Excaliber, a Wilodge Tonkason, and is out of the Goldies Terence sired Goldies Cherub.  With a big beef value of LM+58, this bull was purchased by K Stewart & Sons, Cocklarachy, Huntly, Aberdeenshire.