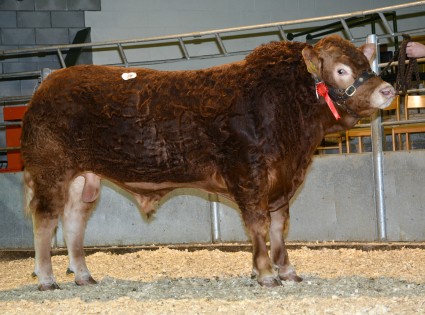 Dyfri Jordan is by the French bred bull Pantin and is out of Dyfri Coleen described as ‘an exceptional daughter’ of Nectar.  With excellent figures for growth and a good maternal value Jordan, who weighed in at 985kgs, was purchased by Haskell Farms who run the Stokeford pedigree herd, and commercial suckler herd, at Stokeford Farm, East Stoke, Wareham, Dorset.

A good crowd attended this fledgling sale in Brecon and saw six bulls sell to a healthy average of £4532.  It is hoped that this new Society sale will continue to develop and sit alongside the Limousin fixtures held at Brecon in May and November each year.

The second top price was the 5000gns paid for the Reserve Supreme Champion Glangwden Jackson from Mr & Mrs CL&FE Jerman, Glangwden, Trefeglwys, Caersws, Powys.  This June 2014 born bull is by the Objat son Powerhouse Emblem and is out of the Haltcliffe Ullswater sired Glangwden Elexis.  Glangwden Jackson was knocked down to A Roberts & Son, for their Nantyreira Herd at Dolau, Llanergyl, Welshpool, Powys.

Judge of the pre-sale show was David Gethin of the Camlas Herd at Cwmcaebitra, Sarn, Newtown, Powys.  His Supreme Champion came in the shape of Garyvaughan Jandy from Mr CV Lewis, Buttington New Hall, Buttington, Welshpool, Powys.  This July 2014 born bull is by the herd stock sire Plumtree Deus and is out of the Mynach Trey daughter Redpaths Candy.  Purchasing the Champion at 4500gns Mr Parry, Goitre Farm, Kerry, Newtown, Powys.

Leading the small show of females at 4000gns was the nine-year-old cow Corridan Chelsea from Mr & Mrs M Alford, Foxhill Farm, Cullompton, Devon.  Due to calf in August to Ampertaine Gigolo, the sire of the world record breaking bull Trueman Jagger, this cow is by Goldies Terence and is out of Corridan Trinket, a Ronick Iceman daughter.