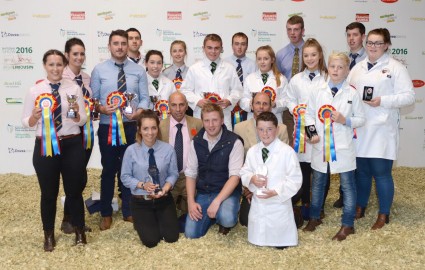 Limousin breeders travelled from far and wide to attend the International Limousin Congress held in Southern Ireland last week. It was a spectacular event being a credit to Irish Limousin and an honour that the Young Limousin Breeders got to have the Anglo Irish finals on the concluding day of the conference. Saturday 27th August saw teams from Scotland, England, Northern Ireland, Wales and Southern Ireland all competing at national level to be crowned the champions.

Under the scrutiny of judges Richard Bartle of the Dinmore herd, Richard O’beirne from the Millburn herd and Kim Steele Nicholson from the Ballyrobin herd the 17 competitors had to judge two strong classes, one being of yearling heifers and one of yearling bulls. They were then asked to give a set of reasons on the heifer class to the judges where they were marked for their accuracy of statement, comparison of animals and their style and ability. After this they then got given an animal they had never met before and were judged on their showing and handling ability of the animal.

The standard of the competition was extremely high with Ireland team taking an impressive 3rd successive victory. The Irish team was made up of Shannon Kinahan and her brother Aidan Kinahan, alongside Owen Hester and Rachel Moloney with the top three scores counting towards their overall team total of 777. Taking second place was team Wales following closely behind with 774 points, followed by Scotland in 3rd, England in 4th and Northern Ireland in 5th. All competitors should be proud of their achievements throughout the day as competition was fierce and they were all a credit to the Limousin breed!

Commenting on the weekend, Judge Richard Bartle, who himself had been judging the commercial section of the ILC show on Friday said “I felt that the Young Breeders did a great job throughout. Judging two classes that were particularly difficult, they coped very well with the conditions. The standard of everyone was excellent and even the younger members coming through have a great future ahead of them. I would like to congratulate all the competitors and hope they continue to be involved in Limousins as they are a credit to the breed.”

In the individual competition it was YLBC chairperson, Stephanie Dick, which came out with top honours representing Scotland. Stephanie runs her own Stephick Limousin herd alongside the noted Ronick herd of her father’s in Stirling. She is no stranger to the show ring and this is not her first success at the Anglo Irish finals, she has won numerous accolades across stock judging and showing competitions in recent years and she currently aims to keep raising the profile of Young Limousin Breeders.

The prizes were spread well across the countries and taking second place to Stephanie was Elfyn Wyn Jones who was representing Wales, followed closely by Shannon Kinahan who was representing Ireland. Keeping it in the family, Aidan Kinahan went on to lift top honours in the junior section of the competition. Aidan is another one who is no stranger to winning, he has had success in the past as he was placed 2nd overall at the finals last year also and at a young age he has a bright future ahead of him. Aidan helps with the families’ prize winning Cush commercial herd.  He was followed by team mate Owen Hester who took second place and Ruth Hamill from Northern Ireland taking a very commendable 3rd.

The YLBC would like to thank Paul Sykes for all his help, the coordinators of the YMA for their hard work organising the event and the stewards for their endless efforts in making sure the Young Limousin Breeders are so well supported at these events. Also to the handlers who provided the stock for us to judge. We would also like to thank the ILC for their tremendous efforts on putting on a fantastic weekend and thank them greatly for holding the YMA finals at such a prestigious event.