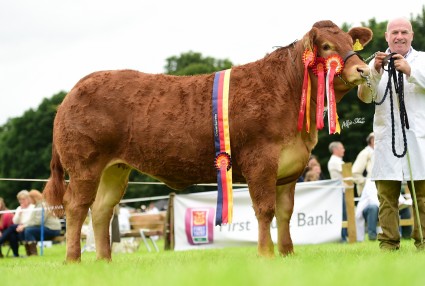 The annual NI Limousin Championship was held at Antrim Agricultural Show grounds on Saturday 23rd July and again the event was well supported by local breeders and spectators.

The Overall Championship winner was the Female Champion Shanhill Jodie bred by L Crilly, Newry who had caught the eye of judge Sarah Jane Jessop from Stirling, Scotland.   Shanhill Jodie is sired by Ampertaine Elgin and is out of dam Limo Fay a Wilodge Cerberus daughter. Shanhill Jodie had already made her mark on the show circuit in other shows this year with her being Limousin Champion at  Armagh and Interbreed Champion at Newry.   Larry Crilly also gained Reserve Senior Female with his November 2014 born heifer Shanhill Jilly a full sister to the Overall Champion.

Taking the Reserve Overall Championship was the Junior Champion, and Overall Male Champion Carnew Legend bred by J Aiken, Dromara.  This July 2015 born bull is sired by the past Male Champion at Balmoral Champion Show, Lynderg Hero.  Legend is out of the home bred dam Carnew Billiejo a Samy daughter.  The Calf Championship went to the heifer calf Millgate Melody bred by M Loughran, Dunamore. This January born calf is sired by Norman Ely and is out of a homebred Condor dam Millgate Harmony.

The Intermediate Champion title and Reserve Male Champion was given to Ballyhone Lucas bred by Brian Hall, Newtownabbey.  February 2015 born this bull is also sired by Ampertaine Foreman and is out of a homebred dam Ballyhone Gigi.