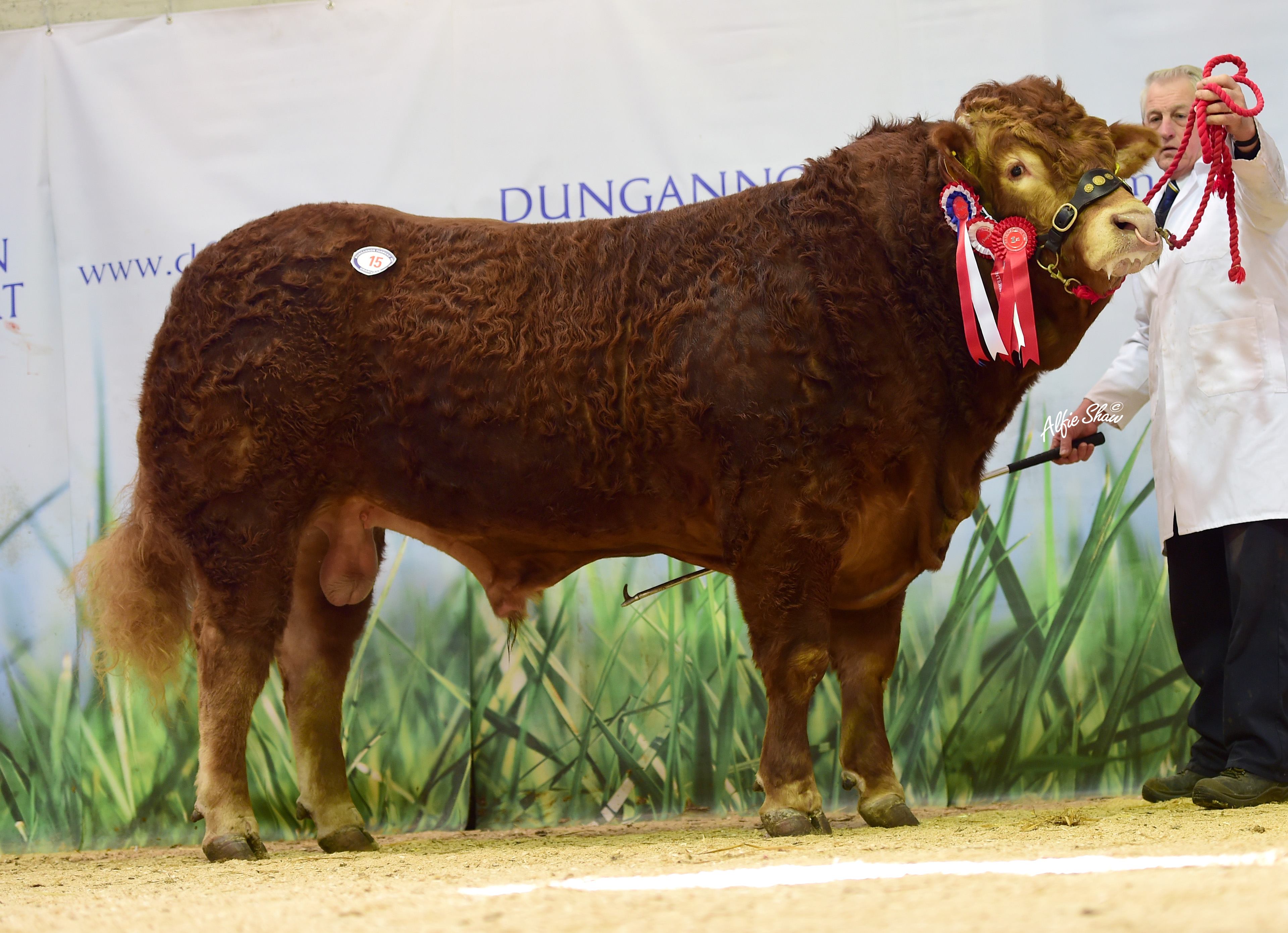 There was a solid demand for Limousin bulls from commercial producers at the British Limousin Cattle Society’s bull and female show and sale held at Dungannon Mart on Monday 13 February 2017. A 100% clearance rate was achieved of the fifteen bulls presented for sale and the average of £2987 was up £285 on the corresponding sale last year.

The next highest price at 3600gns went to the Senior Male Champion Lynderg Lancaster a homebred bull by N.I. Limousin Club President Jim Quail, Banbridge. This May 2015 born bull is sired by the noted Lynderg Hero and is out of homebred dam Lynderg Ethel.   A first prize winner in his class this bull now heads to new owner Daniel Harrison, Annalong, Co Down.

A Loosebeare Fantastic son Ballyhone Leon realised 3500gns for breeder Brian Hall, Newtownabbey, Co Antrim. He was placed first in his class and boasts a beef value of LIM+39 which puts him in the top 10% of the breed.  The purchaser was Jim Hayes, Dungannon, Co Tyrone.

Meanwhile judge George Conway awarded the Reserve Overall Supreme Champion to Slieve Lord, a homebred bull by father and son John & Shane McGeehan, Fivemiletown, Co Tyrone.  His sire Slieve Intostyle has Ampertaine Commander and Elite Bearl in his pedigree.  Slieve Lord made 3200 gns on the day and was bought by Martin Meehan, Portaferry, Co Down.

Females presented at the show and sale were young in age and the top price at 1700 gns went to Quinliz Lorna bred by Roger Quinn, Swatragh, Co Derry.  This June 2015 daughter won Female Champion in the show and is sired by Ampertaine Foreman.   Purchaser of this heifer was Derek Campbell, Magherafelt.

Junior Male Champion was won by Carmorn Lionking a homebred bull by C & F McAuley, Toomebridge, Co Antrim.  An October 2015 Goldies Hallmark son he sold for 2800 gns and was purchased by A J Browne & Sons, Claudy.

Reserve Junior Male was another win for C & F McAuley. A November 2015 bull he is sired by the homebred Carmorn Cantona and out of Carmorn Bethany.  He sold on the day for 2600 gns and was purchased by Emmett Gildernew, Dungnannon.

The N.I. Limousin Cattle Club would like to thank auctioneer Dungannon Mart, judge George Conway and sponsors of this event Norbrook Ltd for their continued support.