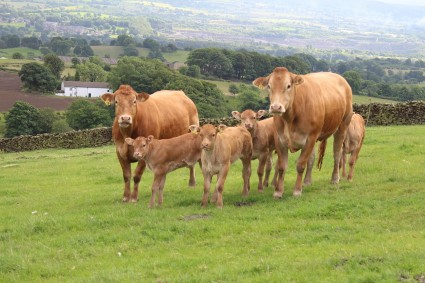 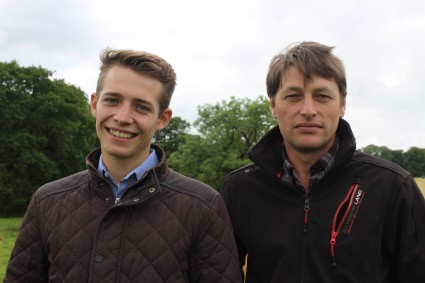 The Limousin is the breed of choice for many beef producers looking for a hardy animal that will produce the type of store calf that the market is looking for and the Towlers are no exception. Their business is based on store cattle and finished lamb production, with a 75-cow Limousin herd and 500 Mule and Texel ewes.

Some 150 acres of SDA (Severely Disadvantaged Area) land around the Scriddles Croft steading belongs to the family, but additional grass has to be rented in, mostly on 11-month tenancies. The farm land rises to 1,000 feet above sea-level and is situated in a very high rainfall area, with a heavy clay soil.

David Towler and his son, William, usually run three stock bulls, to allow multiple groups of cows to be run in the breeding season and reduce the risk of poaching. David adopts a flexible attitude to bull purchases, but he is usually prepared to pay in the region of £5,000.

The current team includes the home-bred Scriddles Ash an April 2005-son of Greenwell Samson a bull purchased in 2002 from Ian Nattress’s herd at Greenwell Farm in Lanchester, County Durham. Samson’s dam is Baird Rae, which came from John Baird, Littlehampton, W Sussex. David describes the 11-year old Ash as “very easy calving” and he is therefore often used on the heifers.

The Towler family are personal friends of Procters herd manager, Gary Swindlehurst and have always admired the stamp of cattle that he produces at Procters farm near Clitheroe in Lancashire. This led to the purchase of the April 2009-born Procters Enigma, which was bought privately as a yearling. He is by Haltcliffe Vermount and out of Procters Tillergirl.

David singles out one particular animal which is sadly no longer in the herd, but which has made a long-lasting impression. He is the January 2005 Procters Ajax.

“Ajax is by Ionesco and has produced some very good females,” says David. “They are stretchy, without being too large. When I’m looking for a new bull, I don’t want anything that has been fed too hard, because I would be concerned about whether he would maintain his condition, once he is turned out and starts working.

“It’s good to have figures to go with a potential sire and I mainly focus on calving ease and growth rates,” he comments. “However William has a lot of interest in pedigrees and EBVs and he will spend many hours poring over the catalogues. A bull has to look pleasing to the eye and he must also have a good temperament, particularly as we have to move groups frequently throughout the grazing season.”

Another stock bull which is highly regarded is the 2015 purchase, Redland Inspiration, which was sourced at Skipton auction mart and came from Mark and Helen Lewis of Northlands Farm, Hunsingore, between Harrogate and York. Born in June, 2013, his sire is Eldorado and he is out of Redland Tiffany.

Limousin cows at Scriddles Croft have to be hardy as they are turned out on the hills over the summer. William has recently returned to work at home after completing a course in agriculture at Askham Bryan College near York and has already made a couple of purchases from noted pedigree herds. 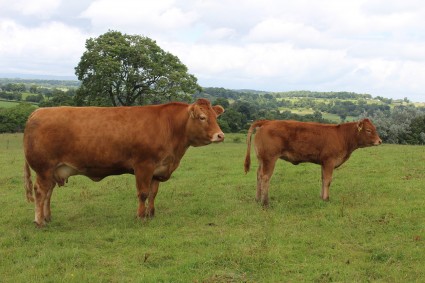 These include the February 2009 Tomschoice Exotic, bred by James and Sarah Cooper of Hill Top Farm at Dacre, near Harrogate. Exotic, a Ronick Member daughter out of Tomschoice Unity, was accompanied by her January 2016-born calf by Kaprico Eravelle.

Another new addition is Haltcliffe Ida, a daughter of Haltcliffe Gains from Messrs Ridley’s well-respected herd at Hesket Newmarket in Cumbria.  Born in March 2013, she arrived in calf to Haltcliffe Fencer.

David says: “The herd is kept pure as I always found it quite difficult to source the right type of replacement female, especially since the Holstein started to exert such a heavy influence on the suckler cow industry. I much prefer to breed my own, selecting most of my heifers before they are 12-months old.

“I’m looking for an easy-calving female; in fact we have never had a caesarean in the herd and very seldom have to intervene,” says David. “Cows also have to be built to last and will usually achieve an average seven or eight calves over a lifetime; our oldest cow at present is 17 years.”

Like many other herds in the region, the herd is mainly spring-calving, with a small group that calve in the autumn. This eases pressure to get heifers in calf and helps with cash flow, by extending the sale period. The cows leave their cubicle housing after calving in early May, weather permitting, with the herd vaccinated against BVD and calves protected against pneumonia at housing.

The main silage cut is taken at the beginning of July and clamp-stored, although a small quantity of second cut is taken on the rented ground. It is mixed with straw, with minerals added, following the annual silage analysis. The region’s soil is high in molybdenum, which locks up copper and has led to a copper bolus being administered annually.

“We’ve recently invested in a tub mixer, to stop the cows selecting out silage and leaving the straw. It seems to be working well, although of course the price of the machine and its running costs have to be taken into account. On occasions when we’re short of silage, we’ve added molasses to the ration. The mixing system gives us greater control of the diet and the weigh cell allows us to keep a more accurate record of costs.” 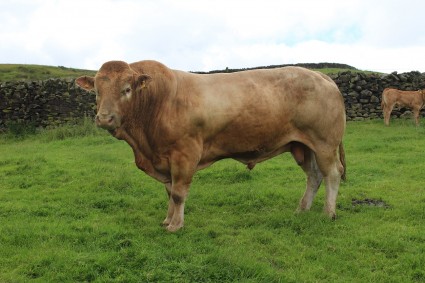 Bulls have always been left entire, for faster finishing and to free up space in the buildings. The spring-born calves are offered creep feed at housing, which is usually in October or November, with the majority weaned in January, although well-grown bull calves and some of the heifers may be taken off their dams earlier. The home-mixed grower diet contains a 21% protein pellet plus barley, to produce a 14-15% ration. It has replaced the previous 16% protein bought-in concentrate and has given a saving on inputs.

“Our finisher customers are seeking bulls under 12 months, due to the 16-month rule, so we have never gone down the route of castrating male calves,” says David. “This policy also gives us additional summer grazing. Historically, we haven’t weighed our calves, but we have recently built a new handling system and have plans to install an electronic weighing machine.”

Bull calves are taken to 10-12 months old, while heifers are usually sold at 15-18 months old after a summer at grass, with all the progeny sold at nearby Skipton Auction Mart. Last year, bulls averaged about £1,000, with heifers at £950 this spring.

The father and son team employ no outside help, aside from bringing in a local contractor for silage-making. They are determined to stick with beef cattle production, despite the industry’s many ups and downs over the past few years. David makes light of the challenges that come with the harsh climate and reliance on temporary grazing.

“Some of the fields that we rent on a temporary basis are held over a period of years, but in some cases, landlords prefer to avoid any kind of commitment. We always keep a look-out for grazing that comes up for rent, but we never attend an auction without a maximum figure in mind, because of course we have to be able to turn a profit.

“If we can find grazing close to the farm, we might be prepared to pay a bit extra, due to the savings on fuel and the reduction in the time it takes to reach our livestock. One key element is controlling the amount of money we spend on other people’s land.

“There have been times when we’ve had to keep heifers inside for a little longer than normal, or when we sell them slightly longer, due to a shortage of grazing. We also sold some ewes with lambs a couple of years ago, but in generally, our system is working well.”

The family bought Scriddles farm in 1969, with a Limousin bull first being purchased in the early 80s. The Limousin continued to play a key role in shaping the business when the farm had to be re-stocked after being classified as a contiguous case and culled during the foot-and-mouth crisis. It is clear that the breed will remain for the years to come.

“I believe that my father, William, was one of the first farmers to purchase a Limousin when they were imported into this country,” says David. “He wanted something to use on his dairy heifers and invested in a half-share in a bull with one of his neighbours.

“Limousin calves are born small but quickly get up on their feet. The cows are hardy and durable and produce calves with good growth rates. In addition, Limousin cull cows always achieve top prices when they are culled. Most importantly, however, our customers like