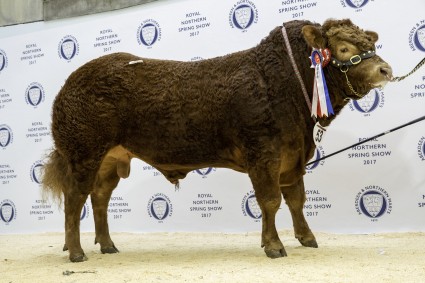 Sired by Jalex Itsallgood and out of the Vagabond daughter Greenwell Dior, this 20-month-old bull had earlier picked up the Limousin Supreme Championship in the pre-sale show judged by Tracey Nicol, Balthayock Home Farm, Perth. Purchasing the top price was N Meldrum, Shenval, Ballindalloch, Banffshire.   Topping the sale at Aberdeen followed hard on the heels of the sale at Carlisle a fortnight earlier where Andrew Gammie made 18,000gns for his bull Westpit Lowry.

In all sixteen out of the eighteen bulls forward sold to average a healthy £4515. Three more bulls sold on the year and averages were up by £390.

Two bulls from RS Duncan, Achdregnie, Glenlivet, Ballindalloch made 4200gns.  The first of these was Livet Largo which went to C&G Gordon. Lost Farm, Strathdon.  Livet Largo, an August 2015 born twin to a male is by the homebred Livet Franco and out of Kilronan Connor.  The second bull at 4200gns was two lots later in the shape of Livet Loki who was also August 2015 born.  This calf was sired by Livet Ike and is a heifer’s calf being out of Emslies Izbicky.  Purchasing this bull was A&M Simpson, Mains of Leslie, Insch.