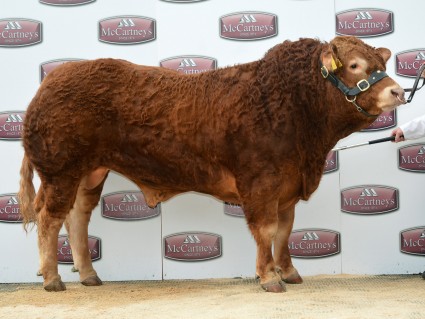 Sired by Emslies Integrity and out of the Plumtree Deus daughter Garyvaughan Inky, the top price Garyvaughan Linky was purchased by RW & J Edwards, Tyn Twll, Llanarmon Dyffryn Ceiriog, Llangollen, Clwyd .  At the recent BLCS Sale in Carlisle the first Garyvaughan calf offered at sale sired by Emslies Integrity, an Emslies Colossus son,  had made 9000gns.  The Garyvaughan herd was judged to be the Champion Herd in the 2016 North West Midlands & North Wales regional herd competition, a title it has won in each of the last three years.

In what is only the third staging of this new and establishing early Spring sale fixture at Brecon, sixteen out of the twenty two bulls forward sold (73%) to average a solid £3596.

At 4300gns was Killerton Lava from Mr & Mrs PW & SM Greed, Columbjohn Farm Ltd, Rewe, Exeter, Devon.  Featuring early in the catalogue this bull is by Kaprico Donato, an Ampertaine Abracadabra son purchased for 7500gns in 2010, and is out of Killerton Etna.  Purchasing this April 2015 bull was TP & TI Rogers, Manor Farm, Monkland, Leominster, Hereford.  Earlier in the day this bull had stood as Senior Champion in the pre-sale show judged by Gareth Thomas of the Orllwyn Herd, Orllwyn Farm, Cwmffrwd, Carmarthen.  The Killerton herd also had the day’s Junior and Overall Supreme Champion in the shape of the August 2015 born Killerton Longjohn.  This bull, got by the AI sire Crossdykes Goliath, is out of Killerton Hotpants.  Purchasing the Champion at 3900gns was O&H Moyle, Brynunty, Llanbrynmair, Powys.

The third last bull in the catalogue, Temeside Limitededition from VAS & TVS Corbett, The Gorther, Felindre, Nr Knighton, Powys, made 3850gns when selling to RB & JI Carter, Twyning Ash, Uley Lanem Coaley, Dursley, Gloucester.  September 2015 born this bull is by the AI sire Wilodge Goldcard and is out of Temeside Fragrance.  Temeside Limitededition had been previously shown at the 2016 Brecon Stars of the Future Show where he had won the Reserve Junior Male Championship.

Selling at 3650gns was Twemlows Leo from WL & JA Forrester, Twemlows Farm, Higher Heath, Whitchurch, Shropshire.  Another got by AI, the April 2015 born Leo is by Anside Flint and is out of Twemlows Ffion.   Purchasing this bull was JJ Price & Co, The Farm, Glynbrochan, Llanidloes, Powys.

Following the sale of bulls seven heifers were also sold to average £1624.50.