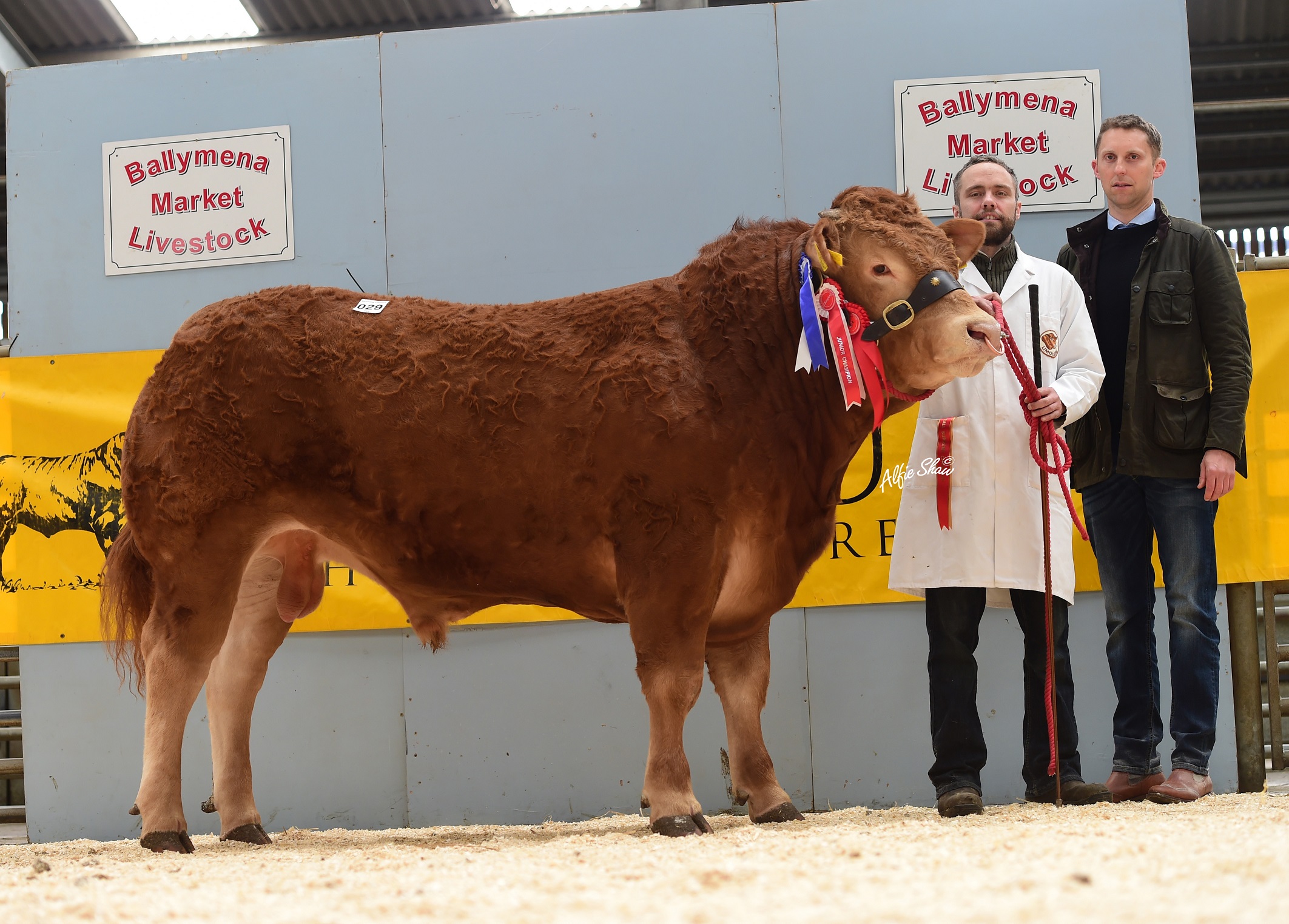 The British Limousin Cattle Society’s Show & Sale was held on Monday 1 May 2017 at Ballymena Livestock Mart.  With buyers present from all over Northern Ireland, 31 bulls found new homes at a healthy clearance rate of 82% and to an average of £2,752 up £337 on the same time last year.  12 females also sold at a clearance rate of 80%, and selling at an average of £1,502.

Realising the top price of 4000gns on the day was Ballyrickard Macho bred by Mr Ian Davidson, Larne, Co Antrim.  This January 2016 born bull is sired by Ampertaine Elgin and out of the home bred dam Ballyrickard Eleanor.  He caught the eye of judge Owain Llyr from Ruthin, North Wales and at the pre-sale show was awarded Overall Supreme Champion, Overall Male Champion and Junior Male Champion.  With a beef value of LM+32 and muscle depth of 5.4 he was purchased by Kenneth Houston, Hillsborough, Co Down.

Next was Culnagechan Lasvegas bred by Derek Hume, Randalstown, Co Antrim selling for 3200gns.  This October 2015 born bull is sired by Iveagh Gilkes, who was purchased at Carlisle in October 2012 for 20,000gns and is out of the homebred dam Culnagechan Goldie.  With a beef value of LM+39, placing him in the top 10% for the breed, he now heads to the farm of Brian Moore & Sons, Crumlin, Co Antrim for their large commercial unit.

Following at 3100gns and standing third in his class was Ballyhone Milo bred by Brian Hall, Newtownabbey, Co Antrim.  This January 2016 born bull is sired by Ampertaine Foreman and out of the home bred dam Ballyhone Daisy, a Wilodge Vantastic daughter.  He now heads to new owner Roland Graham, Enniskillen, Co Fermanagh.

Newhillfarm Liam stood second in his class and sold on the day for 3000gns.  Home bred by Michael & Ann McPolin, this November 2015 born bull is sired by Kaprico Eravelle and out of the home bred dam Newhillfarm Iris.  With a beef value of LM+34 he was purchased by Dale Irwin, Roslea, Co Fermanagh.

Fetching the top price of 2000gns in the females was Rahoney Jewel bred by H & D McFarland, Trillick, Co Tyrone.  This June 2014 female is sired by Wilodge Cerberus and out of the homebred dam Rahoney Abigail.  She is also a full sister to Rahoney Geoffrey who was sold in Carlisle in February 2013 for 23000gns.  She now heads to new owner W J Marshall, Ballymena, Co Antrim.

Next was Lenagh Melanie bred by Mark Stewart, Randalstown, Co Antrim.  She stood second in her class and sold for 1800gns.  This September 2016 female was one of the first heifers to be offered for sale by the renowned sire Netherhall Jackpot and her dam Laydeviewfarm Donna is an outstanding breeding Sympa cow which milks well.  Melanie was purchased on the day by A Murphy, Waringstown, Co Armagh.

The N.I. Limousin cattle Club would like to extend their grateful thanks to Owain Llyr who travelled from North Wales to judge the pre-sale show.  Thanks also go to sponsors Connon General Merchants, Ballymena and auctioneers J A McClelland at Ballymena Livestock Mart.