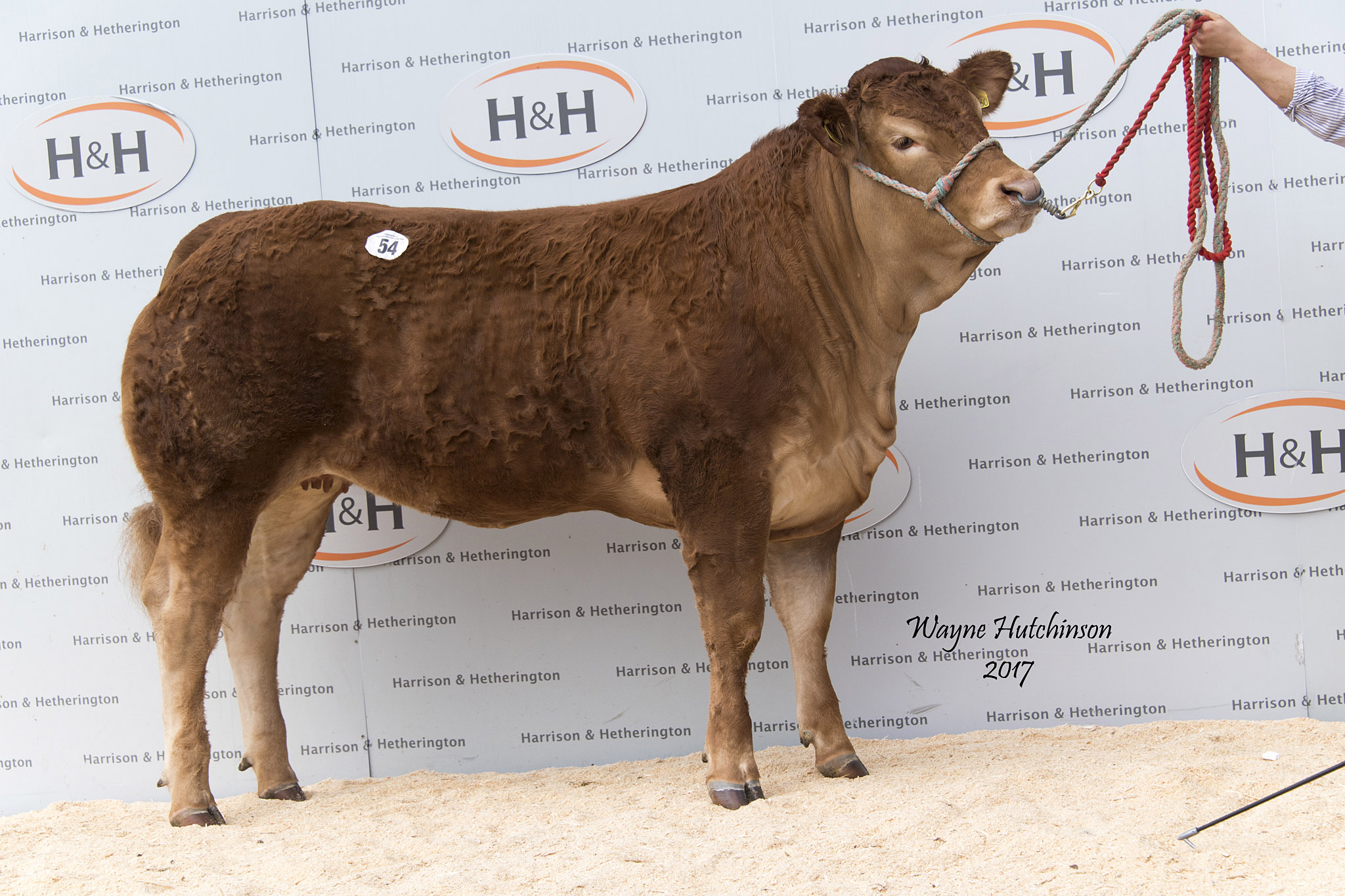 The ongoing strong, and seemingly insatiable, demand for pedigree Limousin females was left in little doubt following the British Limousin Cattle Society’s Spring Female sale at Borderway Mart on the afternoon of Friday 5th May.   At the end of the day, a packed sale ring saw 29 served heifers average £3990, 110 maiden heifers average £4294 and an overall sale average of £4162 for 142 animals, an increase of £422 on the year for 62 more sold.

A mighty clearance rate saw 87% of all animals sold, these heading to a combination of both pedigree and pedigree buyers looking to invest in the quality genetics on offer.  In all, 142 females were sold with the all-in trade for the day achieving sales in excess of £600,000.

Striking the high note for the day at 42,000gns was the outstanding January-16 born maiden heifer Foxhillfarm Mammamia from Mr & Mrs M Alford’s Foxhillfarm herd from Cullompton, Devon.    An embryo calf she is one of four heifers at this sale that were the first to be offered out of the noted 125,000gn Glenrock Illusion, jointly owned with the Swalesmoor herd.  As a calf, Mammamia was Junior Limousin Champion and Reserve Interbreed Champion at the Stars of the Future show in 2016.  By the 38,000gns Foxhillfarm Irishlad now owned by the Tweeddale and Goldies herds, she has a Beef Value of LM49, in the Top 1% of the breed.   Taking her home along with two further purchases from this herd were Messrs BC and JW Evans, Penrhos, Trefeglwys, Powys.

The second top price for the day also came from the Foxhillfarm stable in the shape of Foxhillfarm Missworld.  Similarly-bred to the top price Mammamia, this stylish January-16 born heifer is an embryo calf out of Glenrock Illusion and by Foxhillfarm Irishlad.  With growth EBVs and a Beef Value in the Top 1% of the breed, she also heads to the Penrhos herd of Messrs BC and JW Evans in Powys.

In a memorable day for the Foxhillfarm team, the next leading result came in the shape of Foxhillfarm Liberty.   A June-15 born heifer out of the famous Bankdale Alice this time, and by noted sire Broadmeadows Cannon, she sold for 19,000gns, once more heading to the Penrhos herd of Messrs BC and JW Evans.   Liberty’s dam, Bankdale Alice was purchased for 15,000gns at the dispersal sale of Mr G Wilson’s Bankdale herd in 2011.  She has produced breeding stock in excess of 380,000gns, including bulls Foxhillfarm Impeccabull, Inthegold, Jackflash, Jasper, Justthejob and Lordofthering.

Second in to the ring for Foxhillfarm was Foxhillfarm Mary.   Full sister to the well-known Foxhillfarm Gracie out of Bankdale Alice and by the noted sire Wilodge Vantastic, she sold for 15,000gns to head across the water to Mr E Lynch, Drumbannow, Co Cavan, Ireland.

On the day, Michael and Melanie Alford’s Foxhillfarm herd sold 17 lots to average over an incredible 10,600gns.

Next up were three heifers all sharing a headline at 10,000gns.  The first of these was Procters Jamaica selling for Procters Farms Ltd, Clitheroe.   Born October 2014 Jamaica is out of a Greenwell Ronick dam, Procters Divine, and sired by the noted Swarland Eddie.   Procters Divine has bred bulls to 21,000gns in the shape of Procters General, Senior Male Champion at Carlisle in October 2012. Jamaica was sold AI’d to Gunnerfleet Hicks and heads to the Ladybowers pedigree herd of Mr L J White near Bamford, Derbyshire.

Also at 10,000gns, and again from the Alford’s Foxhillfarm herd, was Foxhillfarm Missmoneypenny.   The third of the four embryo calves out of Glenrock Illusion and by Foxhillfarm Irishlad, this tidy January-16 born heifer heads in to Aberdeenshire to Mr G Morrison, Inchbruich, Banff.

The third in the trio at 10,000gns came in the form of Tweeddale Lollipop from Messrs J Watson and Co’s Tweeddale herd near Berwick-upon-Tweed.      Bred by Foxhillfarm Irishlad and half-sister to the two top-priced heifers on the day, this October-15 born was the second to head to Ireland and the Grangeford Limousin herd of Mr G Morrison in County Carlow.

From north of the border next at 9000gns came the July-15 born Grahams Lilley.  From Messrs R&J Graham near Stirling, she is maternal sister to Grahams Lorenzo who sold for 40,000 to the Wilodge herd at the Limousin National Show in 2016.  Lilley heads once more to Ireland and the Glenford herd of Mr K Stephenson, County Wicklow.

A further heifer from Procters Farms Ltd, Procters Leiha, made 8000gns.    This is a March-15 born heifer out of a Haltcliffe DJ dam, Procters Harleiha.  In a run of success on the day for sire Ampertaine Foreman, she made 8000gns going to the Telfers herd or Messrs E Telfer & Son, Stocksfield, Northumberland.

Four further heifers all hit the 7,500gns mark in a sale teaming with headlines.   They were Foxhillfarm Monalisa for Mr & Mrs M Alford.  A March 16-born full sister to Foxhillfarm Irishlad, noted earlier as the sire of the leading prices on the day, she headed to the Northern Ireland home of Messrs D& R McFarland, Rayderjem herd, County Tyrone.

Second through the ring at this price was the August 15-born Foxhillfarm Lookatme, again from the Foxhillfarm team.   Out of Foxhillfarm Gracie this time and by the noted Guards Boomer, she went home in the lorry of Messrs R7J Graham to the Grahams herd near Stirling.

The final Foxhillfarm headline of the day from the Alfords was the January 16-born Foxhillfarm Mellie.  An embryo calf and full sister to Lookatme above, she went to Messrs W&R Thomson’s Cairnbog herd near Kilsyth, Glasgow.

The fourth heifer in the catalogue hitting the 7,500gn spot was Heathmount Leanna for McKinney Bros, County Derry, Northern Ireland.  In a strong line-up of heifers, she stood out for Mr D Thomas, Henbant, Lampeter in Carmarthenshire.   Out of Heathmount Hannah, going back to Ardlea Dan, and sired by the well-known Ampertaine Gigolo, she is an August 2015-born heifer.