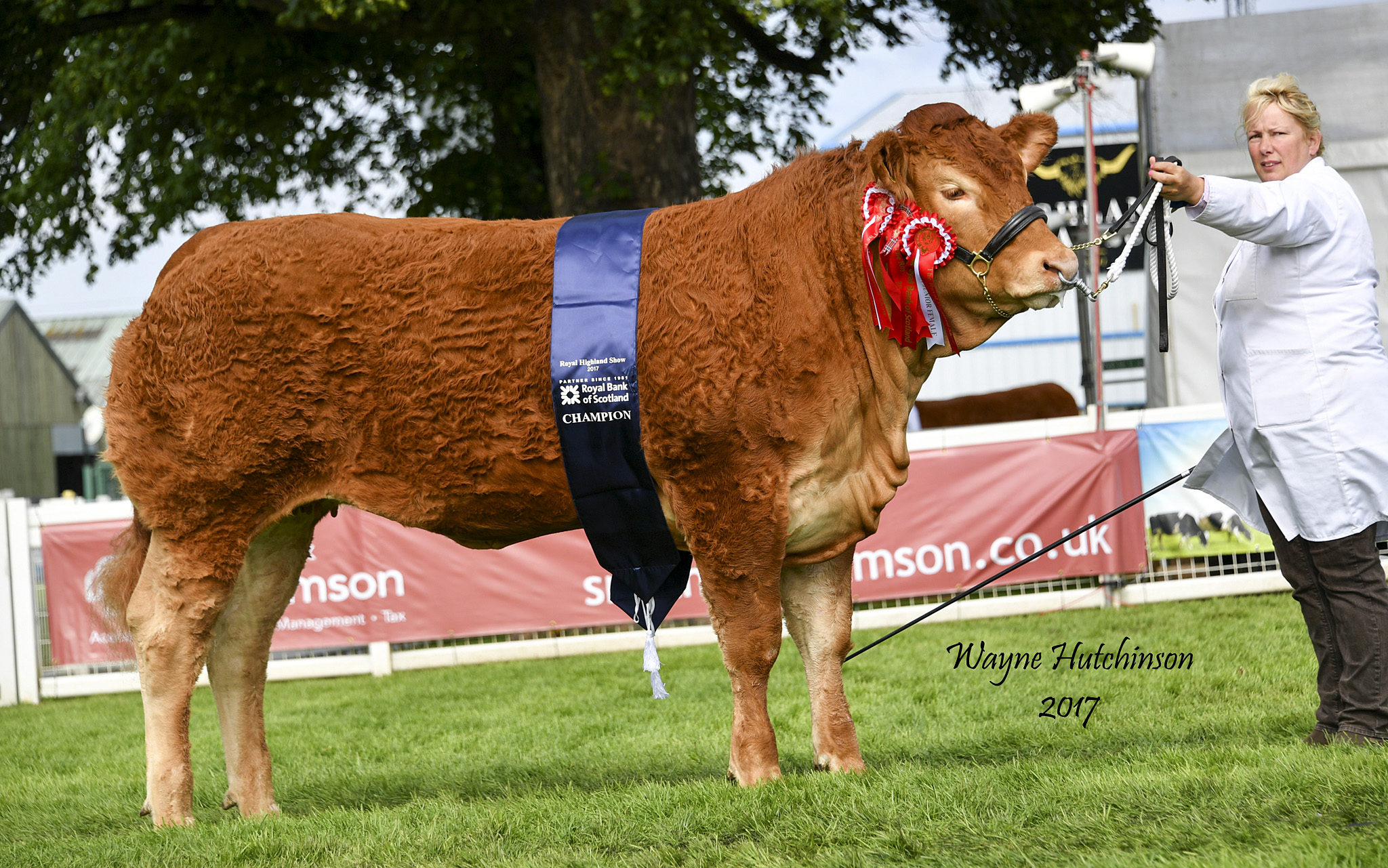 On what was described as near perfect show conditions the ‘dynamic duo’ of Foxhillfarm Mammamia and Foxhillfarm Looksthepart came through to sweep the board and win the Limousin Supreme and Reserve Supreme Championships respectively on the opening day of the 2017 Royal Highland Show held at Ingliston, Edinburgh on Thursday

On her way through to the title Mammamia had picked up a number of rosettes in the Limousin classes during judging. Judging the Limousin entries on the first day of the show was Mr Gary Swindlehurst of the Procters Herd, Clitheroe, Lancashire. Out of a notable entry of 67 animals Mammamia had clearly stood out of the crowd. She picked up wins as the Limousin Female Champion, Junior Female Champion, Best Overall Junior Animal and Best Animal Bred by Exhibitor. After the judging Mr Swindlehurst described Mammamia as being an “outstanding feminine specimen” with “good top style and side plates”

The January 2016 embryo born maiden heifer, brought into the ring by Mrs Alford is by their homebred 38,000gns Foxhillfarm Irishlad and out of Glenrock Illusion, the 125,000gns female world record price holder. She went through the ring at Carlisle in May for 42,000gns, with the Alfords selling her on the basis that they would show her over the summer season. As a calf, Mammamia was Junior Limousin Champion and Reserve Interbreed Champion at the ‘Stars of the Future’ show in November last year. The Highland show was her first outing this season and the Interbreed Championship judging saw Archie MacGregor of the Allanfauld herd, Kilsyth put the stylish heifer into the Interbreed Championship top spot.

In awarding her the supreme Interbreed Champion spot Mr MacGregor gave praise to her width, length and locomotion, applauding her for her outstanding quality

In what transpired to be a day for the ladies, Mr Swindlehurst placed Foxhillfarm Looksthepart as reserve female Champion and reserve overall Limousin Champion. Also exhibited by the Alfords, and also home bred, the August 2015 born heifer is by Guards Boomer out of the multi-award winning Foxhillfarm Gracie, who was breed champion at the Highland show and the Royal Welsh back in 2013. Looksthepart was the reserve junior female at the Royal Welsh last year and in what is turning out to be a successful show career in early June she was reserve breed champion at the Royal Cornwall show, only giving way to her stable mate Foxhillfarm Limited Edition.

Delighted for her success Melanie Alford described the win as a ‘dream come true’ and she was particularly impressed with the youngster’s performance against the older females in the ring. Mrs Alford said that she is looking forward to exhibiting the elegant heifer at both the Great Yorkshire and the Royal Welsh over the summer.

Other exhibitors also had a fine day. Messrs R and J Graham, Airthrey Kerse Dairy Farm, Bridge Of Allan, Stirling collected first and second place in the opening class of the day with their 12-month old heifers both sired by Ampertaine Elgin out of Millbrook Gingerspice. Piping her sister Grahams Malibu to top spot was Grahams Melody.

The Graham family had a number of other placing’s with their older home-bred females during the afternoons female judging session. Their October 2015 heifer Grahams Lexi was placed fifth in her class and Grahams Lulu, born May 2015 came in third in hers behind two heifers from W J and M Mash Ltd who had made the long trip from Chesham, Bucks. Their January 2015 born heifer Brockhurst Little Gem took first spot in the class for females between two and three years of age. By Wilodge Vantastic she is out of Ronick McAinsie. Brockhurst Little Gem was runner up in her class at last year’s Great Yorkshire Show; she is half-sister to Brockhurst Heavenly who scooped the Limousin Overall Supreme Championship and the Beef Individual Interbreed Championship at the same show. Reserve in the class went to Little Gems half-sister Brockhurst Lucy, also January 2015 her dam is Brockhurst Bolshoi, a past interbreed champion at the Great Yorkshire Show.

As the female judging came to a close, last year’s Highland Show Limousin Supreme Champion and Reserve Interbreed Champion Whinfellpark Glittered of Messrs Jenkinson, Penrith, Cumbria, shone through a quality field to take first place in the senior female class. The 2011 born cow by the herd stock sire Wilodge Cerberus, Whinfellpark Glittered is out of Grange Orleans a cow purchased from an on-farm production sale from the herd of George Smith, Daventry, Northants.

As the male judging got under way, the Graham family had more to smile about. Their June 2016 born bull Grahams Michael took first place in the opening class. Out of Millbrook Gingerspice, making him full brother to the Grahams winning females he was also sired by the well-known Ampertaine Elgin. He went onto win the Limousin Supreme Junior Bull championship and the overall Supreme Bull top spot. Commenting after awarding him the accolade Judge Gary Swindlehurst said that this youngster had caught his eye from the very start of the day.

The Reserve Overall Champion rosette in the bull section went to Whiskey Infinity, a four year old bull owned by a UK and South African consortium but exhibited by Mr Harry Emslie, Kinknockie, Mintlaw, Peterhead. Sired by Plumtree Deus out of Wilodge Glitzy he went on to feature in the team of four and the pair’s Interbreed championships.

The Interbreed Team Championship on Saturday 24 June was keenly contested. The Aberdeen Angus World Forum was being hosted at the show and consequently it fetched the biggest entry of Scotland’s most famous native breed seen for years. However, Judge Mr MacGregor gave the top title to the Limousin team while reserve spot went to the Angus cohort. The Limousin lineup comprised of two females from the Alfords, the reserve breed Champion, Foxhillfarm Looksthepart and Foxhillfarm Limited Edition plus Burnbank Jojo and the reserve champion bull Whiskey Infinity. Burnbank Jojo had won her class on Thursday and was the other half of the reserve champion pair’s team alongside Whiskey Infinity. Brought to Edinburgh by D & L Graham, Blairdrummond, Stirling, the February 2014 born home-bred cow is by Wilodge Fastrac out of Burnbank Bindy.

In awarding the Champion Team win to the Limousin foursome Mr MacGregor said he had been looking for a team with quality and balance throughout and the Limousin quartet had fit the bill perfectly.

In the always keenly contested Commercial Cattle section it was Mr Dermot Small from Northern Ireland, who took the reserve female title and then reserve Overall Champion with his July 2016 born heifer sired by the heavily muscled Swarland Eddie. Mr Small has been showing cattle in the UK over 20 years and in recent years has had notable success with Khaleesi, the show-stopping heifer also by Swarland Eddie.

Another Limousin success in the commercial section went to Mr James Forsyth from Mid-Bishopton. Jack Flash his 18 month old home bred bullock by Powerhouse Elite out of Fancy This won the Championship steer title.   Powerhouse Elite, sired by Objat and out of a Rocky dam is known for his conformation and width throughout his loin, characteristics that have paid off in his commercial progeny.

Rounding off the commercial side of the show was the Marks& Spencer performance recorded Championships and the ABP/ASDA steak eating contest.

In the beef breeder championship, judging the cattle entries on their commercial relevance by taking into account traditional values of conformation and scientific values of EBV data Mr Michael Robson placed the 12 month old Limousin bull Ballinloan Mountain, from Mr S L Fotheringham, Dunkeld, Perth and Kinross, as reserve champion. By Ampertaine Foreman out of Ballinloan Gaga he had been placed second in his class the day earlier.

The fantastic eating qualities of Limousin prevailed once again when a sirloin steak from a Limousin steer won the ABP/ASDA best Scottish steak competition. Taking the top honour was Bill Nelson from West Brackley, Monike, for a steak from a steer which weighed in at 349.9kg deadweight with a R+3= grading.