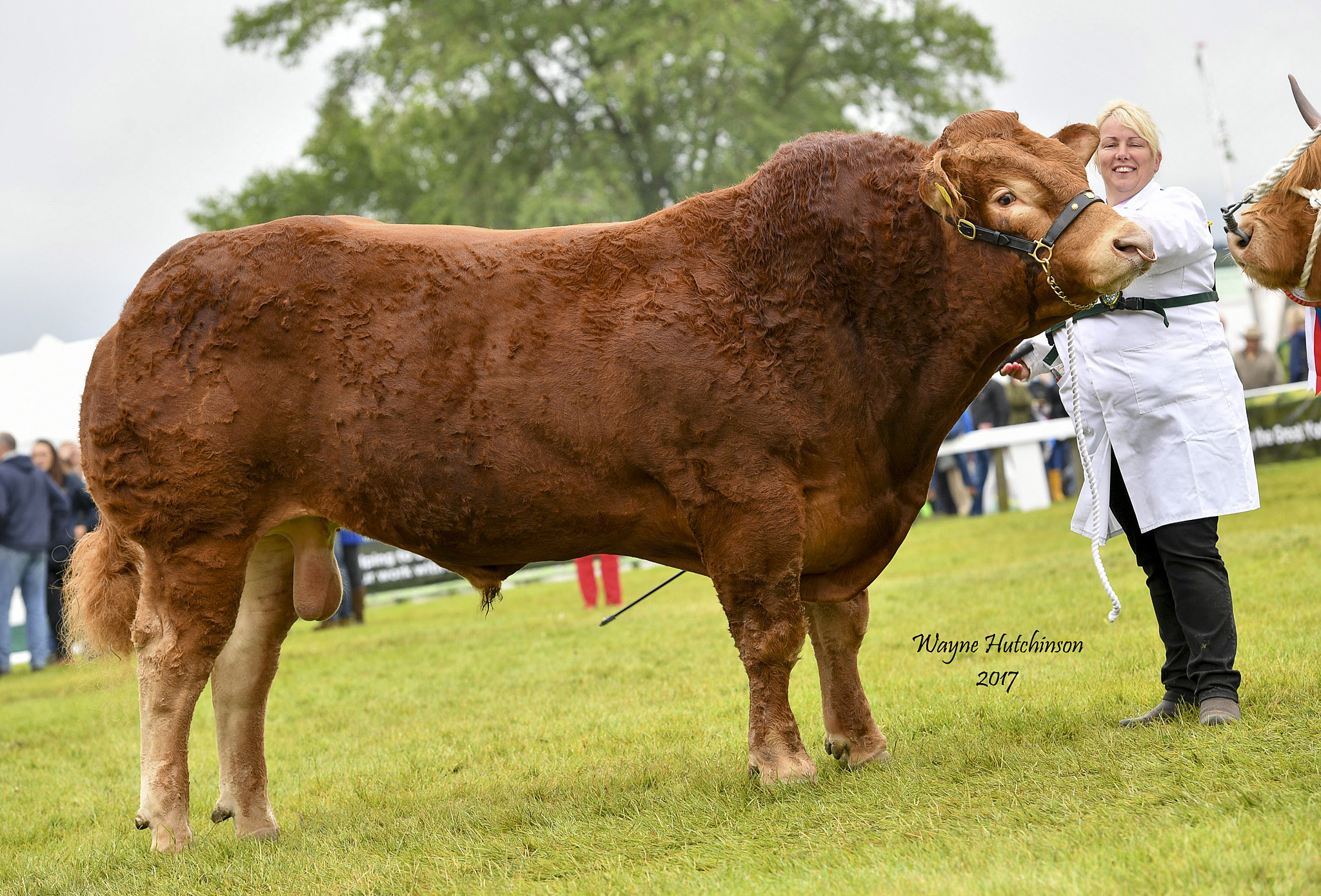 In what turned out to be changeable weather conditions, the quality of the Limousin cattle exhibited at the Great Yorkshire Show at Harrogate on 11th and 12th July proved to be consistently impressive and Limousin cattle took a haul of interbreed titles. The first day of judging saw some challenging weather conditions and it fell to Judge James Hazard from the Mereside Limousin herd based at Skillington in Lincolnshire to get a soaking as he evaluated the cattle during the morning.

Foxhillfarm Lordofthering scooped the Limousin Overall Supreme Championship on his way to take reserve spot in the Beef Individual Interbreed Championship later in the afternoon when he was put before Judge Mr McMillan from Brechin, Angus. The May 2015 bull, bred by Mr and Mrs M Alford of Cullompton, Devon is now owned in partnership with Mr D Sawrij of the Swalesmoor Herd at Kedzlie Farm, Lauderdale. Previously described as a standout bull with presence and style he came into the ring very well balanced and walking well. Bred out of the prolific Bankdale Alice, a Sympa daughter, whose offspring have collectively amassed a significant six figure value, Lordofthering made his mark on the summer show circuit in 2016 as well. He stood as junior and male champion at the Highland Show last year, inter-breed champion at Devon County, and junior champion and reserve male at the National Show.

The following day, just as the sun was starting to make its presence felt, Judge Mr G Scott from Linlithgow, West Lothian awarded Foxhillfarm Mammamia the Junior Interbreed Championship. She had been placed as the Limousin Female Champion and Reserve Overall Champion the day earlier. Having reigned supreme at the Royal Highland Show just a few weeks ago 2017 looks to be shaping up to be an incredible year for the young heifer. Mr Scott commented that her length, width and character put her way ahead of anything else in the ring on the day. The January 2016 embryo born maiden heifer, brought into the ring by Mrs Alford is by their homebred 38,000gns Foxhillfarm Irishlad and out of Glenrock Illusion, the 125,000gns female world record price holder. She went through the ring at Carlisle in May for 42,000gns, with the Alfords selling her on the basis that they would show her over the summer season. As a calf, Mammamia was Junior Limousin Champion and Reserve Interbreed Champion at the ‘Stars of the Future’ show in November last year.

Standing Reserve Female Limousin Champion in Harrogate was Brockhurst Little Gem from W J & M Mash from Chesham, Bucks. The January 2015 born heifer is also following her success at the Royal Highland Show where she took first spot in the class for females between two and three years of age. By Wilodge Vantastic she is out of Ronick McAinsie. Brockhurst Little Gem was runner up in her class at last year’s Great Yorkshire Show; she is half-sister to Brockhurst Heavenly who scooped the Limousin Overall Supreme Championship and the Interbreed Championship at the show last year.

Mr Hazard awarded the Reserve Male Limousin Champion award to Grahams Michael, another winner from the Highland Show. The June 2016 born bull from R & J Graham took the Limousin Supreme Junior Bull championship and the overall Supreme Bull top spot at Ingleston just a few weeks ago. Out of Millbrook Gingerspice he was sired by the well-known Ampertaine Elgin.

As the morning of the second day of judging progressed the crowd by the cattle ring started to feel the sunshine. As if by magic this coincided with a powerful display of Limousin cattle breeding in the Interbreed group competitions. In the senior class, the Limousin entry of Foxhillfarm Lordofthering, Whinfellpark Glittered, Foxhillfarm Mammamia and Whinfellpark Lavender took championship spot. Messrs. Jenkinsons April 2011 born cow Whinfellpark Glittered had won her class the day earlier ahead of last year’s Interbreed champion Brockhurst Heavenly. Glittered, by Wilodge Cerberus and out of Grange Orleans, has an enviable show record, most recently taking the senior female class at the Highland this year. The 2011 born cow by the herd stock sire Wilodge Cerberus, Whinfellpark Glittered is out of Grange Orleans a cow purchased from an on-farm production sale from the herd of George Smith, Daventry, Northants. She was Supreme Champion Limousin at last year’s Highland and reserve overall supreme at the National show. The April 2015 born Lavender is by the 26,000gns Gorrycam Hazzard and is out of the Lowerffryd Empire daughter Whinfellpark Holly. Judge Gavin Scott described the team as the most evenly matched team of the day.

A spectacular quartet from the Foxhillfarm cohort came into the ring to challenge for the Interbreed Junior group honors. Mammamia, Miss World, Limited Edition and Looksthepart looked nothing short of magnificent in the sunshine. Along with her stable mate Mammamia, the January 2016 born Foxhillfarm Miss World sold in the ring at Carlisle in May on the proviso that she would be retained by the Alfords for showing over the summer. Similarly-bred to Mammamia, this stylish heifer is an embryo calf out of Glenrock Illusion and by Foxhillfarm Irishlad she has growth EBVs and a beef value in the top 1% of the breed.

Foxhillfarm Looksthepart was reserve female Champion and reserve overall Limousin Champion at the Highland Show in June. Also home bred, the August 2015 born heifer is by Guards Boomer out of the multi-award winning Foxhillfarm Gracie, who was breed champion at the Highland show and the Royal Welsh back in 2013. Looksthepart was the reserve junior female at the Royal Welsh last year and in what is turning out to be a successful show career this year she was reserve breed champion at the Royal Cornwall show, only giving way to her stable mate Foxhillfarm Limited Edition. In tapping this team forward Judge Mr Scott described it as an “absolutely tremendous foursome”, he went onto say that “their width, length and depth is what every commercial producer wants”.

The ‘dynamic duo’ of Lordofthering and Mammamia came into the ring to challenge for the Blythewood Continental Beef Pairs competition, a special class originally introduced to celebrate the 150th Royal Yorkshire Show almost 30 years ago. Final judging took place in the Main Ring at the same time as the Grand Parade and to the clear delight of the Alford family Judge Mr Scott tapped the Foxhillfarm duo into top spot.