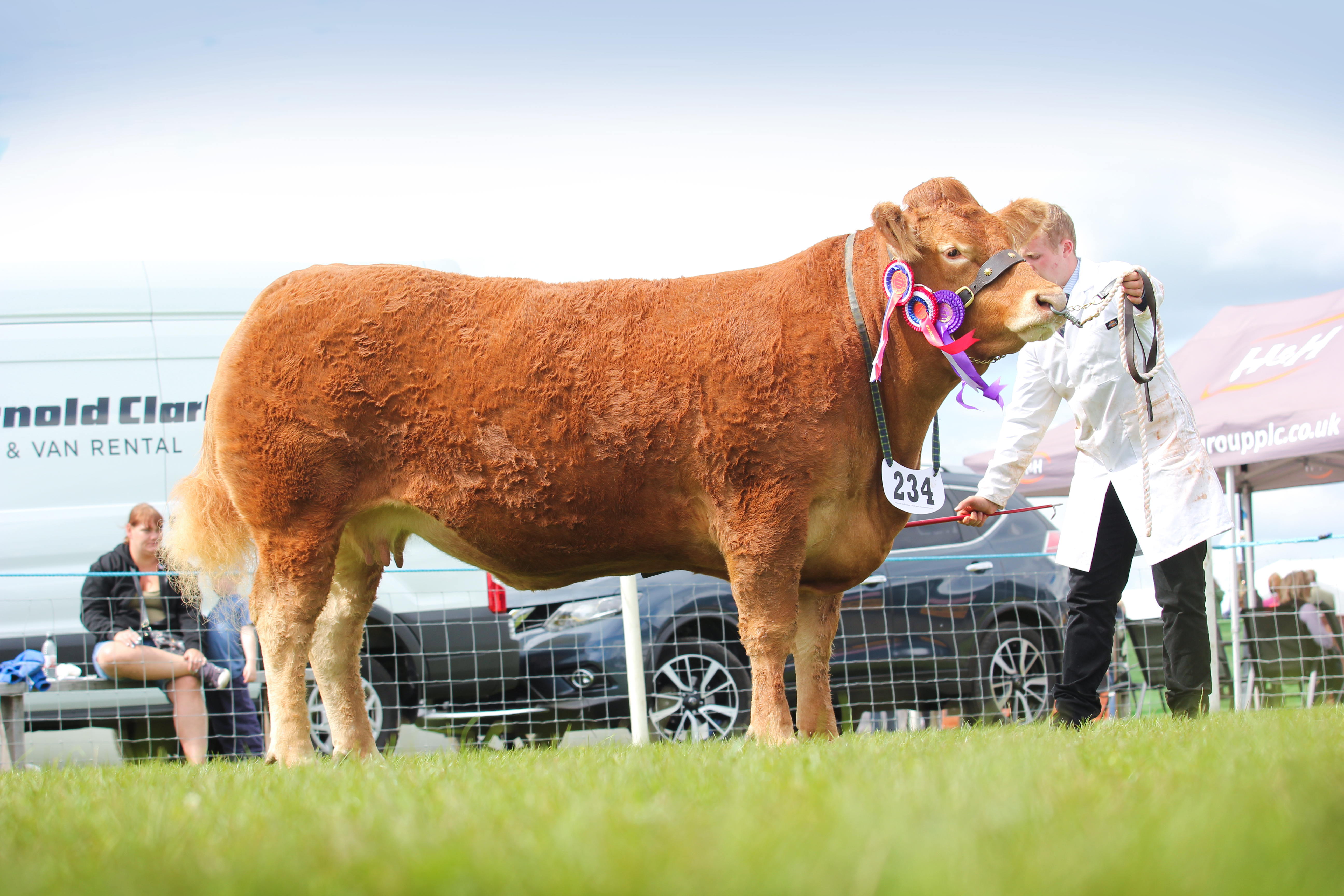 The fifth Scottish Limousin Grand Prix was held at Dumfries Show on the 5th August 2017.  Attracting forty two of the cream of Limousin breeding from Scotland, and the north of England, the popularity of this fast establishing annual event continues to grow.

Placing this year’s outstanding assembly of Limousins was Richard Bartle, the Farm Manager at Dinmore Estate, Hereford. His Supreme Overall Champion was the highly admired Burnbank JoJo from the Graham family, Dougie, Lynda, John and James, Mains of Burnbank, Blair Drummond.  Jojo, a three-year-old cow by Wilodge Fastrac out of Burnbank Bindy, was shown with her heifer calf at foot Burnbank Miss Ellie sired by the 45,000gns Ampertaine Jamboree. By the noted Wilodge Vantastic, Jojo’s sire Fastrac, who had an impressive show career himself, is out of the Sympa daughter Hazelhead Annie.

Confirming a fantastic day, Jojo followed through by winning the Dumfries Show Individual Interbreed Championship. Winning the Grand Prix was the icing on the Graham’s 2017 show season with Jojo already having taken a first prize at the Royal Highland Show and being part of the Champion Interbreed Team of Four, Interbreed Champion at Gargunnock, Champion of Champions at Doune and Dunblane show, and Champion and Reserve Interbreed at Braco show.

Standing Reserve Champion, Reserve Female Champion, and Junior Female Champion on the day Grahams Melody a yearling heifer from R&J Graham, Bridge of Allan, Stirling. An embryo calf by Ampertaine Elgin Melody is out of the highly successful Millbrook Ginger Spice. Also by Wilodge Vantastic and out of Millbrook Baby, Ginger Spice made history at the Balmoral Show in 2012 by becoming the first Junior Interbreed Champion to go on to win the Overall Interbreed title. She returned to Balmoral again in 2013 and 2014, claiming the Individual Interbreed crown on each occasion. In doing so in 2014 she made history yet again as the only animal to secure the title three years on the trot.

After the judging Mr Bartle said of his Champions “Jojo is an excellent example of a working cow suckling a good calf and showing excellent fleshing, good mobility and with a very feminine character. I was also very impressed with the Reserve Champion Grahams Melody, a young heifer who is extremely stylish and for a young beast very well fleshed. The overall quality of the stock before me today was impressive and I would like to thank the exhibitors bringing them out.”

Reserve Male champion, on his first time out, was Wilodge LJ, a Gerrygullinane Glen son out of the noted Wilodge Gem from Mr B Goldie, Townfoot, Dumfries. Purchased privately by the Goldies Herd earlier this year from breeder Christine Williams, LJ has an outstanding dam and maternal pedigree line in Wilodge Gem, who within the Wilodge Herd vies with her full sister Wilodge Diamante, for the herd’s top homebred female accolade. Gerrygullinane Glen was also the sire of the Champion Limousin at the Society’s May Sale at Carlisle, Wilodge Lookout who sold for 60,000gns.

Reserve Senior Female Champion was Powerful Kango, a daughter of the Sympa son Haltcliffe Dancer out of Liscarn Fantastic from Mr G Hendry, Heads of Auchinderran, Keith, Banff-shire. Kango, who won her class at the 2016 National Limousin Show, went onto take reserve champion position at the Keith Show in the North East of Scotland just two days after her success in Dumfries.   Another animal from the Republic of Ireland the 2015 born Powerful Kango was bred by Philip Crowe, Carrigan, Co Cavan.  Reserve Junior Female Champion was Maraiscote Mistique from the Nimmo family, Bogside Farm, Newmains, Wishaw, North Lanarkshire. By the Rocky son Macschoice Chris, the May 2016 born Mistique is out of the Goldies Comet daughter Maraiscote Gucci.