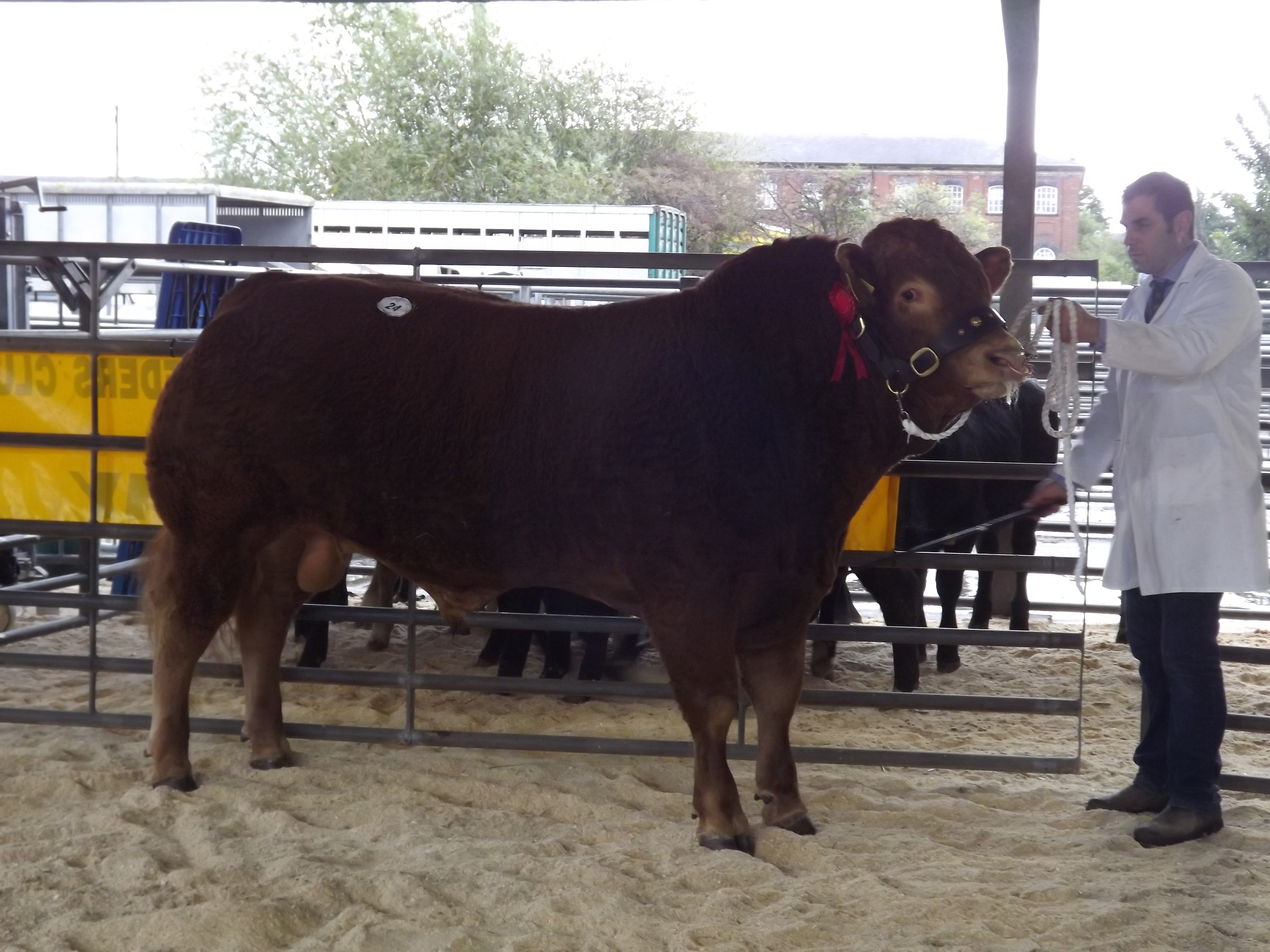 It was a day for the boys at the Autumn Limousin Day sale at Newark on Saturday (7 October), held on behalf of the East Midlands Limousin Club with the pick of the prices paid for bulls.

Topping the day at 7,000gns was the March 2016 born bull Scorboro Magna from Jim Blooms herd, Driffield, East Yorkshire. By the imported sire Fenomen out of Scorboro Caramel, an Ionesco daughter Magna is the first Fenomen son from the Bloom family to come forward for sale through the ring. Having been genotyped for carcase and maternal trait GEBV’s and with an EBV beef value of 55 he generated solid attention ringside as he was knocked down to D A Bailey & Son, Cropper Farm, Ashbourne as a new stock bull for their Rushton Herd. Alan Bailey was clearly delighted to have taken him home, commenting a couple of days after the sale he said “what a tremendous bull he is, such a perfect gentleman, he has settled in very well already”.

Second best of the day at 5,000gns was the two year old Calogale Lord from G J Lee & C M Lloyd all the way from Carmarthenshire, the pre-sale Overall Champion. Described as a big, powerful, muscular bull with tremendous length this Dinmore Goldeneye son is out of Baileys Countess, a Ronick Hawk daughter. Taking him home was the Hamplett family, Booden Grange, Stafford to work with dad Simon’s Petersfield Herd and son Will’s Booden Herd.

Then at 4,900gns was Cockleshell Luckystar from the Gascoine Group Ltd. A natural calf bred by Mr Pitcher, Ivy House Farm, Boston, Linconshire by the Ampertaine Commander son Mereside Hannibal out of Cockleshell Hunice he was knocked down to R G & J R H Holmes, Manor Farm, Ratcliffe on Soar, Notts.

Following him was another local bull, this time Gentrys Midnight from Newark auctioneer Paul Gentry, made 3,600gns. This Fieldson Beefy son is out of Gentrys Itsagirl, a Togherdoo Expert daughter. He was sold to Gary Sharp, Fristling Hall Farms, Stock, Essex.

Leading the female trade at 3,500gns was maiden heifer Blackfriar Melia from Mike and Will Morton. This Gerrygullinane Glen daughter, who had been tapped out as the female champion in the pre-sale show, is out of the Cloughhead Umpire daughter Blackfriar Emelia and sold to A Smith and Son, Selston, Nottinghamshire.

The same vendor and buyer combination then saw Blackfriar Misty trade at 3,000gns. This one is also by Glen and is out of the Wilodge Vantastic daughter Goldies Fifi.

Trading at 2,350gns was the best of the cow and calf outfits on the day, Bosworth Frollic from Simon Tysoe. She is sired by Wilodge Vontrapp and out of Bosworth Valentine, a Wilodge Rookie daughter. She sold with two calves at foot, one an unregistered bull calf by Emslies Gallieo and the other a heifer calf. Buying her was Gary Sharp, Fristling Hall Farms, Stock, Essex.

Then at 2,000gns was Ian Brown’s Lowgate Jessie, a first calver sold with her heifer calf at foot by Bolide, Lowgate Nancy. This one is by Sportsmans Ferguson and out of Lowgate Esmerelda, a Wilodge Visa daughter. She went home with G and S Gilleard, Thorne, Doncaster.

Another maiden heifer, Corridan Lucky from Corridan Farms then traded at 1,900gns. Sired by Corridan Hugo she is out of Dorridan Diana, a Kype Orkney daughter and sold to K M and C W Jones.

Sticking with the maiden heifers next best was a call of 1,700gns was for Confluence Mimi from A and G Ogg. She is by Coachhouse Hector and out of Rachels Ali, a Pennys Nimrod daughter. This one was knocked down to Simon Hamplett. 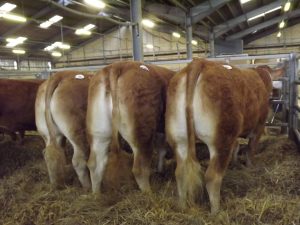