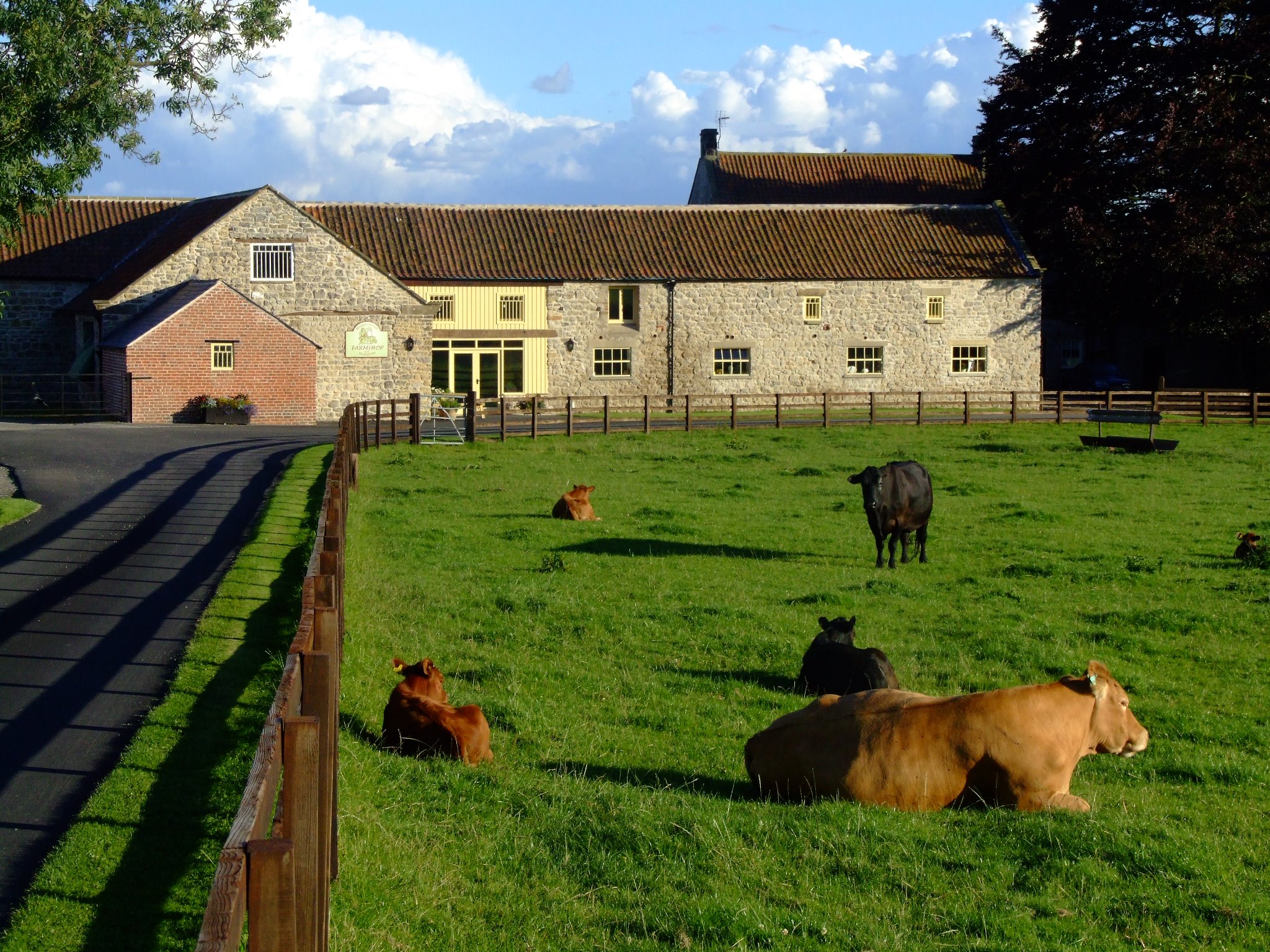 Here we feature Mark and Jenny Rooke and their growing and successful farm enterprise at Beadlam Grange in North Yorkshire.  The Limousin breed is of course playing a central part in the Rooke’s ‘commitment to quality’.

“Committed to Quality’, the three words underlying the ethos at Beadlam Grange in North Yorkshire where Mark and Jenny Rooke together with their daughter, son and daughter-in-law farm a commercial suckler herd as well as run a successful farm shop and restaurant-cum-tea room business.

A herd of home bred Limousin cross cattle is the cornerstone which underpins the prosperous farm enterprise which delivers the family’s desire to maximise the value of what they produce, become as self- sufficient as possible and look after the farm’s environment preserving it for future generations. 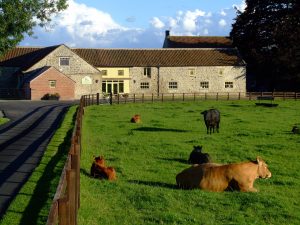 While the position of Beadlam Grange alongside the A170 main route to Scarborough has proved to be ideal for a farm shop, butchery and restaurant, Mark and Jenny are without doubt that the commitment to quality they are able to provide to customers is a direct result of the cattle they rear and is a fundamental driver of the success at the multi-award winning operation. The homebred Limousin beef sold through the farmshop and restaurant is produced entirely from the farm’s grassland and barley crops. As customers meander through the business this passion for the quality of the product they are producing radiates through Mark and Jenny who are both very much hands on in the business. 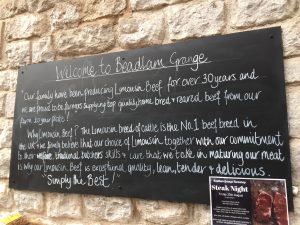 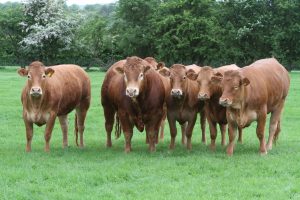 Whilst Mark and Jenny were always aware of their location, and the possible benefits from making the farm more than an agricultural enterprise, it was the purchase of Beadlam Grange that proved the catalyst for the business as it is today. Mark explains: “When we had the opportunity to buy the farm in 2000 we had to borrow heavily and we quickly realised that farming on its own wasn’t going to take us where we wanted to be. We knew that we needed to do something else”. He added, “We have had suckler cows since the early 1980s and we felt strongly that the Limousin beef we have been producing over the years was actually a specialist product and far more deserving than simply selling it deadweight into a supermarket”. However, it wasn’t until 2007, following the gradual formulation of their plans over many years, and particularly spurred on by the foot and mouth crisis of 2001, that the vision became a reality. With the help of a Rural Enterprise Scheme Grant they were able to transform redundant Grade II Listed farm buildings into the farmshop, butchery and tearooms as it is today. 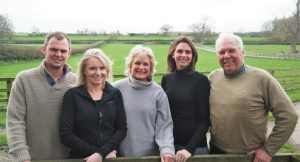 Mark came to Beadlam Grange as a six year old with his parents in 1962 when his father William took over what was then a dairy farm on the Feversham Estate as a tenant.  Beadlam Grange comprises 300 acres in a ring fence. Clamp silage is made plus third cut round bale silage. All wheat is sold and barley is fed to finishing stock with a rape meal balancer. The cows are fed a TMR of silage, straw and fodder beet over winter.

A range of other activities contribute to the sustainability of the farm business. Garden waste is composted, approximately 1,000 tons a year taken in from Ryedale District Council, not only supplying potash and soil conditioner for the land but also bringing in valuable income from the Local Authority.   Weaner pigs are reared on a bed & breakfast arrangement both inside and outside for Ian Mosey Livestock Ltd. Major financial savings are made from two biomass boilers that produce all heating and hot water for the farmshop, tearoom and farmhouse and there is also a borehole that supplies all domestic and livestock water needs. 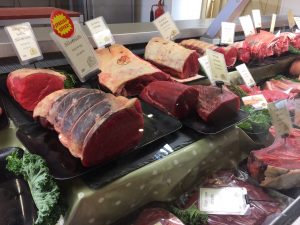 Since 2007, Mark and Peter have steadily increased their commercial herd and now have 100 Limousin cross suckler cows running with Limousin bulls producing mainly three quarter bred calves. Three Limousin bulls run with the cows, one of them is Seamer Huron, a homozygous black bull by Lyonpark Cambrai. One of Mark’s priorities when choosing a replacement bull is good length.

A BVD vaccination programme was introduced a number of years ago after random blood testing revealed incidence of the disease. Mark is certain that vaccinating the cows has brought noticeable benefits to calf health. He says “not only has calf vigour really improved since commencing the vaccination programme but there has also been a reduction in the incidences of pneumonia”

Calving is split half and half to spring and autumn given that the production objective is to ensure a steady supply of cattle which facilitate the business needs. Mark commented that “one carcase a week is required for the butchery sales and restaurant so we aim to batch the cattle into small finishing groups”. While some heifers are kept as replacements the rest along with the steers are finished at up to 22-24 months of age, either on grass during the summer or an ad-lib barley and silage ration over the winter months. Mark is happy with their production system as it means that their cattle all get two seasons at grass; he says that he likes the cattle to “mature naturally”. The cattle are taken to a local family abattoir and average 370 to 385kg deadweight. The carcases, which are delivered back to the farm, are then hung for three weeks before being butchered in house. 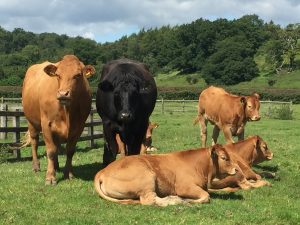 The family all feel that for their production requirements Limousin fits the bill perfectly. From an on-farm perspective Mark says “the beauty of Limousin crosses are that they don’t waste if they are not required in any particular week. We can afford for them to add a little weight without putting on excessive fat which means it is relatively easy to feed accordingly to suit our own butchery and restaurant requirements”. However, for the Rookes’ using Limousin cattle is not just about how they deliver on farm in efficiency terms, just as much emphasis is placed on what the end product provides for their customers, many of which are regular visitors.

On turning off the A170 visitors are greeted to an impressive sight. Limousin cattle chewing the cud in the fields adjacent to the driveway. Families are regularly seen up close to the cattle at the fence. Jenny in particular is proud of the positive signal this sends to customers about the origin of the meat on sale throughout the business. She says “provenance has been one of the buzz words in the meat industry in the past few years particularly since the horsegate debacle which raised issues of consumer trust. Here at Beadlam Grange from the moment they turn off the main road what we offer provides the clear traceability and transparency our customers want”.

These days food has become a hot topic . We may be firmly in the supermarket age but in the background there is a growing segment of food-savvy, environmentally aware consumers for whom ‘local’ has become very important. The Rooke’s ethos of sustainability, traceability and low food miles combined with the fact that the meat can be seen in its original form within a bull roar of the farmshop is a winning formula. What is interesting to note is that 2007 was not only the year in which the family embarked on this grand design for their business but also the start of the global financial crisis. However as the recession bit, the business still grew which may seem unexpected given the fact that at the time shops selling what could be regarded as premium products struggled to compete on price with supermarkets. However, through the butchery the farmshop has been able to offer a far wider variety of cheap cuts than supermarkets ever could, nose to tail products with a butcher on hand helping to advise the customers on the best ways of cooking the cheaper, unfamiliar cuts. As Jenny points out “we have complete control of everything we produce from the day it’s born to the day it appears in the butchery. Supermarkets just can’t compete with that”. 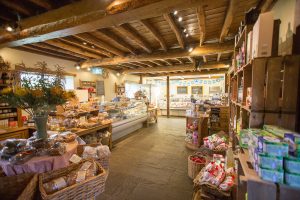 Mark and Jenny Rooke have always been ‘people friendly’. When the children were young Jenny ran bed and breakfast accommodation together with a holiday cottage for a number of years. In 2002 they opened a small Caravan & Camping Club Site and welcome campers from Easter until October every year. Beadlam Grange gives its customers a unique experience, it welcomes the public to real farming, the way you might expect on the edge of the North York Moors. It is a true ‘farm to fork’ operation and a fantastic advert for the Limousin breed showcasing how it delivers meals into households. The family is positive about the future of farming and while they have already grown a sustainable business for the next generation they are not resting on their laurels and are still full of ambition. They currently employ 22 local staff in a variety of roles and play an integral part in local community activities.

While there is a lot of things going on at Beadlam Grange, fundamental to achieving their goals there is no mistaking the fact that the farm and the cattle is at its heart. Their aim is to provide an exceptional eating and shopping experience and their commitment to quality has gained them an enviable reputation and they are justly very proud of their Limousin beef!