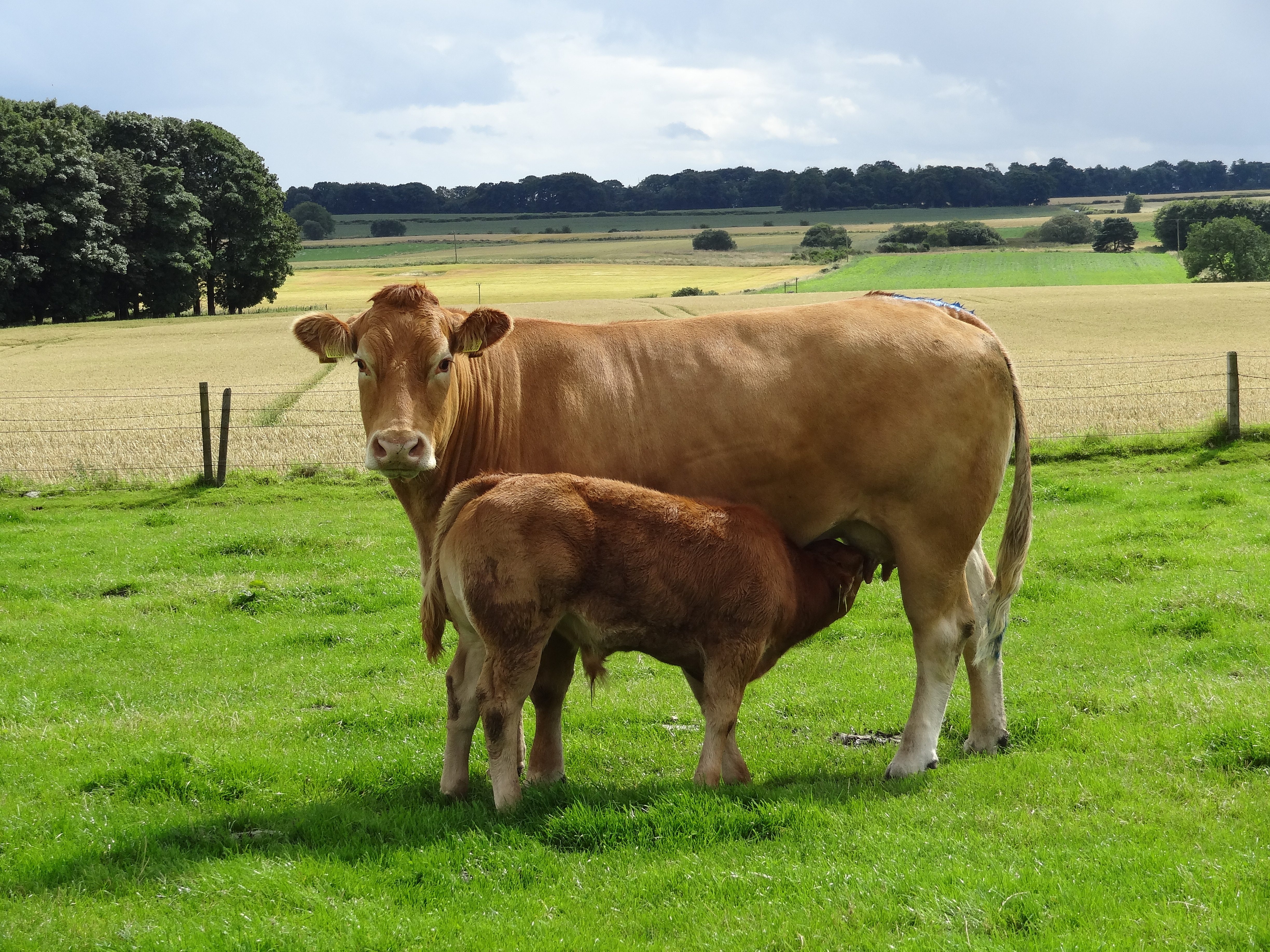 Limousin bloodlines underpin a relatively new livestock enterprise, which has become a passion for the Jack family who farm at Carriston near Glenrothes in Fife.

Originally from Ayrshire, Matt and Libby Jack came to Carriston in 1982 when the farm extended to 230 acres of arable land, all in all around 520 acres are given to the arable enterprise. Since then they have bought a further 240 acres and also rent 500 acres. Son, Matthew and his wife, Lynn are also involved in the business, while daughters, Sheena and Rhona are married with Rhona keeping a couple of her own Limousin cows on the farm. 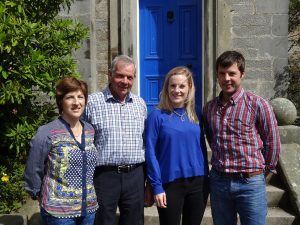 As well as growing winter wheat, spring barley, carrots and turnips, the family now grow 30 acres of beans for feeding cattle. Matthew explained, “We got the chance of some grassland to rent and I was keen to add a livestock enterprise, so it was too good an opportunity to miss.”

Matt added, “When Matthew left school in 2006 he said he was leaving unless we got some livestock! We had been finishing store cattle and were impressed by the Limousin crosses we bought in, so it was clear from the start that would be the breed for us.” He and Libby had also attended the 2004 ILC and liked the shape and easy calving traits of the cattle they saw. Matthew added, “We wanted a versatile breed from which we could breed replacements and keep a closed herd.”

The first pedigree Limousin cow and maiden heifer arrived in 2006, bought privately from Robert Graham at Bridge of Allan. Graham’s Saffron was in-calf and produced the fledgling Kingdom herd’s first bull for sale; Kingdom Bono, which made 4500gns at Carlisle. The maiden heifer, Grahams Vanessa was flushed to Willodge Vantastic and produced what is now their senior stock bull, Kingdom Fabio, 10th in the Limousin Cattle Society’s leading carcase trait sires. 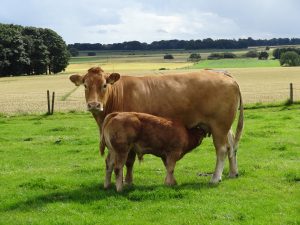 After buying some cross cows for the embryo transfer enterprise, Libby said they decided to keep those which did not take and bull them and this was the start of the commercial herd. The herd now numbers 148 spring calving cows and 24 autumn calvers, including the 12 pedigrees, which are run commercially.

There is also a flock of 400 ewes which complement the cattle grazing, and, having been bitten by the pedigree bug, Matthew has 40 pedigree Texel’s as well as Scotch Mules and Texel cross ewes. Lambs are all finished and some store lambs bought in and finished for the Christmas market too. Around 20 Texel shearlings are sold at Stirling each year. Matt admits he has nothing to do with the sheep but Matthew, Lynn and Libby are keen, and because of spring arable work, Libby is very hands on at lambing.

She said, “This was another reason for choosing Limousin cattle. With the men busy in the fields in the spring I am often left to deal with calving, so we wanted a breed that just got on with it and didn’t need a lot of help – the Limousin fits the bill.” 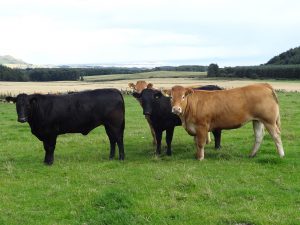 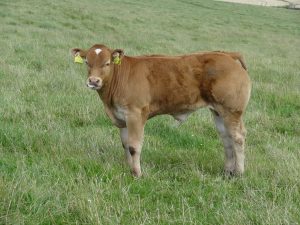 Lynn, who works in nearby Cupar, is doing her accountancy exams, but is very keen on the cattle and helps out whenever she can. Apart from family, the farm employs one full-time tractorman, Ian Rutherford, who has been with the family for 27 years. They also employ a student for harvest.

Bulls are only turned out with the cows for ten weeks to try to keep a compact calving period and anything which slips will only join the small autumn herd if she is good enough. Matthew pointed out that this year 85% calved in the first seven weeks including heifers.

He and Libby have an ongoing discussion about whether heifers should calve down at two or three year-old but the compromise they have come to is that if they look mature and their body weight is 480 to 500kg they will go to the bull. Matthew said, “This is the problem with mainly spring calving, ideally they would be two-and-a-half and retained from an autumn herd, but, because of cereal and vegetable harvest, we have to keep the back-end calvers to a minimum.”

Cows are housed around November 1st and mostly calve inside with the last few calving outdoors. Calves are offered creep feed throughout the summer, with bulls left entire, and are weaned at housing, when they go onto a ration of ad lib home-grown barley, beans, minerals and molasses with access to straw and vegetable waste.

The target is for them to put on an average 400kg deadweight in 400 days, which the Jacks are getting pretty close to. Daily liveweight gains from birth to killing for the bulls are around 1.8kg per day. 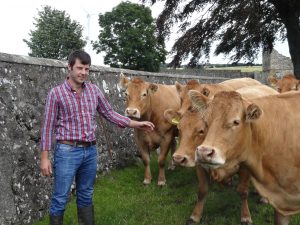 Bulls are sold to ABP, Perth at 12 to 15 months and last year their average deadweight at an average age of 13 months was 390kg.

Heifers are over-wintered on ad lib silage with a small amount of barley to encourage them to grow on and develop bigger frames. At a year old potential breeders are selected and the whole batch goes onto the same ad lib diet as the bulls, finishing at around 16 months averaging 360kg deadweight. Nearly all go to ABP but anything with particularly good fat cover will be snapped up by butchers at Caledonian Marts, Stirling.

Results at the abattoir are good, with 50% of the cattle sold through ABP grading U, 30% R and 20% E. Bulls regularly kill out at over 60% and heifers at nearly 60% meaning there is very little waste.

All the home-bred cattle are electronically tagged and the next step is to install automatic tag readers on the Big8 cattle crush and weigh crate which will record information. At the moment Matthew notes calving and fertility or feet problems and also poor milkers and does not retain heifers from these cows, but he hopes that now the herd is roughly the size he wants, he can start being more selective in keeping heifers.

He said, “A three-quarter Limousin is my ideal suckler cow, and not too heavy, around 650kg mature weight is fine, so we can achieve our target weaning weights of 50% of the cows body weight. Our biggest aim remains to get calves sold as quickly as possible, ideally bulls at 13 months and heifers at 15 months so we rely more on grass and less on hard feeding.” 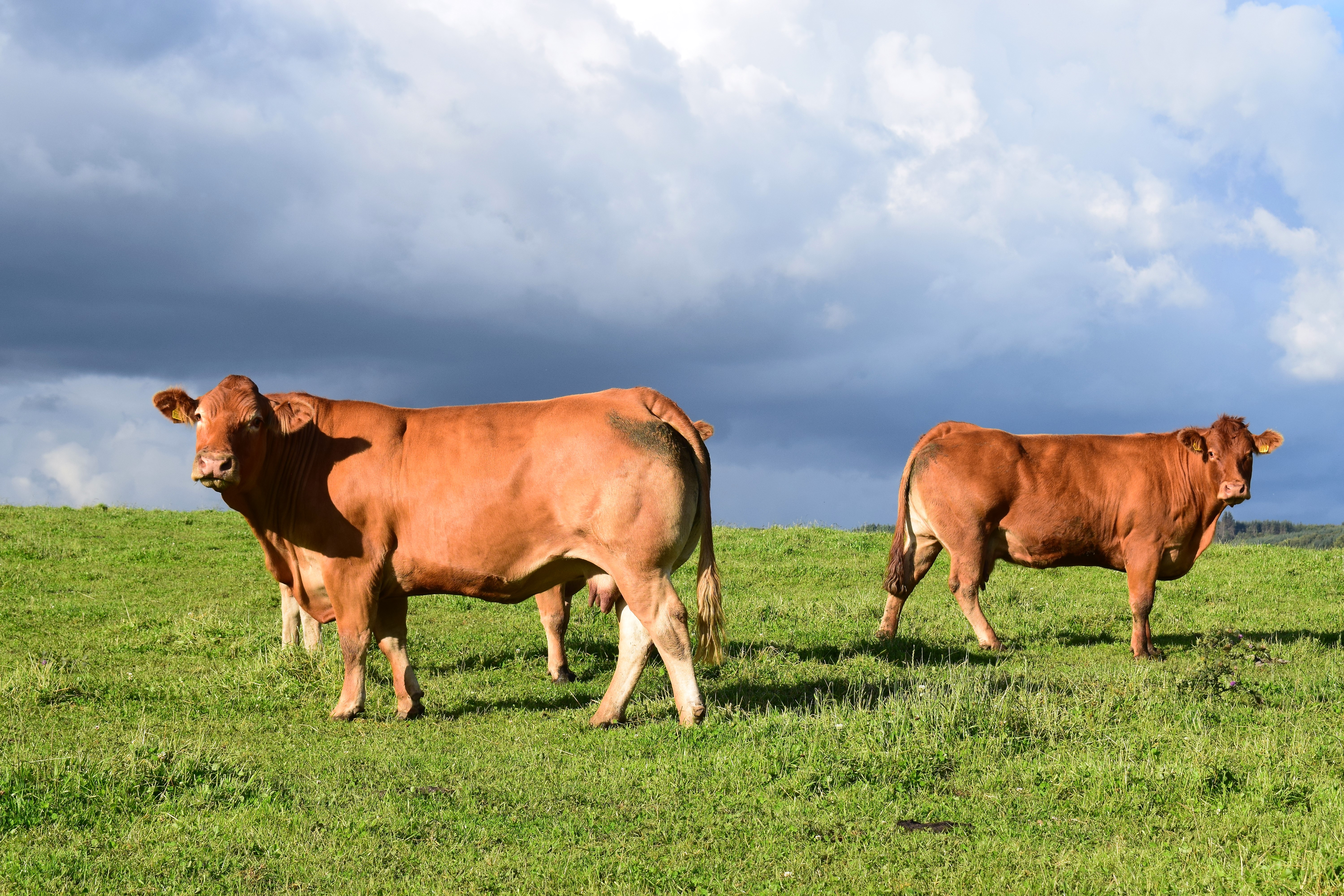 The Jacks work closely with their local vet practice which scans heifer’s pelvises at 15 months to reduce calving problems. The herd is also in SAC’s Hi Health Scheme and is monitored for Johnes, vaccinated for BVD and Leptospirosis.

Two years ago the family erected a 100kw windmill at Carriston, which provides power for the farm and both houses, while two-thirds is sold back to the grid. The boys reckon it will have paid for itself in another five years and should hopefully prove to be a good investment

The family is positive about the future of farming and believe they have the right mix of enterprises to survive whatever the future may bring. Matt said, “We do not know what the future holds but we reckon we have spread our risks and we are confident we have the right breed for producing top quality beef.”