Under Judge Mr J Taylor, Easter Ochtermuthill, the heifer had been awarded the Reserve Champion spot and had taken the Scottish Limousin Clubs Salver for best Limousin calf.

Overall, 703 bullocks went through the ring to average 239.28p/kg, up almost 9p on the year earlier. Selling to a high of 290p/kg was a 369kg Limousin-cross which also came from John Robertson & Co.

Winner of the British Limousin Cattle Society sponsorship voucher for the best pen of four was Ballechin Farms. 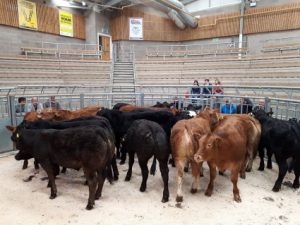