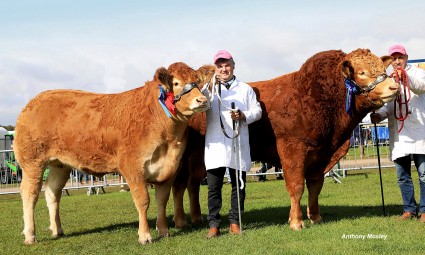 In what was a terrific achievement, two animals from different exhibitors teamed up to win the Blue Riband Burke Trophy for the Limousin breed on the second day of the Royal County of Berkshire show held at Newbury Showground 16/17 September 2017. The Burke Trophy, a highlight at the Royal Show between 1951 and 2009, has since moved around the country to different shows to be presented to the best pair of beef animals – one male and one female – chosen out of all the breed classes at the event.

The beef Judge, Mr Alasdair Houston; a well-known farmer and cattle breeder from the County of Dumfries, placed the Limousin pair as winners of the prestigious award. The team, Brockhurst Littlegem from W J & M Mash Ltd, Chesham and Dinmore Lionheart from Paul Dawes Herefordshire-based Dinmore herd complimented each other well in the ring. The pair, which had been selected from a strong cohort of Limousin cattle exhibits, are both no strangers to show success; however, winning such a notable accolade is a tremendous credit to the breeders and an important vehicle for promotion of the breed.

Amid triumphs at many county shows over the summer, including Reserve Limousin Champion at Newbury, Littlegem stood as Reserve Female Limousin Champion at the Great Yorkshire Show earlier this year and took first place in her class at the Royal Highland Show back in May. The January 2015 born heifer by Wilodge Vantastic out of Ronick McAinsie is half-sister to Brockhurst Heavenly who scooped the Limousin Overall Supreme Championship and the Interbreed Championship at the 2016 Great Yorkshire Show.

The April 2015 born bull Dinmore Lionheart, had been tapped into Limousin Champion spot at Newbury by Judge Stuart Renton, Duns, Berwickshire. The Requin son out of Dinmore Caprice won the South Wales and Mid-West Limousin Club’s ‘Stars of the Future’ competition at Brecon in August 2016 before coming out top of the shows six-breed cattle Supreme Championship line-up. As with Little Gem, Lionheart has had a very successful summer in the show ring racking up a string of rosettes. One of many victories, he was Interbreed Beef Champion at the Royal Three Counties Show where Judge Colin Hutchins described him as a “great example of a modern Limousin”.