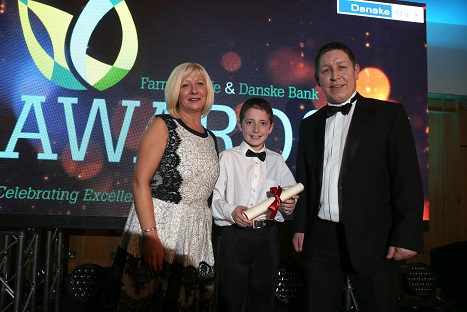 Northern Ireland’s farming industry was in the spotlight on Thursday 19 October as the winners of the annual Farming Life and Danske Bank awards were revealed. Around 300 industry figures, farmers and politicians attended the black tie event at the La Mon Country House Hotel, in the Castlereagh Hills.

Stepping up onto the stage to receive a Special Award for Commendation as a young farmer for his achievements was Young Limousin Breeders Club member Kile Diamond of the Pointhouse Herd, Carvagh, Coleraine.

Head of Agriculture at Danske Bank, Robert McCullough described the farming industry as the heartbeat of rural Ulster, ‘in the DNA of virtually everyone in the room and is recognized across the world for the quality and integrity of its produce and the innovation of its people’. It is a tremendous honor for Kile to be recognized with an award at such a high profile event. Despite his young years Kile is already turning into a hardworking ambassador for the breed in Northern Ireland and further afield.

Kile received his award from Martine Lafferty from Farming Life and Rodney Brown from Danske Bank.