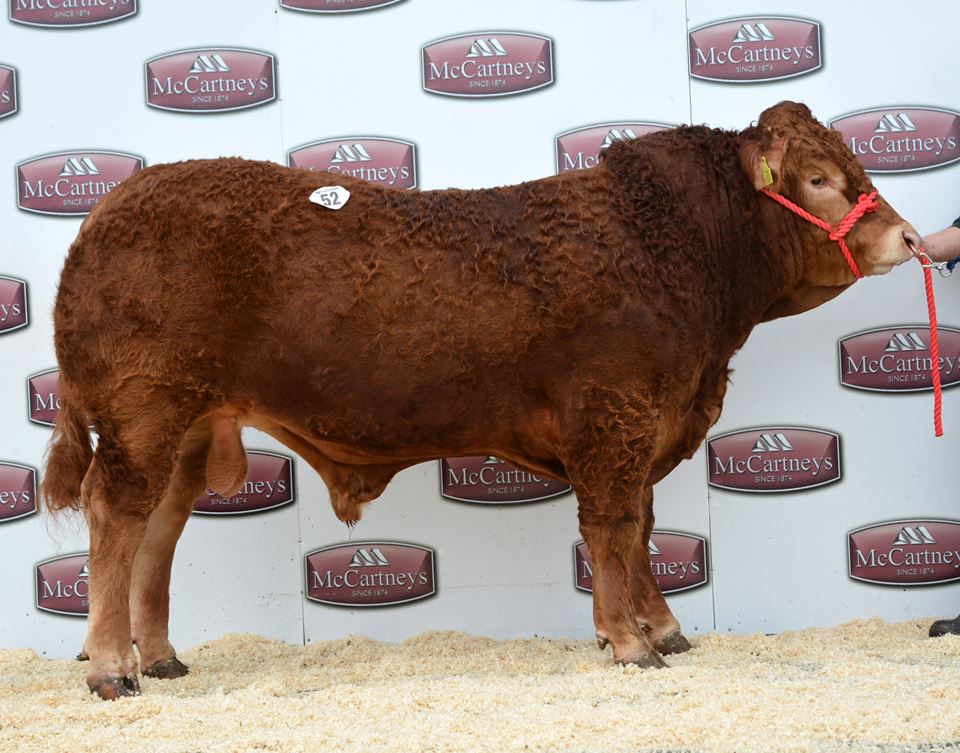 The July 2016 born bull by Chatsworth Jojo and out of Wellhouse Ginny was the youngest on offer on the day. Described as a bull with ‘superb growth and extreme depth of muscling’ Wellhouse Merry carried excellent performance figures across the board. Paying the top price was JIH Jones & Son who run a commercial suckler herd at Erw Gilfach Ltd, Builth Wells.

This end of year fixture saw 22 bulls sell from the 29 forward to average £3856 with both figures very much in line with the corresponding 2016 sale. Four bulls in the day made 5000gns and over.

Selling at 5100gns was Glencross McMaster from Mrs C Davies, Glanyfer, Crosswell, Pembrokeshire. Shown successfully through 2017 this March 2016 born bull is entirely homebred being by Glencross Incredibull and out of Glencross Furious. Purchasing this bull was DB Davies, Eisteddfa Fawr, Brynberian, Crymych, Pembs.

Killerton Mallachite from Mr & Mrs PW & SM Greed, Columbjohn Farm Ltd, Exeter, Devon made 5000gns when selling to E & HM Jones, Aberbranddu, Pumpsaint, Carmarthenshire. Another bull to have strong performance figures, Malachite is by Loosebeare Exmoor, a Haltcliffe Anzac son, and is out of Killerton Emerald. Earlier, Killerton Mo, another from the Greeds, made 3700gns when selling to SC Jones, Woundale Farm, Bridgnorth, Shropshire.

Also at 5000gns was Nealford Minister from Mr JH Neale & Son, Wilkie Down, Launceston, Cornwall. April 2016 born this bull is by Glenrock Fortune and is out of Nealford Henella. Nealford Minster was bought by G Morgan for his 75 cow suckler herd at Bronglyn, Llanfynydd, Carmarthen.

Earlier in the sale Nealford Monarch, another from the Neales, made 4700gns when selling to MG Jones, Caeronen, Three Cocks, Brecon. This June 2016 born bull was the first son to be offered at sale by the herd’s 16,000gns stock bull Ampertaine Inferno. Out of Nealford Goldilocks, Nealford Monarch arrived at Brecon with a strong show record which included being Breed Champion and Interbreed Champion at Okehampton and Holsworthy Shows respectively. In the week prior to the sale he had lifted the Continental Bull of the Year Interbreed title at the Agri Fest event held in Exeter. At the pre-sale show at Brecon the judge Nick Hill of the noted Quaish herd, Decoy Pool Farm, Cheddar, Somerset, had tapped out Nealford Monarch as his Junior and Supreme Champion. Commenting Mr Hill said: “I was looking for presence, length, stretch, and a good top line. Excellent locomotion was also very important. This bull had all of that and was a worthy Champion.” Regular consignors at the Brecon Sale fixture, this was the first pre-sale Championship the Neales had secured.

Making it a Championship one, two, for the Nealford herd, the April 2016 born Nealford Major lifted the Senior Championship and the Overall Reserve Championship. This bull is a son of Procters Cavalier and is out of the top breeding female Nealford Rapunzel who has previously bred Nealford Impecabull the Signet Beefbreeder Interbreed Champion at the Royal Welsh Show. Purchasing Nealford Major was DH & A Jenkins, Cathal, Cwrtnewydd, Llanbydder, Ceredigion.

From a small sale of females the top price was the 2600gns for the July born first calver Deri Jinja from Mr & Mrs TB Griffiths, Brynderi, Carmarthen, who was sold with her Jinz sired bull calf, Deri Nero, at foot. Deri Jinja is by Dinmore Gameboy and out of Deri Ginger. The purchaser was JJ Butler, Symons Trewen, Whitchurch, Ross-on-Wye.