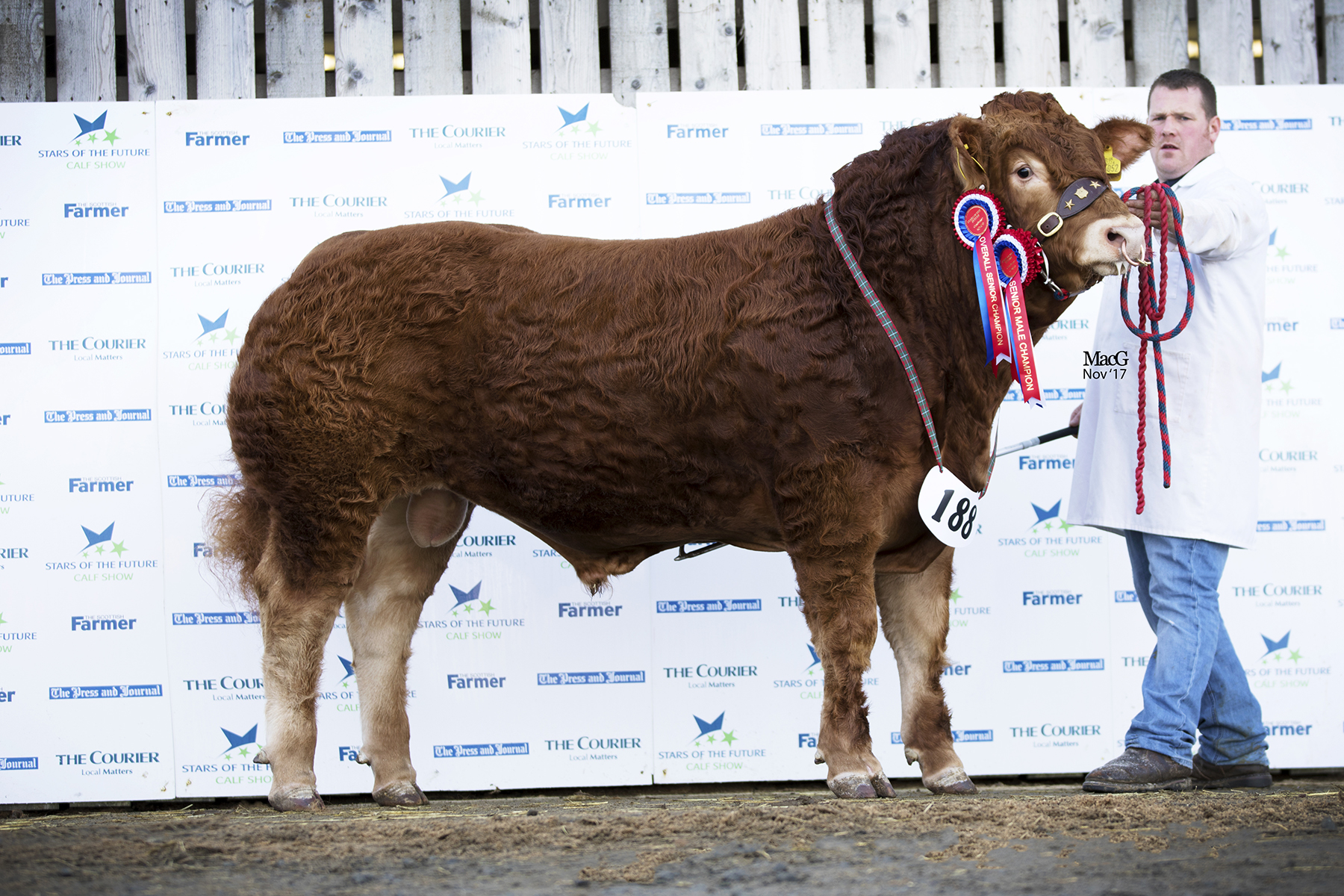 Now in its eighth year, the Stars of the Future Calf Show, held on Saturday 11th November 2017 at United Auctions, Stirling, saw a fantastic entry of calves across all breeds. In front of a large crowd of spectators, once again, Limousins led the way in the Interbreed accolades. Judge Mr Jim Goldie, Townfoot, Dumfries and Galloway, placed Limousins as the Senior and Junior Interbreed Champions and winners of the Joe Watson Memorial Pairs Competition.

From a strong line up of cattle Mr Goldie placed Aultside Meanmachine from Garry Patterson, Upper Forgie, Aultmore, Keith, as the Senior Interbreed. The August 2016 born Meanmachine is by the 50,000gns Wilodge Cerberus and is out of Spittalton Flush. A Hargill Blaze daughter. In the junior section, Mr Goldie tapped out Grahams Natalie from R & J Graham, Bridge of Allan, Stirling, as the Junior Interbreed Champion. The January 2017 born heifer Natalie is a daughter of the Wilodge Vantastic son Claragh Franco and is out of one the noted Grahams home-bred cow Grahams Coffee. An embryo calf Grahams Natalie is the same way bred as the 40,000gns bull Grahams Lorenzo.

The Graham family went onto make it an illustrious Interbreed hat-trick of titles for the Limousin breed by taking the Joe Watson Continental Pairs Championship. The Junior Interbreed Champion Grahams Natalie teamed up with her stablemate and full embryo brother Grahams Nashville.

All the way from Devon, Mike & Melanie Alford, Foxhill Farm, Cullompton, took the Senior Female Championship with Foxhillfarm Madonna who then stood as Reserve in the Overall Senior Championship to Aultside Meanmachine. The September 2016 born heifer came to Stirling with a fine pedigree. She is sired by the world record 147,000gns Trueman Jagger and out of the Bankdale Alice daughter Bankdale Elizabeth. Bankdale Alice is a prolific breeder of high profile, and high priced, bulls and females for the Foxhillfarm herd. Tapped as Reserve Female Champion to the Foxhillfarm heifer was another Wilodge Cerberus offspring from Garry Patterson, the August 2016 born Aultside Mystique.

Onto the juniors and Mr Ridley had tapped out Grahams Natalie as Junior Female Champion and then Overall Junior Champion before she went onto take the Junior Interbreed Championship. In a one-two for the Graham Family Reserve Overall Junior Limousin Champion, and Junior Male Champion, was the young bull Grahams Nashville.