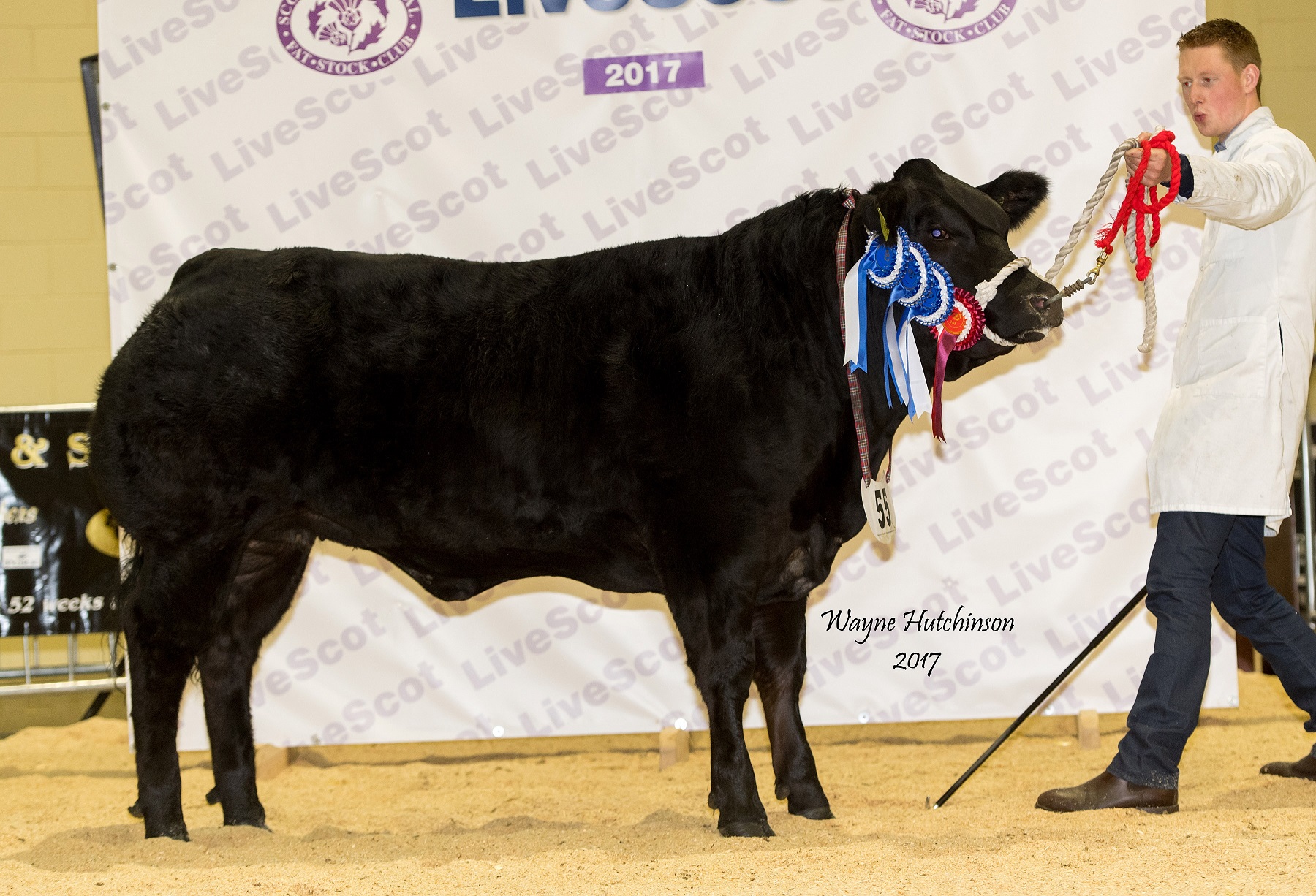 Limousin crosses secured the majority of leading prizes and made the top sale price of £3,900, in a strong prime cattle section at the 2017 LiveScot event, held at Lanark Market on Saturday 25th November.

Judge Harry Brown, of North Auchmaliddie Mains, Maud, Peterhead, described the standard throughout as ‘tremendous’ and said he was looking for a balance between “finesse for the show ring, and something that will kill well”.

He found this in his Reserve Overall Champion, a Limousin cross heifer from Andrew Ewing, Drumbretton, Annan, who was showing at the event for the first time, with his 18-month-old Lakeland Lady, a 595kg daughter of Hollows Finn, out of a Limousin cross dam, which had been placed Champion and Reserve Interbreed at Dumfries Show in August.  Bought at a sale in Cockermouth, which Andrew had been judging and placed her Champion, she was bred by RW & JH Emmott, Wythop Hall, Embleton. She went on to make the top price at the sale, selling at £3,900, also to Anthony Kitson Butchers.

In the steer classes, best Overall was No Frills Frazer, a 608kg Limousin cross from James Nisbet, Sorn Mains, Sorn. Sired by Lodge Hamlet and out of a cross dam, he was bought at Brechin in February this year and stood Reserve Steer Champion at the Royal Highland.

Reserve to that one in the Steer Championship was a home-bred 510kg Limousin cross from Iain Lammie, Longhouse, Cumnock. On its first outing, this one is by Powerhouse Elite and out of the show heifer, Bonnie Lass.

Housewives’ Choice was Wonky Tonky, a 17-month-old Limousin cross heifer by Lodge Hamlet from Dougie McBeath and Sarah Jane Jessop, Lower Greenyards, Bannockburn. Out of the Limousin cross show heifer Oops a Daisy, she went on to sell for the day’s joint second top price of £3,600, to WTS Forsyth and Sons, Peebles.

Limousins were again to the fore in the Baby Calf Championships, won by Gavin Scott, Gateside, Linlithgow, with Do Da, a January-born home-bred daughter of Melbreak Hero, while Reserve went to Robert Graham, Airthrey Kerse, Bridge of Allan, with Grahams Nora, an April-born calf by Kilcor Iceman.