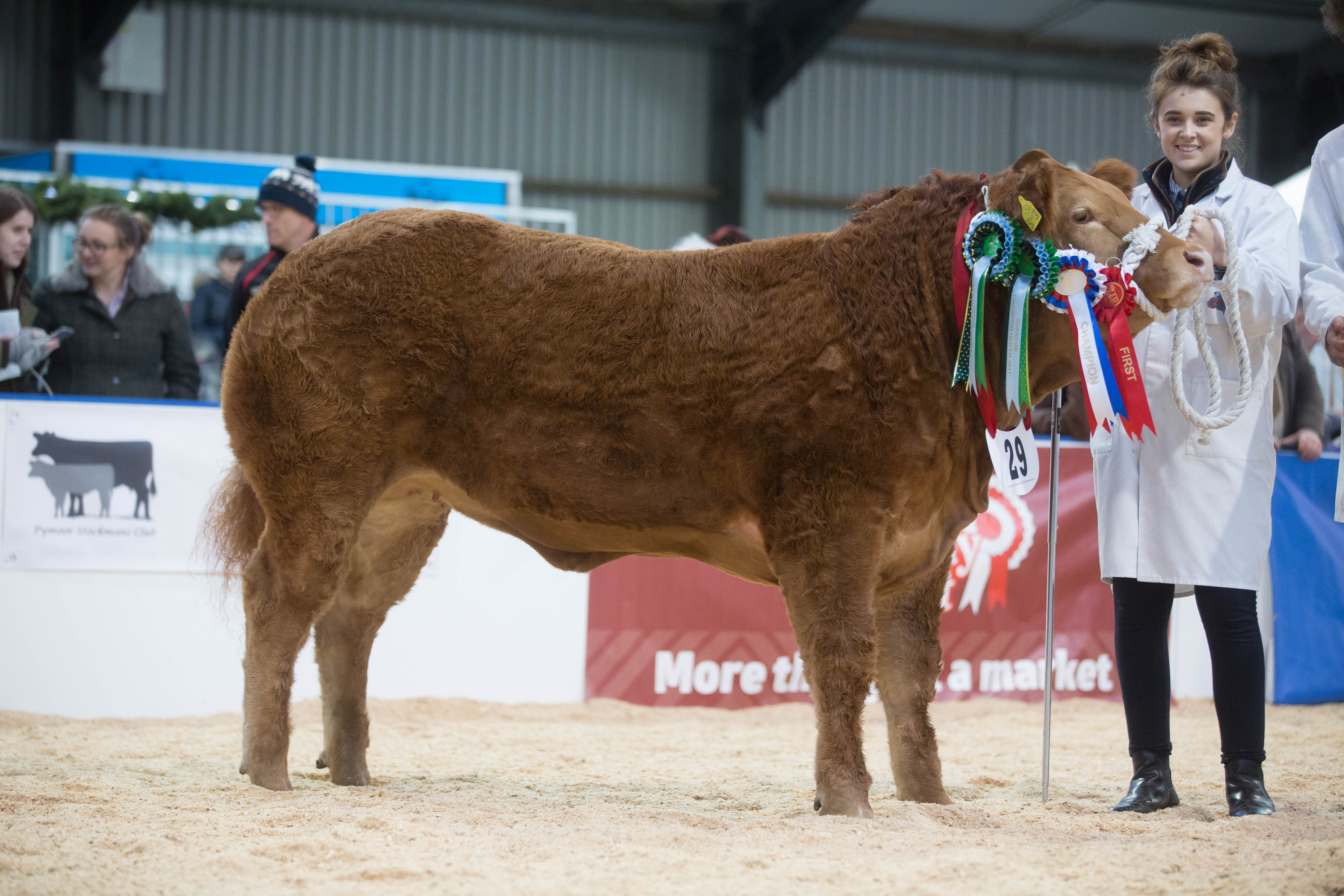 Colin Phillips, highly respected stockman and renowned judge, led the cattle judging. Mr Phillips, who farms in Herefordshire, has achieved great success in the showring and has judged at many of the country’s leading agricultural shows.

In the commercial section he tapped out the Limousin sired heifer Garnedd Model as his Supreme Champion. Weighing in at 564kg the September 2016 born heifer from Beth Wilkinson and Luke and John Smith-Jackson went onto sell for an impressive £6,000 in the traditional post-show sale. The smart heifer was bred by Messrs Jones, Betws-y-Coed, Conwy. Out of Garnedd Joy she is by the Ampertaine Elgin son Trueman Idol.

Topping the Baby Beef classes was the Continental Champion Dancing Queen from John Smith- Jackson, who runs the Hightown herd at Haltwhistle, Northumberland. The June 2017 born Limousin cross heifer came to Peterborough with some success under her belt already having been placed second in her class at Borderways Agri-Expo earlier in the Autumn. In what was a one-two for Limousin the Reserve Baby Beef Champion came in the form of the March 2017 born Limousin cross Jazzy Girl from Richard and Judy Fountaine, Hill Farm, Beachampton, Milton Keynes.

In the pedigree beef section Colin selected the Limousin heifer Buarth Magic from Ifan Phillips, Camarthenshire as his Champion Pure Bred Beast. September 2016 born she is by Sarkley Goddard out of Buarth Irene.

The Limousin classes saw Gascoines Mrgeorge take the honours as Breed Champion. The November 2016 born home-bred bull from the Gascoine Group Ltd, Nottinghamshire, is by Mereside Hallmark out of Gascoines Gabriella. Bred by the Hazard family at Grantham, Hallmark was purchased at Carlisle for 18,000gns back in February 2014 after winning the Iintermediate and Overall Championship in the pre-sale show. He is by the Objat son Dormeur out of the Vagabond daughter Mereside Enabel.

Reserve Breed Champion was Pointhouse Midnight from Barney O’Kane and Sons, Co Derry, Northern Ireland. The 12-month old heifer is by the Wilodge Vantastic and Bankdale Amber son Plumtree Fantastic and out of the dam Pointhouse Fern.

Rounding off the day for the breed was the Reserve spot in the Duke of Gloucester Pedigree Calf Group of Three Contest which was judged by Dan Bull, Lambourn, Berkshire.