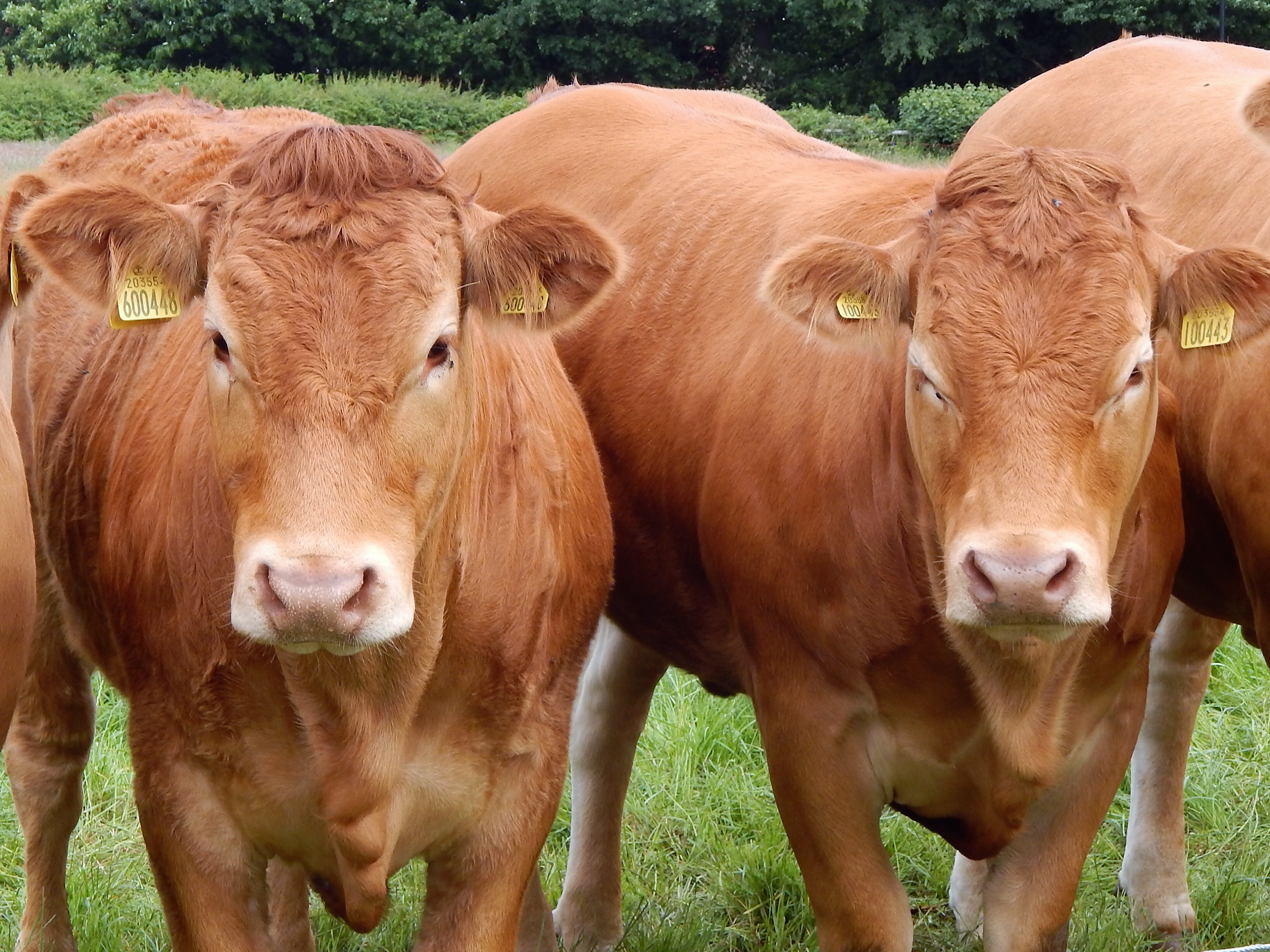 Firmly established in an urban area of the West Midlands the pedigree herd of Roughley Limousins has played an integral part in propelling Chase Farm into the successful diverse business it is today. In this article we look at the enterprise managed by John Temple and Dorinda Dixon in more detail. 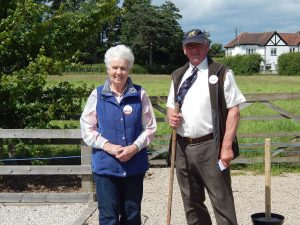 In the period after the war Chase Farm itself had been part of the well-known Midlands based Walter Smith butchery operation, however, in 1980 the farming business became an independent business under the title of Walter Smith Farms Ltd. Still managed by the same executives almost 40 years later, former Walter Smith directors John Smith and John Temple, the enterprise is barely recognizable from its early days when it sold eggs out of a shed, turkeys at Christmas and potatoes and vegetables on behalf of local farmers.

Throughout the 1980’s under the watchful eye of John and Dorinda Chase Farm started to build the Roughley herd of pedigree Limousin cattle. The herd was established with the purchase of their first pedigree animal at the Burton Dispersal in 1980 and some key acquisitions from Carlisle. In the early years John and Dorinda were kept very busy showing at premier shows and sales throughout the Midlands and further afield, attaining some degree of success. As the reputation of Roughley Limousin spread they exported semen from a home bred bull, Roughley Ultrabright, to herds in South Africa, Australia and to the noted Wulf family in North America. Ultrabright, by Circle Maximillian was out of Harvest Orchid, one of the early females the pair had purchased at Carlisle. In addition to the overseas semen trade embryos made their way to New Zealand and five heifers were exported to South Africa. However, in a sad turn of events for Chase Farm, what looked to be a promising international trade came to an abrupt end with the onset of the BSE crisis in the late 1980’s. 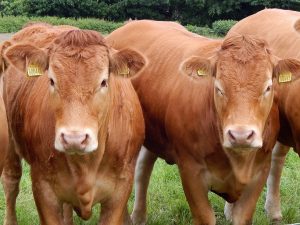 In the years following the BSE crisis the farm needed to find some additional income to survive, and so expanding the farm shop seemed a very obvious thing to do.  The two Chase Farm directors had considerable experience to bring to the development of a more substantial retail operation and they made an agreement with their old company Walter Smith to give them support in building a farm shop business.  John took the decision to relocate what was then a small outlet to an old dairy building, and crucially, he made the decision to start to sell meat.

Having spent all his working life in the meat trade John knew the principles upon which the success of the Limousin breed had been built would fare very well with his then rapidly expanding customer base. He believes that these values are as true today as they were when he first became attracted to the breed almost 40 years ago.

He says “Limousins are fundamentally a butcher’s animal with a very good meat yield which consistently meets the demand of the market”.

Having lost half their land to the development of the M6 Toll road at the turn of the new millennium Chase Farm today consists of just 50 acres, approximately 40 of which is on one side of the Toll road and 10 on the other.  In 2008, working in close conjunction with Dorinda, John decided to concentrate more on the pedigree Limousin herd which he had started back in the 1980’s.

Today the pedigree herd consists of around 28 cows largely managed by Dorinda, most of which calve in the spring. The low maintenance requirement of the Limousin calves, particularly at birth, is something Dorinda is particularly attracted to. Although a few bull calves have been on the larger side, cesareans are infrequent and survival rates very good. Replacement heifers are retained as required, which means that no cattle are brought into the herd. The real motivator for this is John and Dorinda’s ardent desire to protect the herd’s heath status, so much so, with a degree of sadness, they no longer show any cattle. The herd has been in the SRUC’s premium cattle health scheme for 13-years, having been free of Johnes and BVD for all this time. They are fortunate enough to farm within a ring-fenced area which is a great asset to maintaining the high degree of bio-security they insist upon. 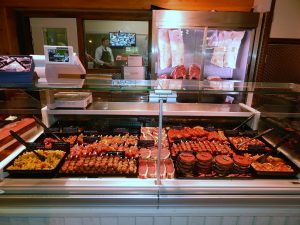 The entire cohort of females is served by artificial insemination and John and Dorinda pay particular attention to calving ease EBV’s, gestation length and milk figures when selecting Limousin semen to use on the herd. In recent years they have also become very interested in knowing the Myostatin genotype of the sires they are selecting. Both are pleased to hear that the Society has announced the automatic publication of all Myostatin genotypes in 2018.

John says “I very much welcome this initiative; it’s a positive one for the Society and its breeders. I believe that it is important to present Myostatin results for everyone so that we are delivering knowledge and choice into the commercial market place”

Any cattle, both male and female, not considered good enough for breeding are sold through the farm shop and café which means that the business gets the maximum return from the process of adding the value to the carcase itself.  Aiming to finish at U+3 grade bulls are slaughtered from 13-months of age while heifers are routinely taken up to 20-months.  The cattle go for slaughter to a local abattoir Westwood’s at Chase Terrace, Walsall; a journey of just 40-minutes.

While still trying to support the pedigree sales at Newark when possible, these days’ surplus breeding cattle are increasingly sold privately from the farm.  John firmly believes ”Seeing the stock in their working clothes in their home surroundings is a big plus for intending purchasers”

Cattle are housed between October and November, depending on the weather conditions when the spring born calves are weaned.  The cows are fed on big bale silage with minerals and liquid feed supplements. The bulls, which are kept entire, are fed to appetite on a bought-in blend with a target of them to put on an average of 1.5 to 2.0kg per day. Heifers are over-wintered on ad-lib silage with a small amount of blend to encourage them to develop. From the spring onwards customers visiting the farm are able to see the cattle grazing in the fields by the café car park. John and Dorinda are proud of the positive signal this sends to their customers of all ages. 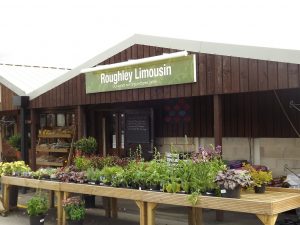 In just a few years from its formation Chase Farm Shop had established the standards that customers still recognize today, outstanding meat, beautifully butchered. John says “The choice of Limousin cattle together with traditional butchery skills and a careful on premises maturation process is the reason why our customers keep on coming back”.

Specializing in the supply of cattle for a butchery retail market requires an unerring eye for selection and attention to detail throughout the production system. John and Dorinda clearly manage to fulfil both these requirements.

Walter Smith enjoyed a close relationship with the farm shop during its early years and over time the businesses have learnt a great deal from each other.  Walter Smith, which moved out of private family ownership to a management and director buy out in 2009, have gone onto open shops in large Garden Centre’s using much of the experience they gained from the growth of the retail enterprise at Chase Farm.

In 2015, with his long established association with the breed behind him John was honored by the British Limousin Cattle Society who appointed him their President. This was a clear tribute to his continuing support for the breed over many years, his expertise, and for the consistently high standards achieved in the Roughley pedigree Limousin herd.

No stranger to success, the herd has just been awarded the title of Champion Small/Medium Herd in the 2017 North West Midlands and North Wales Club Herd Competition. While they have won this award before John and Dorinda are delighted to have received this recognition again. However, the real cherry on the cake was their young heifer Roughley Nancy winning the Best Heifer born in 2017 title against some formidable opposition from notable herds. The stylish January born heifer is by the Willodge Tonka son Kaprico Eravelle out of the Ampertain Foreman daughter Roughley Janey.

While there is a lot of history at Chase Farm John and Dorinda are still very much focused on the future and it is clear that the farm and the cattle are at the forefront of their minds. It is their inspiration and hard work over many years which have gone into making both the farm and the retail business successful in their own right. There is little doubt that the Limousin breed has played a fundamental part in this and will continue to do so in the future.