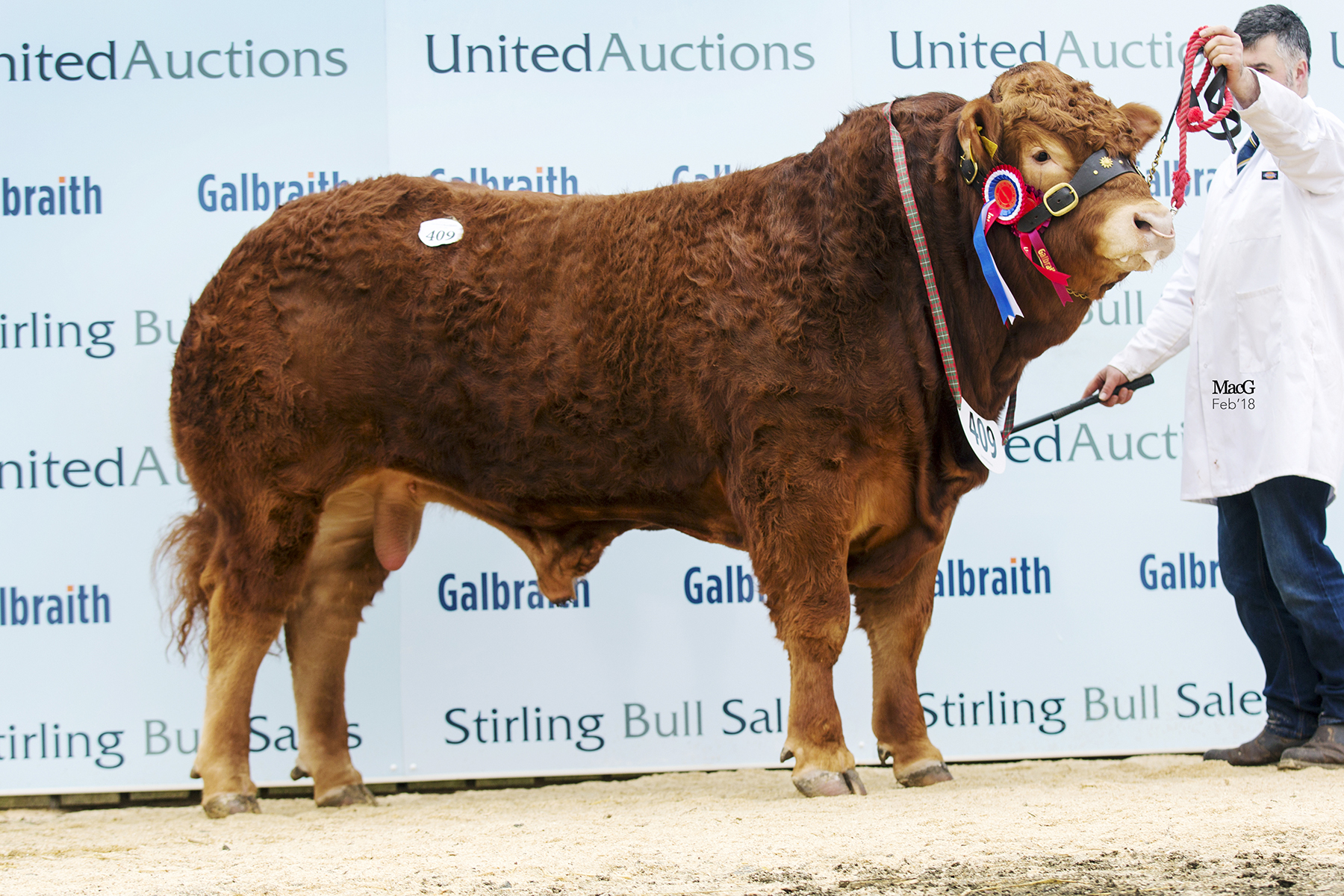 Strong and steadfast demand highlighted the sale of Limousin bulls held at United Auctions Stirling market on Monday 5th February. The opening major British Limousin Cattle Society sale of the year saw some competitive bidding by the ring with averages well up on the year, by over £700, to £5814 for the 62 bulls sold. A clearance rate of 81% demonstrated the depth of support for the breed which has clearly turned into the new-year with the healthy momentum generated throughout 2017. A particular feature across the Society sales during the autumn 2017 was the demand for easy calving genetics; this was still very evident as the sale at Stirling progressed. Three bulls made over five figures with 31 in all selling at 5000gns and more.

Leading the way, and making the top price of 13,000gns, was Dyke Macbeth from the prolific Dyke Limousin Herd of Jimmy and Donald MacGregor, Milton of Campsie, Glasgow. This May 2016 born bull had earlier in the day secured the Intermediate Championship in the pre-sale show in front of the judge Ian Nimmo from the noted Maraiscote Herd at Bogside Farm, Newmains, Wishaw. A natural calf, Dyke Macbeth is sired by Netherhall Gilbert, a Haltcliffe DJ son, and out of Dyke Florette.

Purchasing the top price was R Dunlop & Son for their 130 head commercial suckler enterprise at Pinvalley Farm, Girvan, Ayrshire. Commenting Rodger Dunlop said: “He was the stand out bull on the day for me; he caught my eye as soon as I saw him. He has tremendous muscle, an all-round very good bull”. Not new to buying Limousin bulls for his herd at home Robert went onto say that he is certain Macbeth will give him “exactly the kind of calves he is looking for”

With a comprehensive track record at Stirling, the Dyke herd arrived at the mart with a strong lineup of bulls for sale. Earlier in the sale, the May 2016 born natural calf Dyke Magical had made 8,500gns in selling to commercial buyers A & R Paton, Avonbridge, Falkirk. Magical is by the Fieldson Alfy son Dyke Gandalf and out of Dyke Hermione. Two other bulls from the Dyke stable made over 5,000gns resulting in a solid day of trading for the MacGregor family that saw six bulls in all sell to an average of almost 7,000gns.

Speaking about the day Jimmy MacGregor said “We are delighted with the outcome of the sale. We knew we had a good team at home, and they didn’t disappoint on the day. We had a great deal of interest by the pens after the judging and were pleased this translated into strong demand for our cattle and secured us our highest Limousin sale price to date at Stirling”.

Two bulls sold at 10,000gns, the first, and highlighting a ready demand for some quality black Limousin bulls on offer, was Goldies Black Manhattan from Bruce Goldie, Townfoot Farm, Mouswald, Dumfries. This April 2016 born bull had earlier in the day secured the Overall and Senior Championships in the pre-sale show. A natural calf, Goldies Black Manhattan is entirely homebred being sired by Goldies Fortress, the Wilodge Vantastic son and out of Goldies Dalmation. In securing the Overall Championship Black Manhattan delivered a first for the Limousin breed. While black coated bulls have topped previous Stirling sales, this is the first time one has taken the Overall Champion position. He was knocked down to pedigree breeder John Elliot, Roxburgh Mains, Kelso.

Described by Bruce Goldie as a “small calf at birth” Black Manhattan is the same way bred as Goldies Black Jonah who was Reserve Junior Champion at Stirling back in February 2016.   No stranger to success at Stirling, Bruce Goldie commented “While it is fantastic to secure the Overall Champion position here at Stirling for the second year in a row, it is made even more special by the fact that this it is also a first for the breed”

Next up at 10,000gns was the winner of the youngest class Creran Mourinho from Ewen MacGillivray, Home Farm, Barcaldine, Oban who was bringing his first Limousin bull for sale to Stirling. This August 2016 born natural calf is by Powerful Irish and out of Lodge Iccolo. He was knocked down to another commercial buyer, Fisher Contracting Ltd, Groan Farm, Perth.

Selling at 9,500gns was Ronick Material, from Mr R Dick, Mains of Throsk Farm, Stirling. He had stood second in his class to the Champion Goldies Black Manhattan. This April 2016 born bull is by the Ronick Gains son Stephick Hero and out of Ronick Fatella. Again going to a commercial herd, this time further afield, he sold to regular Limousin purchasers at Stirling, L D Carr & Partner, Upper Higham Lane, Rushden, Northants. Also at this price came the Ronick Hawk son Hollyberry Marius from A & V Brown and Sons, Swallow Cottage, Foggathorpe, Selby. The June 2016 born bull is out of the Wilodge Cerberus daughter Whinfellpark Gazeful. Another bull staying in Scotland, he sold to T Lang, Parduvine, Mid Lothian.

Two lots made 9,000gns. The first Walkers Mandit came from Mr P A Walker, Dunnottar, Stonehaven. This June 2016 born bull is by Allanfauld Gazza and out of Walkers Hereclissa. The purchaser was yet another commercial buyer in the shape of Huntlyhill Farms, Lanark. Just a few lots later came the class winner Burnbank Mccoy from Messrs D & L Graham, Mains of Burnbank Farm, Blairdrummond, Stirling. Also born June 2016, this Cloughhead Umpire son is out of Burnbank Clover. He was knocked down to A & E Grant, Blairgowrie, Perthshire.

The Scottish Government Bull Stud made a total of four purchases on the day. Included within the Bull Stud’s purchases, was Glams Black Magic from A & J Adam, Newhouse of Glamis, Glamis, Forfar. This black coated July 2016 born bull by Millington Ferrari and out of Westhall Jemima was their top priced purchase at 6,500gns. Another first for the breed it is the first black coated Limousin to be heading to the Bull stud at Inverness.