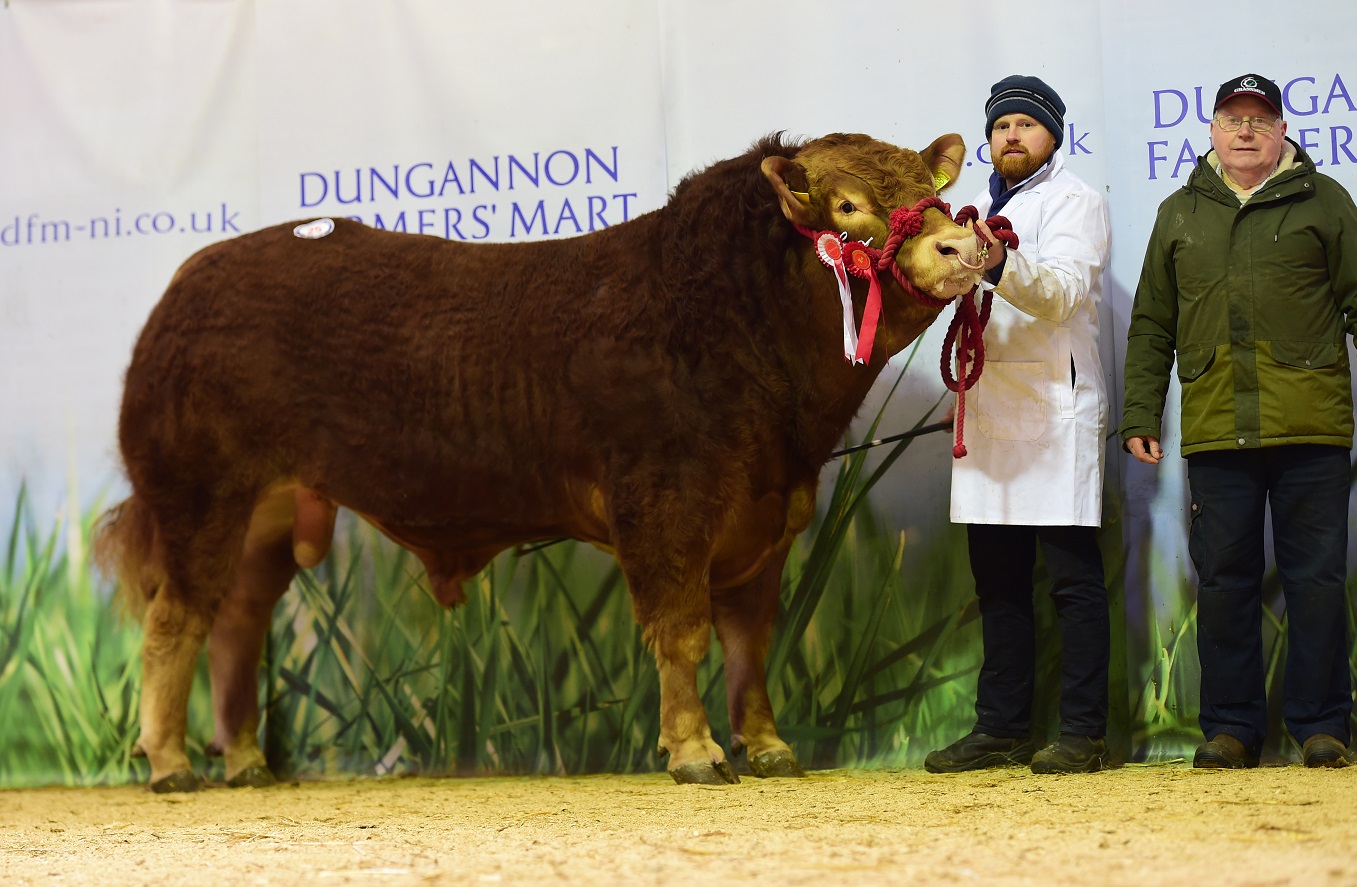 There was solid demand for Limousins at the British Limousin Cattle Society’s (BLCS) Bull & Female sale at Dungannon on Monday 12th February. Despite heavy snow showers overnight the sale attracted an impressive number of buyers and achieved a clearance rate of 91% with 20 bulls heading to new homes throughout Northern Ireland. As 2018 gets underway and the seasonal round of pedigree sales is in motion, following on from a great day at Stirling recently, the sale provided yet more evidence of the sustained demand for the traits the breed consistently delivers to the market place.

Gleneagle Master led the way when going under the hammer for 6,000gns. At this price it meant that the sale topped out 1,000gns ahead of last year. The August 2016 born bull, an embryo calf, came to the sale with a Beef Value of LM+43, well into the top 10% of the breed. He combines the notable breeding of Sympa with Ampertaine Ikea, a strong Ampertaine Foreman cow. His dams breeding line goes back to the notable Sharon family which has bred numerous five figure bulls. Gleneagle Master, who had been tapped out as the Intermediate Male Champion in the pre-sale show by Judge Richard Law from Ballinamallard, Co Fermanagh, was consigned by Mr J B O’Kane, Coleraine, Co Derry, and was knocked down to M & M Robinson, Richhill, Armagh.

The Gleneagle herd also sold Gleneagle Maverick at 4,800gns, the second highest price of the day. Maverick had taken the Junior Male Championship, Overall Male Championship and then Supreme Championship in the pre-sale show, so attracted keen attention from buyers. This October 2016 born bull, another embryo calf, is sired by Gerrygullinane Glen and also out of the Ampertaine dam Ikea.   Maverick was purchased by P Broome, Ballynahinch.

Reserve Overall Supreme Champion and Reserve Junior Champion, Rahoney Mordecai realised 3,700gns for Messrs H & D McFarland, Trillick, Co Tyrone. This November 2016 born bull, also with a Beef Value in the top 10% of the breed, is by the Wilodge Vantastic son Moloskey Ger and out of the dam Rahoney Gospel. He went home with Marshall Wright, Lisnaskea, Co Fermanagh.

Newhillfarm Mike, a Kaprico Eravelle son, sold for 3,600gns. Homebred by M & A McPolin, Cabra, Newry, Co Down, this December 2016 born bull is out of the dam Newhillfarm Jordan. He was purchased by Sean McConvey, Ardglass, Co Down.

The Reserve Intermediate Champion in the pre-sale show Kilclass Maestro sold for 3,200gns. Bred by Dermot McCusker, Castlewellan, Co Down this July 216 born bull is by Norman Ely and out of the dam Larkhill Ida. Maestro now heads to E D Sherrard, Aughnabrack Rd, Belfast.

Casey Monty, a Loosebeare Fantastic son, from Owen Casey, Newry, Co Down was knocked down for 3,100gns to A McNeice, Keady, Co Armagh. The June 2016 born bull is out of the dam Slieve Gem. At the same price came Carnew Maverick an August 2106 born bull by the noted Lynderg Hero and out of Carnew Uptowngirl. Consigned by Messrs J & J Aiken, Dromore, Co Down, Maverick now heads to David Foster, Derrylin, Co Fermanagh.

Top priced female at 2,400gns came in the form of the oldest catalogued entry and the first female into the ring, Mountscott Kristina owned and exhibited by G N Martin, Dromore Co Down. This October 2015 born female, bred by Mr M Sexton, Aheybridge, Co Clare, is sired by the Objat son Emerson and out of the dam Mountscott Guna. She now heads to a new home with Derek Johnston, Fivemiletown, Co Tyrone.

Second top female price of 2,200gns went to Rahoney Mandy from Messrs H & D McFarland. The July 2016 born heifer is by Rahoney Hosea and out of the dam Rahoney Damaris. Mandy, full sister to the Champion Female and Reserve Overall Champion at Ballymena in May 2017, now heads to F Tannahill, Macosquin, Coleraine.

Rahoney Mary, also from the McFarland stable, sold for 2,000gns. April 2016 born she is by Rahoney Jethro and out of the dam Rahoney Indiana. She was bought by Robert Matthewson, Newtownstewart, Co Tyrone.