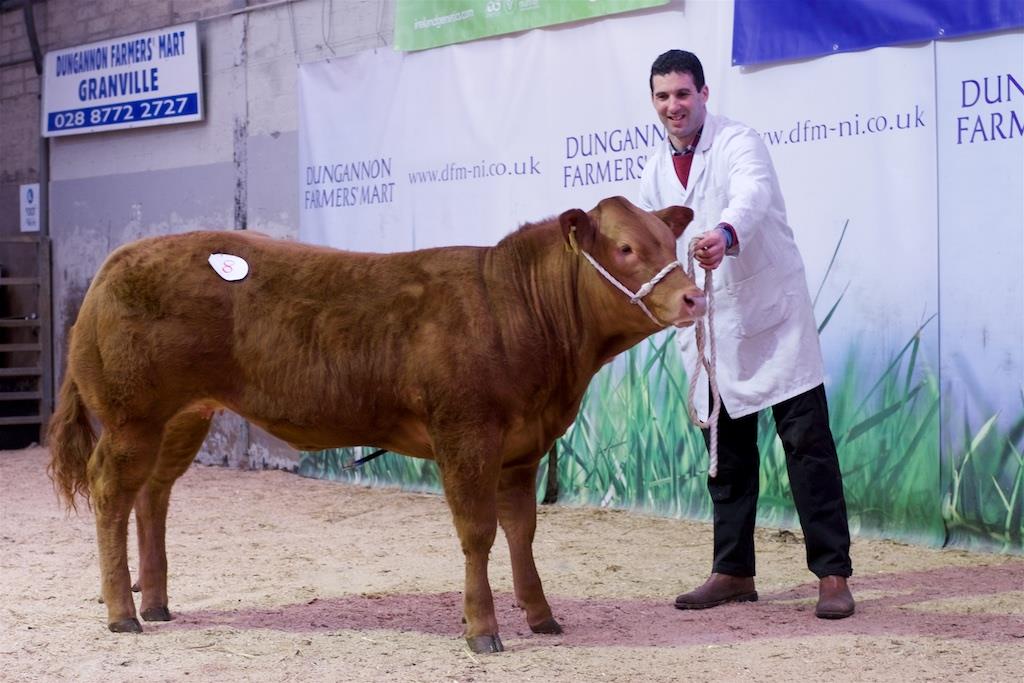 All roads led to Dungannon Farmers Market, Northern Ireland, on the 26th February for the return of the National Beef Association’s NI Beef Expo. For the first time the event played host to the highly renowned Stars of the Future Calf Show and Sale, coordinated by the NI Commercial Cattle Exhibitors Club.

The sale has always been a perfect opportunity for buyers to snap up some top-quality calves ready for the showing season and this year’s event certainly didn’t disappoint. A very smart 10-month old Limousin cross heifer from Alan Veitch, Lisbellaw, Fermanagh stormed to a superb price £8,000. According to Trevor Wylie, auctioneer at Dungannon Mart this is a record price for any crossbred animal of any breed sold in Northern Ireland. By the well-known sire Lodge Hamlet the heifer is the first calf to be sold out of the record priced 2012 Welsh Winter Fare £8,200 heifer calf from Brian Jones, Bailea, Sennybridge.

Speaking after the sale, a clearly delighted Alan commented “I always knew at home that she was a fine calf, so came here with a good feeling. However, the days result has absolutely blown me away, I am completely over the moon, it feels totally unreal and I am not sure I will get much sleep tonight”

The pre-sale show got underway with the first of the two Limousin heifer classes. Under the watchful eye of Judge Mr James Nesbitt, Emmett Kelly, Augher, took first and second place with his pair of calves. Both these heifers are also by Lodge Hamlet and both are out of Limousin dams. The Judge followed what he had done in the first Limousin heifer class and placed another black-coated heifer as winner in the second class. This time it came in the shape of a Gerryguillinane Glen daughter from Jack Smyth, Newtonstewart. The dam of this smart heifer, which went onto be tapped out as the Overall Limousin Champion and then Champion Breeding Heifer, was the Overall Champion at the club show in 2016. She went onto make £4,000 in the sale when selling to Gary Corrie, Newtownards, Co Down. The Reserve Limousin Champion was an exhibit from Shane Doyle, Kilkeel. The heifer, which had been overall calf Champion at Allams last year was knocked down to well-known Aberdeenshire-based commercial cattleman Blair Duffton for £4,100.