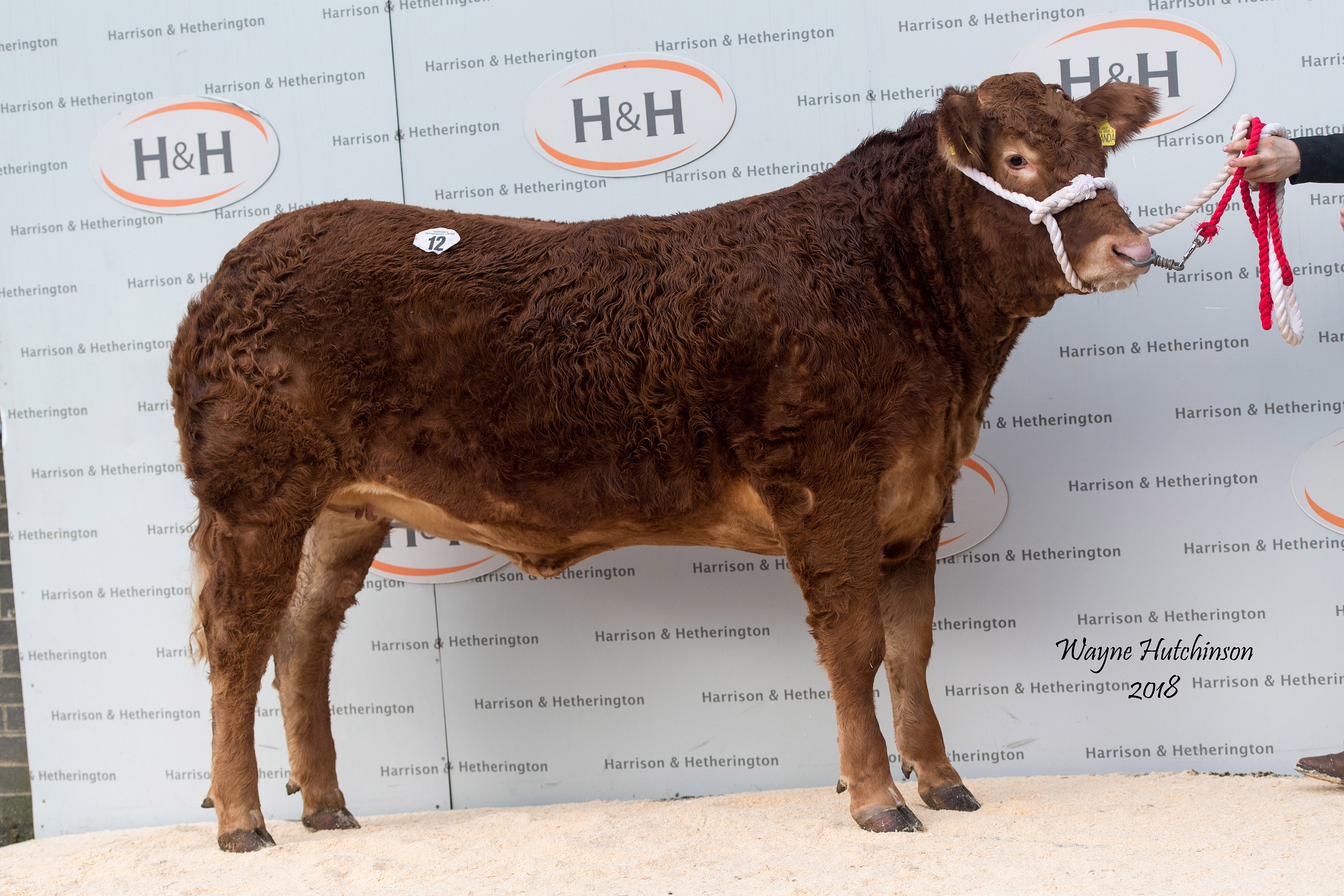 An embryo calf born in May 2016 Trueman Miranda carried a depth of pedigree being by the 140,000gns Limousin world record holder Trueman Jagger and out of Trueman Honey. Trueman Honey was herself the Reserve Female Champion at the 2014 RUAS Balmoral Show and is a full sister to Trueman Euphonium who won the British Limousin Cattle Society’s 40th Anniversary National Show in 2011. Purchasing the top price was M&JC Gould for their establishing Woodmarsh herd at Grange Farm, Bomere Heath, Shrewsbury.

The sale, mainly comprising of heifers, saw 56 of the 61 females forward sell to average £1915.

The first lot in the ring was the six year old cow Tomschoice Hailey from JM & SP Cooper, Hill Top Farm, Dacre, North Yorkshire who made 3000gns. Sired by Haltcliffe Vermount and out of Tomschoice Celestial this third calver was bought by Rodger Quinn, Swatragh, Co Derry, for his Quinliz pedigree herd.

At 2900gns was Loughhead Lauren from Jim & Elaine Pattinson, Bonshawside Farm, Kirtlebridge, Lockerbie. Sold with her first calf at foot, the bull calf Loughhead Lincoln, Loughhead Lauren is by Netherhall Gallant and out of Wilodge Candream.   Taking this outfit home was Mr S Gilleard for his Thorninghurst herd at Thorninghurst Farm, Sour Lane, Thorne, Doncaster.

Another from JM & SP Cooper, Tomschoice Iamar, made 2400gns. A third calver born in January 2013 this young cow is by Kaprico Eravelle and is out of the same dam as the first sale lot, Tomschoice Celestial. Underlining that buyers were from all corners of the UK, this cow was sold to the BLCS Society Chairman, Michael Cursiter for his Dwarmo herd at Arwick, Evie, Orkney.

Four lots in all were forward from the Tomschoice herd and Tomschoice Duet made 2400gns when being knocked down to Andrew Ewing, Dumbretton Farm, Annan. 2008 born Tomschoice Duet is by the famous AI sire Ronick Hawk and is out of Tomschoice Allegro.

Late in the catalogue the May 2016 born Gunnerfleet Misscindy from Ian Handley, Gunnerfleet Farm, Chapel Le Dale, Ingleton, Lancashire, sold for 2300gns to Mrs C Dulson, Bickerton, Nr Malpas, Cheshire for her Ridley pedigree herd. This heifer is by the 17,000gns herd sire Maraiscote Graffiti and is out of Gunnerfleet Cindy.