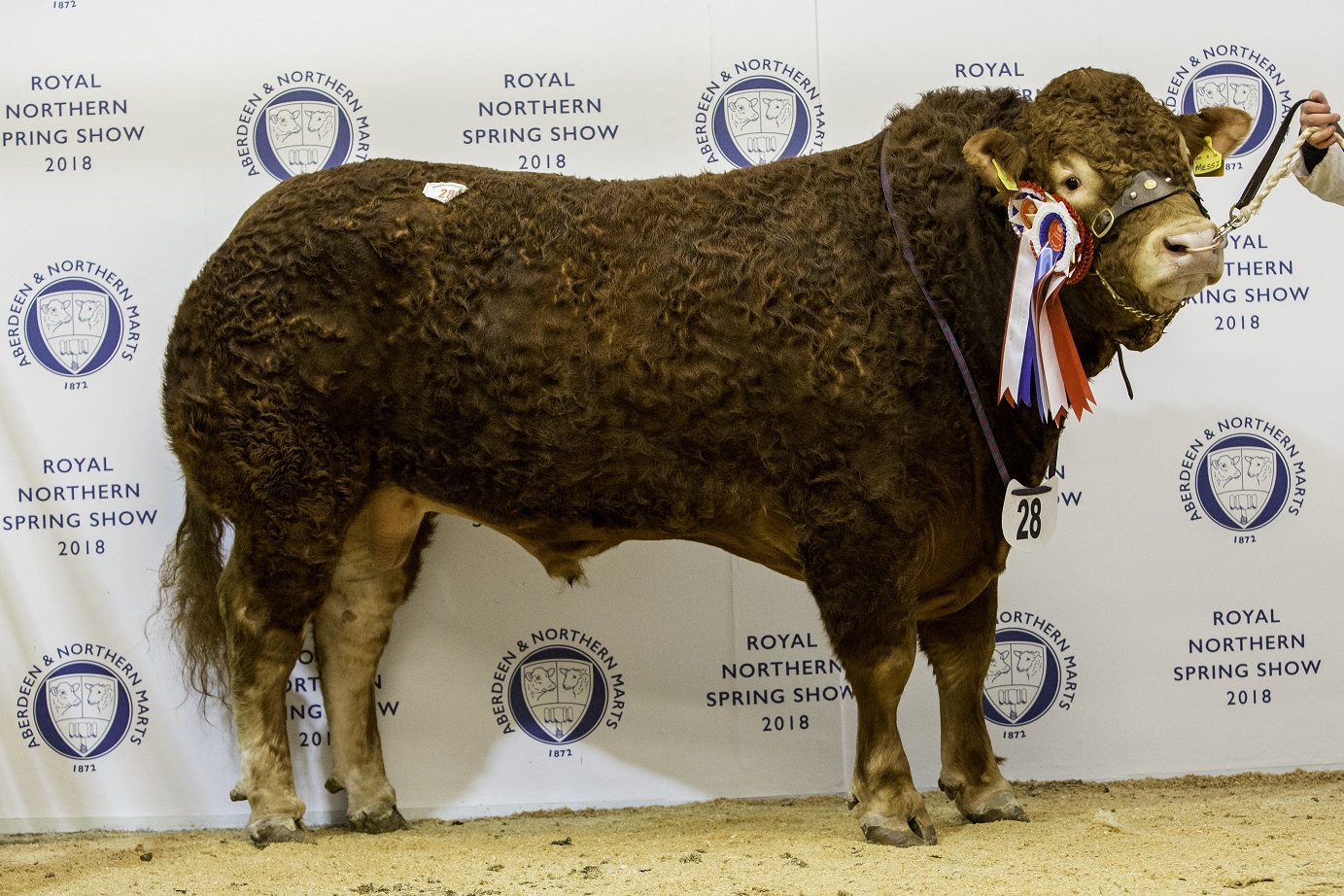 Sired by Emslies Gladiator and out of the Proctors Cavalier daughter Emslies Ingrid, this 23-month-old bull had earlier picked up the Limousin Supreme Championship and the Overall Supreme Championship in the pre-sale show judged by Alan Lawson, South Farm, Hallington, Newcastle. Purchasing the top price was J A Cruickshank, Coleburn Farm, Elgin.

Taking the second top price at Aberdeen was Fodderletter Maestro at 5000gns from Mr W Robertson & Son, Tomintoul, Ballindalloch. July 2016 born, this bull is by Spittalton Gold and is out of the Kype Vine daughter Vaenol Gina. Maestro was bought by D M McCallum, Culbokie, Dingwall.

Selling at 4800gns was Knock Maverick from Mr A G Howie, West Knock, Stuartfield, Peterhead. This March 2016 born bull is by the Wilodge Vantastic son Goldies Goldfinger and is out of the Jockey daughter Knock Ailsa. Buying Maverick was G Ramsay & Son, Auchindoun, Keith.

Next up was Shannas Macallan from Mr and Mrs J Penny, Shannas, Clola, Peterhead, at 4200gns. This April 2016 bull is by the Ampertaine Bravo son Goldies Emperor and out of Shannas Gin. Macallan makes his way to Orkney with M Delday, Quoy Belloch, Deerness. John and Margaret Penny followed this with 4000gns for Shannas Mormond. This April 2016 bull, by the Haltcliffe Underwriter son Craigatoke Bart and out of Shannas Dolly was bought by G M Barclay & Sons who run the Tullo Limousin Herd at Garvock, Laurencekirk.

At 3950gns came Lettoch Max from Colin Stuart, Braes of Glenlivet, Banffshire. First in the ring and the oldest bull in the sale at two years of age this bull is by Ballinloan Geronimo and out of Lettoch Fern. Buying Max was D Whyte, Hindstones, Fraserburgh.

The Overall Reserve Limousin Championship in the pre-sale show went to Westpit Milton from Messrs A & J Gammie, Drumforber. The June 2016 born bull is by the Swardland Eddie son Jalex Itsallgood, and out of the Vagabond daughter Greenwell Dior. Milton, who is full brother to last year’s Spring Show Limousin Champion Westpit Lampard, went onto make 3800gns in selling to W S L Muir, who run the Corrigall Limousin herd at Upper Onston, Stenness, Orkney.

Despite the weather providing a severe challenge to both vendors and purchasers, in all fourteen out of the seventeen bulls forward sold to average a solid £4101.

At the show and sale of exhibition cattle, judged by Mark Harryman, Swainsea Barn Farm, Pickering, the overall champion and champion heifer was an 11-month-old Limousin cross consigned by J Robertson & Co, Newton of Logierait, Pitlochry. This 376kg homebred entry was sired by Powerhouse Harlequin and realised £7,800 in selling to Donald Morrison, Cairnulla, Kinlochberrie.

In the bullock section, the champion entry was another success for the breed in the shape of an eight-month old Limousin cross Mr Muscle from J McConachie, Lethendry Farm, Cromdale. Mr Muscle sold for £1,700 to K MacIver, Mouir House, Auoch, Black Isle.