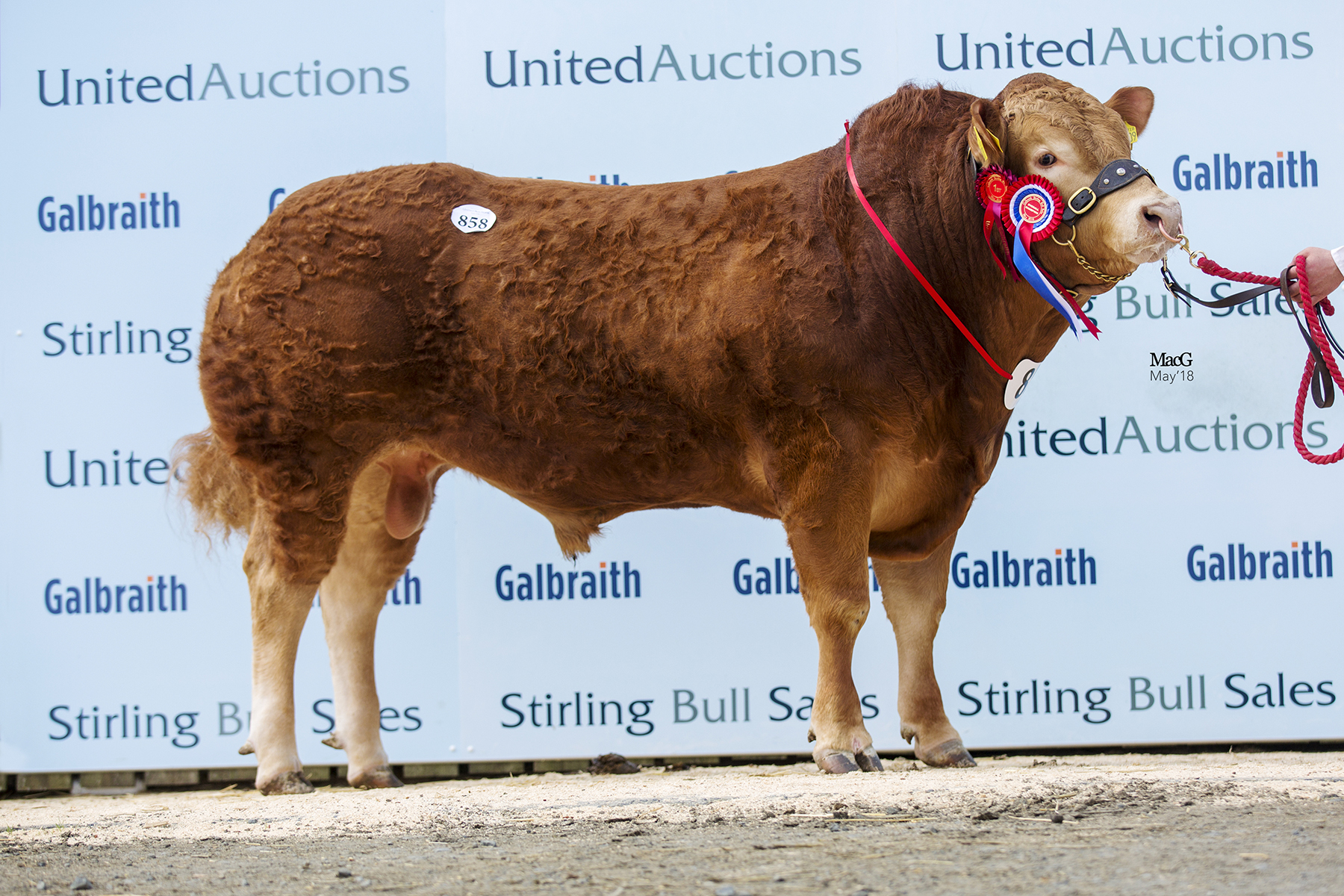 A great weekend of trading Limousin bulls continued in fine style at United Auctions Stirling Agricultural Centre on Monday May 7th when 44 out of 48 bulls forward (a 92% clearance) sold to average £4928, up by £903 on the year.

Leading the way at this multi-breed fixture, and with a new all-breeds centre record for this May fixture, was the 12,000gns Anside Magneto from the Anside herd of Mr & Mrs S Irvine, Braehead Farm, Drummuir, Keith.

This stylish October 2016 born bull is by the herd’s stock sire Powerful Irish and is out of Normande Bouquet. Purchasing the top price was Ian Wilkinson, Balgay Farm Cottages, Inchture, Perthshire who runs the Redstroke pedigree herd. Earlier in the day Anside Magneto had been placed as the Limousin Supreme Champion at the pre-sale show by John Duncan the well-known stockman at Dyke Farm, Milton of Campsie. Speaking after the show Mr Duncan said: “This was a really modern Limousin bull. He was a long clean bull; very well- muscled, and walked extremely well. He carried a lot of style and is a bull both suited for pedigree and commercial use.” The Championship and top price sealed a fine day for the Anside herd who sold six bulls in all to gross a mighty £43,890. The herd stock sire Powerful Irish has previously had calves up to 13,000gns and his first ten sons have averaged 7200gns. Anside’s further bulls sold for 7500, 7200, 5500, 5200, and 4400gns respectively.

Standing Reserve to the Champion, and second in the same class, was Brims Murphy from Messrs W&A Oag, Achiebeg, Shebster near Thurso who went on to sell for the second top price of 9000gns to the commercial producer G McCormick, Claggan Farm, Isle of Islay. This Ampertaine Gigolo son, November 2016 born, is the fifth bull calf to be sold at United Auctions sales out of the dam Brims Allover, a Ronick Iceman son.

Commenting after the sale the Society’s Chief Executive Iain Kerr said: “The demand for bulls was again strong and I’m delighted for the breeders that there was such a high clearance rate and a big lift in averages. Over the course of three days, some 190 Limousin bulls have sold at Society sales, and including females, to a total gross of £1,358,000. The breed is combining easy calving, ideal weights and age to slaughter, and feed efficiency. Add in marketability at any age and stage and it is an attractive package for commercial producers.”

At 7500gns was Anside Mercury, another Powerful Irish son from the Irvine family. From the same show class as the Champion, this November 2016 bull is out of the Pacha daughter Hudscales Eartha. A full brother to Mercury sold from the herd in October 2016 for 8200gns. Taking this bull home was TL Stirling, Auchterblair Farm, Carrbridge, Inverness-shire. Carrying on their strong day’s trading the Irvine’s first prize winning Anside Murphy made 7200gns when selling to A Sime & Son, Bruceland, Elgin, Moray. Another Powerful Irish son this October 2016 bull is out of the Frewstown Breakdance daughter Anside Gale.

Following on from a terrific sale at Carlisle some 48 hours earlier, the Goldies herd of Bruce Goldie, Townfoot, Mouswald, Dumfries followed that up at Stirling when selling a further six bulls to gross £31,395. Heading their consignment at 6500gns was the second prize winner Goldies Mighty. Another October 2016 born calf, Goldies Mighty is by Goldies Fortress and is out of Goldies Betty whose full brother previously sold for 11,000gns. Goldies Mighty was one of five purchases on the day by the Scottish Government Bull Stud, Longman Road, Inverness.

Having judged the Limousin show of bulls at Carlisle on 4th May Dougie McBeath, along with Sarah Jane Jessop, Lower Greenyards Farm, Bannockburn, got back to selling bulls when receiving 6500gns for their October 2016 born bull Springsett Marbles. Carrying plenty of breeding this bull is by Woodroad James, the Reserve Overall European bull of the year in 2016, and is out of the dam Majestic June who is a son of Ardglasson Highlander a previous Scottish Limousin Grand Prix Champion. Springsett Marbles was bought by R&D Farquhar, Tewel Farm, Stonehaven, Kincardineshire.

The first prize winner in the final class was Maraiscote Nibbler from Mr J Nimmo, Bogside Farm, Newmains, Wishaw. By the Irish sire Corlea Jetset, this January 2017 born bull is out of Maraiscote Jarre. Purchasing this bull was AM Bell & Co, Towie Farm, New Aberdour, Fraserburgh.